Paul Green calls it the toilet paper effect but says his North Queensland side won't fold under the hype surrounding Friday's NRL opener in their shiny new stadium.

Instead, Green has turned the tables on derby rivals Brisbane, saying it is opposition coach Anthony Seibold who is feeling the heat ahead of their round-one clash in Townsville. 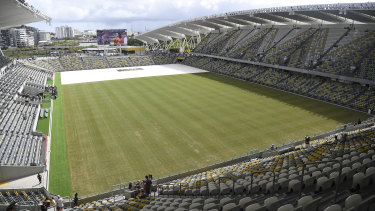 Coach Paul Green confirmed the Cowboys spent a night at the Queensland Country Bank Stadium to familiarise themselves with the new ground.Credit:Getty Images

Green likened the frenzy for tickets to the current rush to buy toilet paper, while also confirming his team had spent the night at Queensland Country Bank Stadium last week to familiarise themselves with their new home ground. 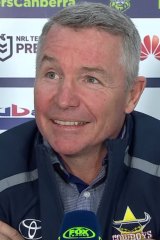 Green says the Cowboys are not feeling the pressure ahead of the season opener against the Broncos on Friday.Credit:ninevms

Set to be captained by a pair of 22-year-olds in Patrick Carrigan and Brodie Croft, Seibold declared on Wednesday "there will be a lot of pressure on the Cowboys, everyone expects them to win".

"Most of the preseason there's been a lot of pressure on him, both the club and him personally and he's probably doing his best to deflect that," the Cowboys coach said.

"But we're comfortable … we're not feeling it, if that's what he thinks."

Seibold also dropped to reporters that Cowboys players had told his men they had "slept on the field" last week, a line repeated by Broncos prop Payne Haas on Thursday.

Green wasn't keen to add detail to reports of their sleepover, except to theorise how their nocturnal activities may have leaked.

"It is a brand new stadium, nobody has played on it yet so we need to try and familiarise ourselves as much as we can with it and feel comfortable here," he said of the rationale behind the idea.

"We had Busby Marou come and play for the boys also, so that was a great experience and they played at the Broncos' season launch a couple of nights later, so it doesn't surprise me that things get out."

Green has ordered his players to simply "do their jobs" on Friday night but admits the occasion is different to most.

"There's definitely been a different feel for this game; a lot more excitement … call it the toilet paper effect because people have been missing out on tickets, where usually they'd be getting them," he said.

"It's created that excitement about the game and little bit of worry that they might not get a ticket, which hasn't been the case previously."