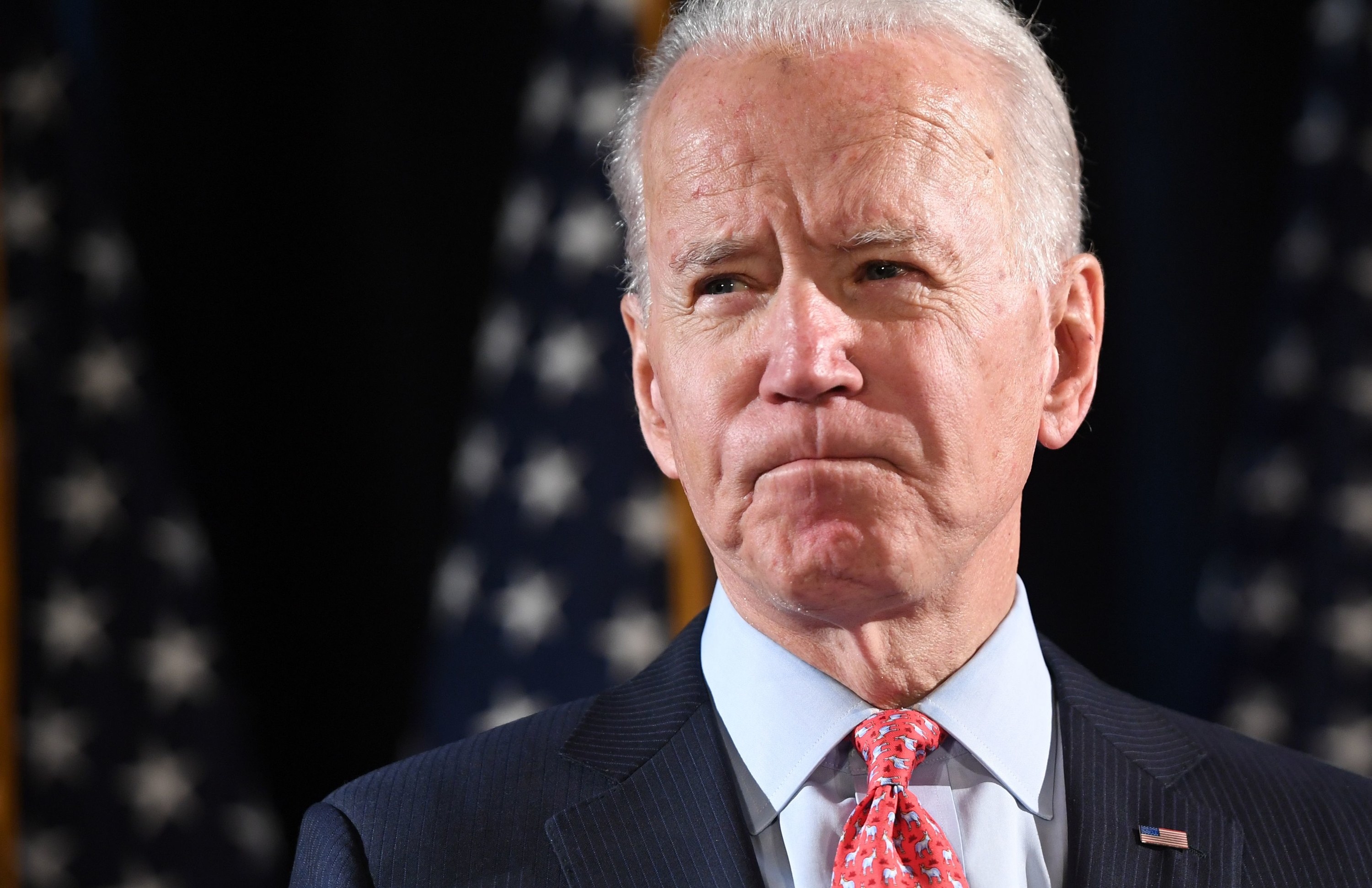 While Joe Biden has remained publicly silent about a sexual assault allegation made against him, his presidential campaign has sought to coordinate and unify Democratic messaging on the matter, advising surrogates earlier this month to say that the allegation “did not happen.”

The Biden campaign circulated talking points among top Democratic supporters shortly after the New York Times published a story earlier this month about the allegation by Tara Reade, a former staff assistant in Biden’s Senate office who says he assaulted her in 1993.

With good news and bad, talking points are standard fare on presidential campaigns. In substance, the private guidance largely hews to the sole public statement on the matter from Biden’s deputy campaign manager, Kate Bedingfield.

But the messaging shows that while Biden has stayed quiet on the allegations on the eve of his nomination, aides were taking the claims seriously enough behind the scenes to coordinate messaging among other Democrats to try to cast the matter as one that’s been thoroughly vetted and determined to be unfounded.

“Biden believes that all women have the right to be heard and to have their claims thoroughly reviewed,” the talking points read, according to a copy sent to two Democratic operatives. “In this case, a thorough review by the New York Times has led to the truth: this incident did not happen.”

“Here’s the bottom line,” they read. “Vice President Joe Biden has spent over 40 years in public life: 36 years in the Senate; 7 Senate campaigns, 2 previous presidential runs, two vice presidential campaigns, and 8 years in the White House. There has never been a complaint, allegation, hint or rumor of any impropriety or inappropriate conduct like this regarding him — ever.”

Democrats are in an increasingly precarious position as reporters assess Reade’s allegation. By any measure of the #MeToo movement that has seen the Democratic Party embrace “believe women” as a mantra, Reade, 56, has provided a serious account, disputed by Biden’s campaign and former senior staffers who worked in his office in 1993 but corroborated in part by people she told about the incident in the 1990s. This week, after Reade said her late mother had called Larry King Live about the incident, the Intercept published a transcript showing she called in to ask for advice about her daughter’s negative experience with a “prominent senator.”

Since news outlets began to investigate her claims, Biden has participated in more than a dozen television interviews and virtual fundraisers but has not addressed Reade’s allegation himself.

The guidance to top Democrats, according to a copy of the talking points sent to two people, cast Biden as a lifelong “fierce advocate for women” and the claims as unequivocally untrue, leaning heavily on the April 12 report by the New York Times outlining the allegations by Reade.

Biden’s campaign’s talking points say the Times story served as proof that Reade’s allegation “did not happen” — but the story did not conclude this, nor did it conclude that an assault definitively did happen. The Times reported that three former Senate aides, all of whom Reade said she complained to at the time, either did not remember the incident or said that it did not happen. The Times also spoke to former interns who said they did remember Reade suddenly ceasing to oversee them, aligning with Reade’s claim that she was pulled from that duty.

Reade has said that Biden digitally penetrated her in a Senate hallway and told her, “You’re nothing to me.” In multiple interviews with several outlets, Reade has said she complained to others in Biden’s office, filed a report at the time to a Senate personnel office, and said she was demoted after the incident. Reade stood by her recollections in interviews with BuzzFeed News this month.

“All four of the people Mrs. Reade says were notified of an official complaint told the New York Times on the record that they have absolutely no recollection of any such conversation,” the Biden campaign told Democrats, echoing testimonials from former staffers who have painted the claims as “so wildly out of character for Joe Biden.”

The Biden campaign also pointed to the former vice president’s lead role in crafting the Violence Against Women Act, the landmark 1994 bill that significantly increased funding for the prosecution of violent crimes against women. In a livestreamed event with Hillary Clinton on Tuesday, billed as a “Women’s Town Hall,” the Biden campaign began a Q&A session with a question from a voter about women stuck in abusive relationships, now stuck at home in the middle of the COVID-19 pandemic.

“Violence against women is a huge problem, and especially right now,” Biden said, calling domestic violence prevention “one of the leading causes of my life.”

Last year, when other women came forward to say Biden touched them in a way that was uncomfortable, Reade told the Union, a California newspaper, that while she worked for Biden, the then-senator touched her neck and shoulders. She also told the paper that Biden wanted her to serve drinks at one of his events because he liked her legs. When she refused, she said, her responsibilities were reduced.

Reade first publicly described her recollection of the 1993 assault earlier this year.

The story began to gain momentum outside the mainstream media when Reade went on the podcast of Katie Halper, a left-wing commentator, in late March, and described the more serious allegation of sexual assault. The Intercept reported in March that the #MeToo group Times Up declined to fund her allegation when she approached them earlier this year, and recently that Reade’s mother made the call to Larry King Live in 1993.

The fact that Reade’s story first gained traction in the left-wing independent media led some Biden defenders to dismiss the story as a plot by disgruntled Bernie Sanders supporters to hurt Biden. But the story has gone mainstream, being covered in outlets like the New York Times and the Washington Post, both of which gave a serious assessment of Reade’s claim.

Business Insider reporter Rich McHugh, an investigative journalist who served as producer on Ronan Farrow’s Harvey Weinstein reporting at NBC News, has identified more people who have corroborated elements of Reade’s claim. Those people include a former neighbor of Reade’s who said they discussed the assault allegation at the time and a former colleague who said Reade had told her about more general harassment.

In an interview with BuzzFeed News on Tuesday, Reade said she “would like to know what [Biden and his campaign] think about the reporting of Rich McHugh, who was formerly reporting on the Weinsten case and is a well-renowned investigative reporter. What is their comment on the Business Insider articles that did a deep-dive investigation into what I’ve asserted that resulted in multiple corroboration on the record of what I experienced of sexual harassment and sexual assault by Joe Biden?”

The two Democratic operatives who received the talking points earlier this month following the publication of the New York Times report said they had yet to receive further guidance from the Biden campaign.

Reached for comment on Tuesday night, the Biden campaign pointed to the statement issued by Bedingfield, the deputy campaign manager, dated April 13: “Vice President Biden has dedicated his public life to changing the culture and the laws around violence against women. He authored and fought for the passage and reauthorization of the landmark Violence Against Women Act. He firmly believes that women have a right to be heard — and heard respectfully. Such claims should also be diligently reviewed by an independent press. What is clear about this claim: it is untrue. This absolutely did not happen.”

In line with the guidance from Biden’s campaign, Democrats who have been asked about the story in recent weeks have pointed to the New York Times report and other stories, including in the Washington Post and Associated Press, featuring denials by the three former Senate aides: two top staffers, Dennis Toner and Ted Kaufman, as well as Biden’s executive assistant from 1982 to 2000, Marianne Baker.

“I think this case has been investigated,” Sen. Amy Klobuchar said in an MSNBC interview earlier this month, pointing to the New York Times article a few days after its publication.

Klobuchar, the Minnesota Democrat, dropped out of the presidential race to endorse Biden in March. Before the pandemic shut down campaign events, she was one of his most active supporters, holding rallies for his campaign as he sought to defeat Sanders in the primary.

“I know the vice president as a major leader on domestic abuse. I worked with him on that. And I think that, again, the viewers should read the article. It was very thorough.”

Other Democrats have defended Biden as a trusted advocate for women, particularly in a race against President Donald Trump, who has been accused of more than a dozen acts of sexual misconduct, including assault.

Sen. Kamala Harris said in a recent podcast interview that Reade “has a right to tell her story” and that she could “only speak to the Joe Biden I know. He’s been a lifelong fighter, in terms of stopping violence against women.”

“Vice President Biden has a strong record for fighting for women in his life,” said Sen. Kirsten Gillibrand, a fierce #MeToo advocate, in a radio interview earlier this month.

“We are right now at the investigation stage of the allegation.”

The talking points obtained by BuzzFeed News are printed below:

The New York Times did weeks of extensive investigative research, talking to nearly two dozen former Biden staff from the 1990s, including those who worked directly with Ms. Reade. Here is what they found: “No other allegation about sexual assault surfaced in the course of reporting, nor did any former Biden staff members corroborate any details of Ms. Reade’s allegation. The Times found no pattern of sexual misconduct by Mr. Biden.”

● All four of the people Mrs. Reade says were notified of an official complaint told the New York Times on the record that they have absolutely no recollection of any such conversation — and that they certainly would have remembered it, especially because this alleged conduct would have been so wildly out of character for Joe Biden.

● Biden has been a fierce advocate for women, authoring and fighting to pass the Violence Against Women Act and launching a campaign to end sexual assault on college campuses. He has spent his life fighting to end abuses of power against women and using his voice to advocate for women across the country and around the world.

● Here’s the bottom line: Vice President Joe Biden has spent over 40 years in public life: 36 years in the Senate; 7 Senate campaigns, 2 previous presidential runs, two vice presidential campaigns, and 8 years in the White House. There has never been a complaint, allegation, hint or rumor of any impropriety or inappropriate conduct like this regarding him – ever.

● Biden believes that all women have the right to be heard and to have their claims thoroughly reviewed. In this case, a thorough review by the New York Times has led to the truth: this incident did not happen.