A dog rescued from China’s brutal dog meat trade last summer is looking for a forever home after being nursed back to health.

Cain is one of the lucky few dogs rescued from the trade, which sees around 10 million dogs and 4 million cats killed every year in China for food.

The consumption of dogs and cats is becoming less popular in the country – largely thanks to the efforts of Chinese activists – with a 2016 poll showing that 51.7 per cent of citizens think the dog meat trade should be completely banned.

But Yulin Dog Meat Festival organisers have resisted attempts to shut  the event down.

The 10-day festival, which was started in 2010 by dog meat traders in an effort to boost their sales, sees the slaughter of around 10,000 animals. Many of them are thought to be stolen pets, as they are still wearing collars. 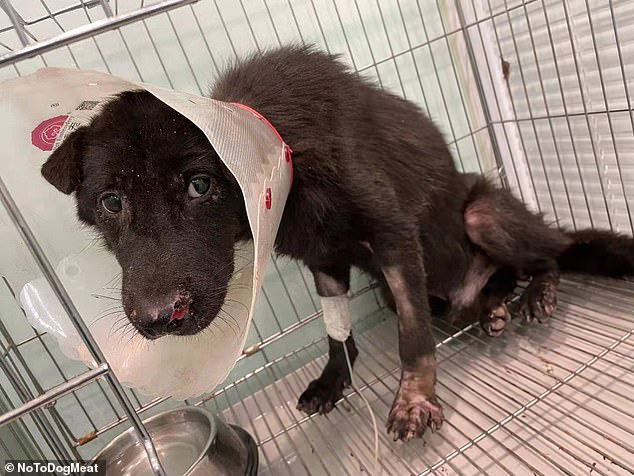 Cain was severely ill after being rescued last summer, almost dying in December. But thanks to veterinary treatment, he is now looking for a forever home 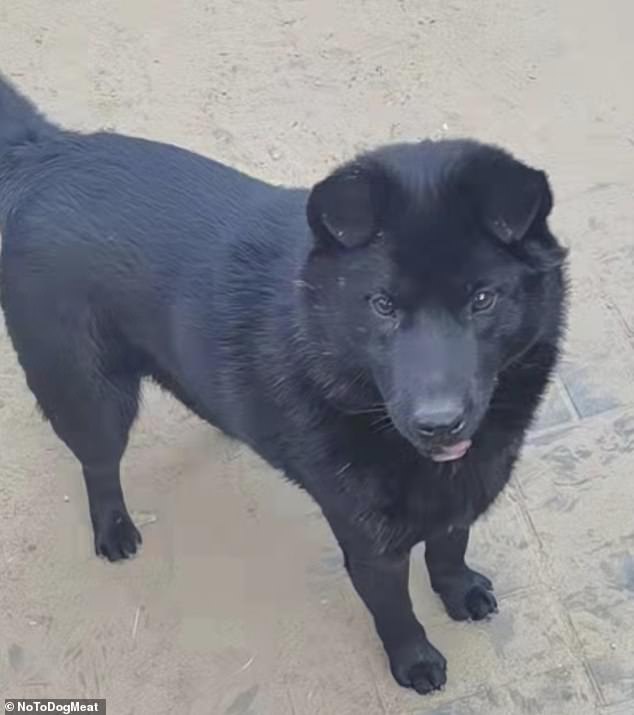 According to charity NoToDogMeat, which rescued Cain alongside twenty other dogs, the animals are ‘beaten and brutalised for fun before they are eaten’.

The charity, which has a shelter in Hebei run by Mr Zhao, was able to negotiate the release of the animals from a butcher – describing the decision of who to take and who to leave as ‘heartbreaking’.

The rescue team felt compelled to save Cain. NoToDogMeat’s CEO Julia de Cadenet said: ‘We have no idea where he came from, but from the deep sadness in his eyes, it was clear he has been suffering for a long time.

‘Mr Zhao told us how painful it was to choose who to save. The butchers were so arrogant and uncaring, and they did not care.

‘This was a backyard set up behind the Yulin dog meat markets. Outside they had a stall promoting dog meat, it was one of the few remaining places now still killing dogs just a few metres away from the stall.

‘The dogs were kept in a bare holding pen with no light, food or water and they were being dragged out one by one, killed and immediately blowtorched, the dead beside the barely living.’

According to Julia, who worked around the clock to coordinate rescue efforts, most the dogs were ‘lethargic and weak’, but a few made eye-contact with the volunteers, who had to make the difficult decision of who to rescue. 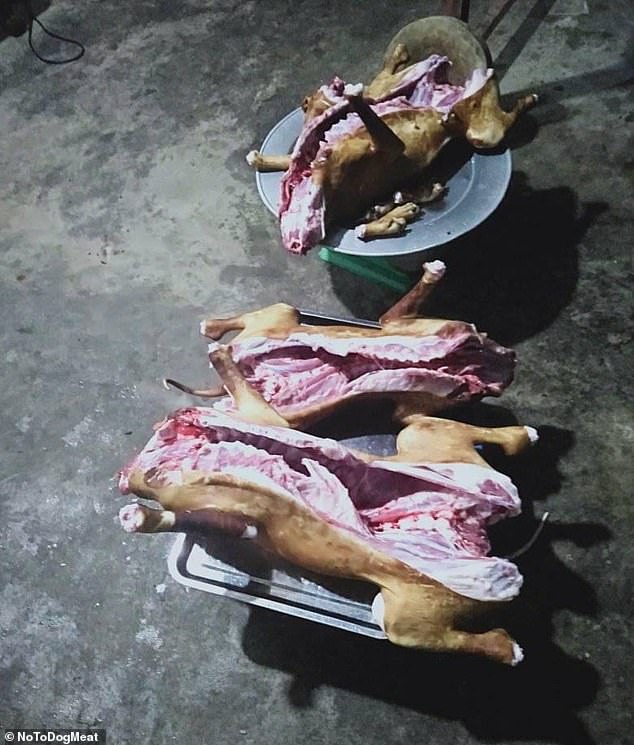 Unfortunately Cain was one of just a few lucky animals, managing to escape a certain death at the hands of butchers 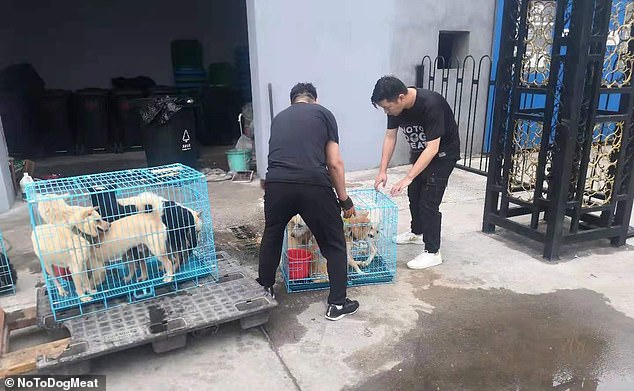 NoToDogMeat’s team in action, taking the rescued dogs, and starting on the long journey to Beijing

They chose the animals they thought would survive the journey to Beijing. The charity would later discover that all the dogs have multiple infectious, life-threatening diseases.

According to Julia: ‘Cain was so quiet the two days it took us to get to Beijing and did not cry out despite his body being full of open sores. It has been devastating to learn that over half the dogs have distemper – coronavirus variant – dog flu and parvovirus.

‘The others have terrible stomach infections, skin disease and kennel cough. We have had to divide the dogs into four clinics as the vets are reluctant to take in sick dogs from the notorious Yulin dog meat market.’ 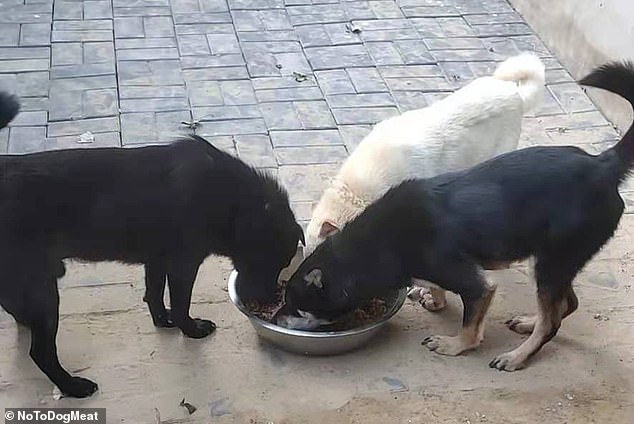 The animals looking healthier and happier after being saved from the meat trade, and nursed back to health by the charity

Cain was to face more hardship before getting better: in December, his health deteriorated, leaving him fighting for his life. But following veterinary treatment, he has recovered well, and is hoping to find a new home in 2022.

Julia is hopeful he will find a loving family. She said: ‘We are continually amazed by the fighting spirit of these wonderful animals, and they all deserve the very best care and support.’

The work of international organisations like NoToDogMeat as well as Chinese organisations and activists mean progress has been made in working towards an end to the brutal trade.

Shenzhen and Zhuhai, became the first cities in mainline China to outlaw dog and cat meat sales and consumption in April 2020.

Last month, two illegal dog slaughterhouses in a northern province of China were permanently closed down after local activists collaborated with authorities.