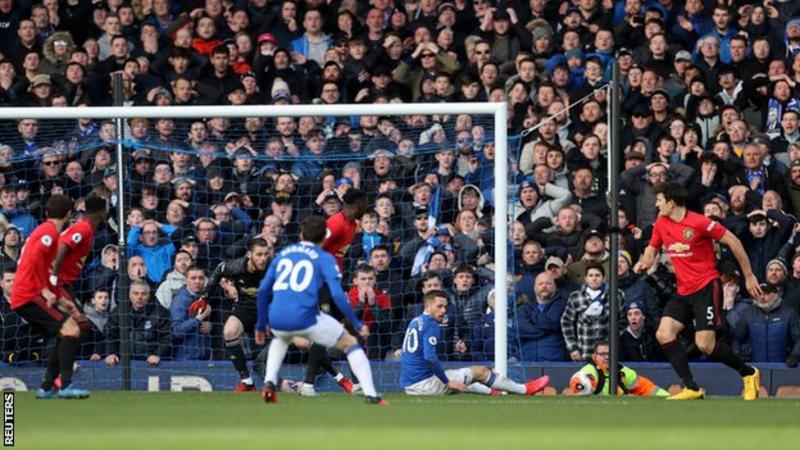 Everton had a late winner against Manchester United ruled out and had manager Carlo Ancelotti sent off in an entertaining game where both teams were undone by goalkeeping mistakes.

The hosts made a dream start thanks to a calamitous error by United’s David de Gea, whose clearance cannoned straight into Dominic Calvert-Lewin and then into the net for the striker’s 15th goal of the season.

United responded from that early setback when Nemanja Matic’s shot smacked against the Everton crossbar, and they equalised after 31 minutes when Everton’s Jordan Pickford failed to stop Bruno Fernandes’ bouncing shot from 20 yards.

Everton upped the tempo following the break in a feisty game where seven players were booked, and the hosts came close to scoring when Gylfi Sigurdsson hit the post with a dipping free-kick.

But there was late drama as both keepers redeemed themselves with fine saves, and Calvert-Lewin had a goal ruled out by the video assistant referee in added time because Sigurdsson had been lying on the ground in front of De Gea in an offside position.

That led to Ancelotti confronting the referee and being shown a red card after the final whistle, with boos ringing around Goodison Park.

The result means United extended their unbeaten run to eight games and remain fifth, while Everton’s chances of reaching the Europa League were dealt a blow following Wolves’ win at Spurs. 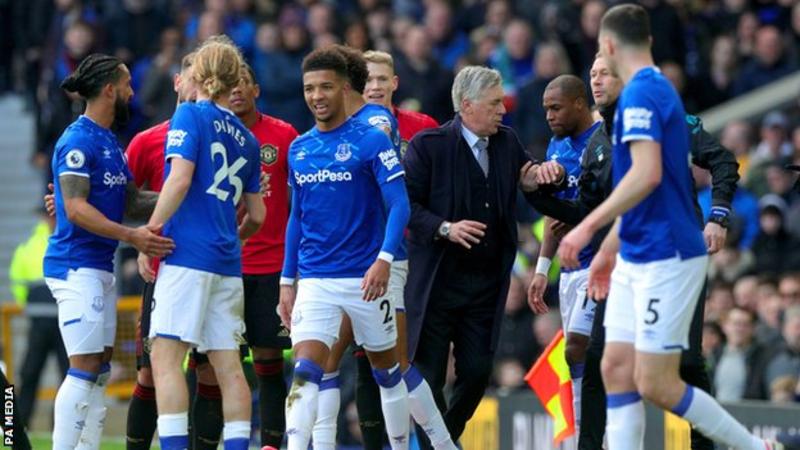 Everton have flourished since Ancelotti took charge in December, putting them in touch of a Europa League place – and they extended their unbeaten home run to seven games with this point.

But after Calvert-Lewin’s second goal was ruled out, there was a sense of injustice from the manager, the Everton players and a raucous crowd, who all thought they deserved victory.

De Gea appeared to have redeemed himself when he saved Sigurdsson’s shot in injury time, but he protested that the Everton midfielder was in his line of sight when Calvert-Lewin followed in.

Referee Chris Kavanagh initially awarded the goal, creating pandemonium inside Goodison – but the mood threatened to boil over once VAR intervened.

Despite being dismissed, Ancelotti’s passion at full-time delighted the home fans, and only cemented his bond with them.

Earlier, he had steamed onto the pitch to break up a melee after a strong Calvert-Lewin tackle on Luke Shaw led to several players squaring up to each other.

There will be disappointment about the manner of the result among Everton fans, but they had a clear demonstration that as well as possessing urbane charm, Ancelotti is willing to fight for their cause.

On a day when former striker Dixie Dean was remembered and midfielder Andre Gomes made his first start since a horrific ankle injury almost four months ago, it made it an occasion to remember. 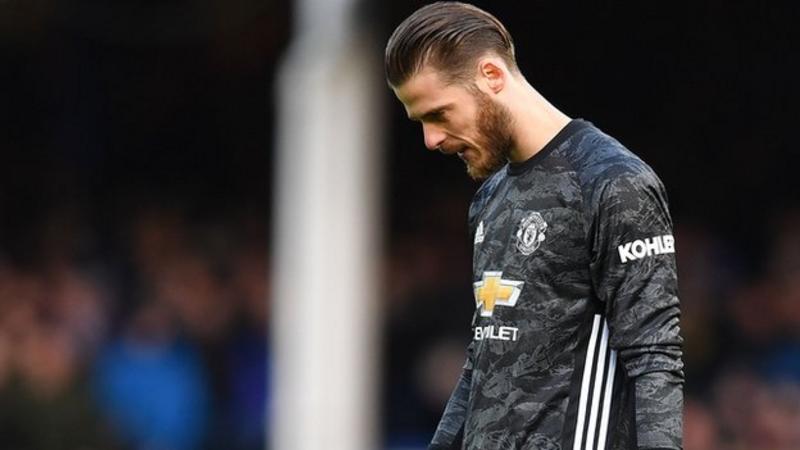 Calvert-Lewin’s goal was his eighth in 10 Premier League games, but few have been as easy or fortunate as the game’s opener after only three minutes.

De Gea had plenty of time to clear following Harry Maguire’s careful backpass, but he dithered and the Everton forward’s willingness to press from the front would have impressed the watching England manager Gareth Southgate, who will pick his squad to play Italy and Denmark later this month.

The United keeper atoned for his mistake when he saved smartly from Calvert-Lewin moments later, but it means that no player has made more errors leading to goals since the start of last season than De Gea’s seven.

Pickford then contributed to his own team’s downfall by letting Fernandes’ shot bounce under his outstretched arms.

His mistake was not in the same category as De Gea’s, but with Southgate watching on, it may lead the England boss to consider Sheffield United goalkeeper Dean Henderson for the forthcoming friendlies.

The fact he is on loan at the Blades from Manchester United may also offer Ole Gunnar Solskjaer food for thought, although the United manager insisted afterwards that he wasn’t worried by De Gea’s errors and said the Spaniard was “the best keeper in the world”.

Solskjaer will once again be delighted by the form of Fernandes, who was the visitors’ most creative outlet and scored his third goal since joining the club for £47m at the end of January. 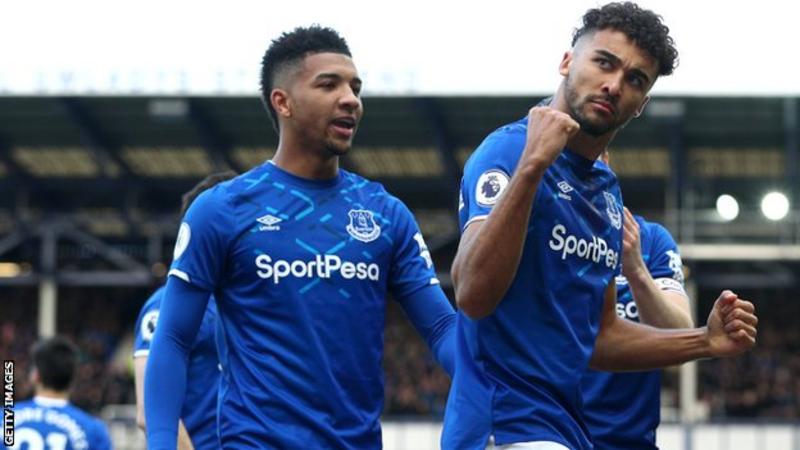 ‘Disappointed with red card’ – what they said

Carlo Ancelotti to Match of the Day on his red card: “When I saw the red card it was a disappointment. I asked for an explanation and afterwards I had a conversation with him – I want to keep that private.”

On Everton’s disallowed goal: “The decision was difficult. From our side we say Gylfi [Sigurdsson] didn’t affect the vision of the goalkeeper and they decided differently. Sometimes it is right sometimes it is wrong. But the performance gives us more confidence that we can compete with these teams.

“I don’t think [David de Gea’s view was obstructed]. His vision was clear, but the ball moved past really close to [Sigurdsson] – it’s really difficult, it is not an objective decision, it is subjective.”

Ole Gunnar Solskaer to Match of the Day on David de Gea’s error: “It’s something that happens in football once in a while if you take too long on the ball. Calvert-Lewin always chases everything and it’s unfortunate that it goes in the goal. We responded and got the goal we deserved.”

On the impact of Bruno Fernandes: “He’s a good player and we have been missing that type of player to do that for us, I’m very pleased with his contribution.”

Everton travel to Stamford Bridge to face Chelsea in the Premier League next Sunday, 8 March (14:00 GMT).

Manchester United are in action in the fifth round of the FA Cup on Thursday, 5 March (19:45 GMT), before the Manchester derby at Old Trafford against Manchester City in the Premier League on Sunday, 8 March (16:30 GMT).

Attempt missed. Richarlison (Everton) header from the centre of the box is high and wide to the left. Assisted by Leighton Baines with a cross following a corner.

GOAL OVERTURNED BY VAR: Dominic Calvert-Lewin (Everton) scores but the goal is ruled out after a VAR review.

Attempt saved. Bruno Fernandes (Manchester United) right footed shot from the centre of the box is saved in the top centre of the goal. Assisted by Juan Mata.

Attempt saved. Moise Kean (Everton) header from the centre of the box is saved in the top left corner. Assisted by Gylfi Sigurdsson.

Attempt blocked. Gylfi Sigurdsson (Everton) right footed shot from the centre of the box is blocked.

David de Gea (Manchester United) wins a free kick in the defensive half.

Fred (Manchester United) wins a free kick in the defensive half.

Attempt blocked. Tom Davies (Everton) left footed shot from the centre of the box is blocked.

(Manchester United) wins a free kick in the defensive half.