Australia's peak medical and public health associations have backed the chief medical officer advising the government on the coronavirus pandemic, saying conflicting advice from some medical commentators was contributing to public uncertainty about the response.

The Public Health Association Australia wrote to members on Wednesday asking them to reinforce the advice of Professor Brendan Murphy and his state-based colleagues amid misinformation and alternative sources claiming authority on the issue. 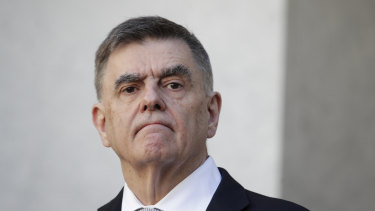 Brendan Murphy has one of the most challenging jobs anyone has filled in postwar Australia.Credit:Alex Ellinghausen

"In times of bushfires we did not second guess the advice of the chief fire and emergency services commissioner. In times of public health emergency, we should not be second guessing the chief medical officer," the email to members said.

The association's chief executive Terry Slevin told the Herald he was worried "a variety of sources" were undermining public health officials' advice to government and creating panic, arguing "there's a level of expertise and understanding" needed to give the best advice.

"Whether it's extreme versions of misinformation, people pursuing their own commercial interest, or others offering opinions based on what they heard – these kinds of things are driving the panics we're seeing," he said.

The medical and public health communities have rallied around Dr Murphy and the authorities amid criticism the official advice has been slow and badly communicated.

Veteran ABC presenter and physician Norman Swan, strategic health adviser Bill Bowtell and Medical Journal of Australia editor-in-chief Nick Talley have at times ignored the government's advice in recent weeks by calling for stronger action such as lockdowns and school closures. Chief medical officers at a state and federal level argue schools should remain open for the time being.

Tania Sorrell, director of the Marie Bashir Institute for Infectious Diseases and Biosecurity, said high-profile commentators were well-intentioned but should be careful with their comments.

"I think everybody is trying to do the right thing and trying to persuade the authorities to do what they believe is in the best interests of the country," Professor Sorrell said.

"But it's difficult if groups of individuals want to convey a different message than what is the consensus message that is being supported by various professional societies and ministries of health at state and Commonwealth level."

Dr Murphy and Mr Morrison announced stronger measures over the past two days. They have also explained why authorities have decided against more severe options at this point, such as school closures.

Mr Slevin said he was not "suggesting there aren't varying opinions" among experts. "There is legitimate debate about ways forward in the health community, but they need to be conducted in a calm and professional manner by experts," he said.

Australian Medical Association president of Tony Bartone agreed that "evidence-based information led by the Chief Medical Officer is the way to go".

"There's so much information and material that goes into their decision making, that [you can't] have a situation where you're trying to make comment on only part of it," he said. "Everyone wants to be an expert. Let the evidence and the leaders speak for themselves. We need a single source of truth. The public want leadership, information and reassurance."

Dr Swan – who is not an epidemoliogist – defended his commentary, telling the Herald the government's communication had improved this week from what he described as a terrible start.

"I’ve known Brendan Murphy for a long time, probably 20 years," he said. "It doesn't give me any pleasure to be criticising the government that he represents. But they've been all over the shop."

Dr Swan said Prime Minister Scott Morrison's initial pledge to attend a football match – in line with medical advice – was a "nadir" in the handling of the crisis. "I'm questioning the advice," he said. "I don't think you can blame the PM. I'm blaming the conflicting advice."

Professor Talley said he was trying to help. He said some commentators had been "harsh or tough", but "in a democracy that's more than reasonable".

"I have spoken out because lots of people have spoken to me, I have some expertise, and I've been concerned with all the data I've been seeing," he said. "I have no intention other than to be helpful, by reassuring people there’s lots we can do, supporting the government when they do the right things, and pushing them to do more where they can. The last thing I want is to undermine anyone's authority."