Netball players across Australia have been forced to take a 70 per cent pay cut in an effort to keep the sport running. 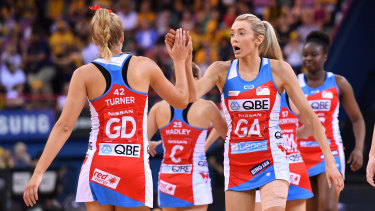 The average salary for a Super Netball player in Australia is $67,000.Credit:AAP

Super Netball chief executive Chris Symington said that while the response from players has been "amazing" the sport is concerned about how clubs will survive if the league is not able to return this year.

"It's fair to say there is a concern across all the clubs, because of the uncertainty of it, they are all at different levels of financial strength," Symington said. "So depending on how long this drags out then, they will all be affected in different ways. As a collective, everyone's concerned."

Contracted players will be forced to take two weeks leave from March 30, before moving to "active rest" for seven hours per week for the next three weeks at a 70 per cent pay cut.

The netball board is yet to decide what path will be taken after the initial five-week period, with the union and governing body working under a "worst-case scenario basis".

Netball Australia and Suncorp Super have also stood down 50 per cent of staff and reduced the hours of remaining staff and salaries of all executive staff members until 31 May 2020.

"The worst case is that we're not able to run a league this year. If that is the case then that has major implications for everyone involved," Symington said. "The approach needs to be, how do we survive?

"You've worked so hard to get these players to a semi-professional level…to have to take a backward step like this is really heartbreaking."

Earlier this week, the Super Netball League Commission announced that the start of the season would be moved from May 31 till at least June 30.

Netball NSW boss Carolyn Campbell said the player cuts were necessary to ensure the survival of the game.

"They're amazing people to take this step and it's not just our players, it is our entire staff that have taken pay cuts," Campbell said.

Across the NSW Swifts, the Giants and Netball NSW alone, staff have been either been forced to take leave, reduced their hours or have permanently lost their jobs.

Netball Australia is currently offering online netball workouts and programs tailored to the netball community in an effort to find another revenue stream.

Netball great Liz Ellis said the way the girls have handled the cuts is a testament to just how "mature" and "intelligent" the group of players are. 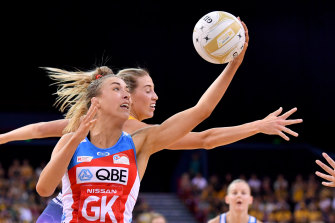 Across the NSW Swifts, the Giants and Netball NSW alone, staff have been forced to take leave, reduced their hours or in some cases, have been terminated altogether. Credit:AAP

"They understand the realities of the world at the moment," Ellis said. "I just think it probably shows the difference in the player mentality, and I'm not gonna sit here and take pot-shots at the rugby league players.

"I think my message to them would be 'do whatever it takes to see your sports survive'. You have to actually be quite selfless."

The NRL proposed an 87 per cent pay cut for its players last week to ensure the survival of the professional game.

"It's a real feeling amongst netballers that we're in a position of privilege and I think that comes from only just being newly professional," she said. "There's a sense that it has to be protected for future generations."

Ellis believes out of all the sporting codes in Australia, netball has the best chance of coming out of the coronavirus crisis alive.