Three-time surfing World Champion Mick Fanning will come out of retirement for this year’s Bells Beach surfing competition after being awarded a wildcard spot.

The 40-year-old officially retired in 2018 but also competed in the Rip Curl Narrabeen Classic in NSW last year.

Fanning has won the Bells Beach competition four times, with his first victory in 2001 and most recent being in 2015. He will be bidding for a historic fifth title – no man has won at Bells more than four times. Australian Gail Couper has the record for the most wins: 10 across 11 years in the ’60s and ’70s.

“To go and ring the Bell for the fifth time, no one has ever done it apart from Gail Couper,” said Fanning. 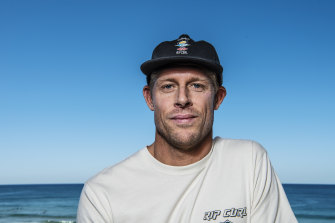 Mick Fanning is coming out of retirement for a second time to compete at Bells Beach this year.Credit:Louise Kennerley

“During my career I got close, but right now I just want to focus on putting on a good performance.”

He said the opportunity to participate in the historic surf competition near Torquay in April was particularly special.

“Bells is the wildcard I really wanted,” said Fanning.

“I love everything that comes with Bells, the history, the cliffs, the gathering of everyone down in the car park. It’s so awesome. It’s something that sits in my heart.”

The upcoming Rip Curl Pro at Bells Beach is the fourth event on the World Surf League championship tour and will start on April 10 and run across the Easter weekend to April 20.

The event will return to the Victorian coast in 2022 for the first time in two years after COVID-19 restrictions previously forced the cancellation of the event.

His previous wildcard performance at the 2021 Rip Curl Narrabeen Classic came after taking time off to recover from a knee injury.

“My preparation when I was on tour was non-stop training but this time around I’ve just been focusing on my surfing and making sure it’s up to the level of the best in the world,” he said.

Fanning also recently made headlines after rescuing residents in flooded areas in northern NSW using his jet ski, along with several other high-profile figures such as fellow surfer Joel Parkinson.

However, three-time champion Gabriel Medina has withdrawn and will be replaced by Barron Mamiya, who is equal-second in the current competition.

A local trials event on April 7 at Bells Beach will determine the remaining two wildcard spots for women and men.

News, results and expert analysis from the weekend of sport sent every Monday. Sign up for our Sport newsletter.