A federal watchdog has ended an investigation of a major union that counts senior Labor figure Bill Shorten among its former heads after finding there wasn’t enough evidence to prosecute its officials.

Australian Federal Police raided the Sydney and Melbourne offices of the Australian Workers’ Union in October 2017 over media reports the union had breached its own rules concerning donations to leftwing campaigner GetUp! and Mr Shorten’s 2007 election campaign. 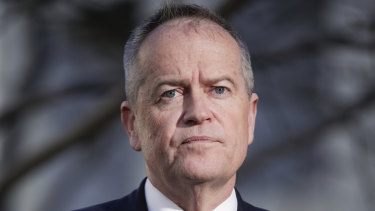 A federal watchdog has ended an investigation against the Australian Workers’ Union that embroiled its former head Bill Shorten.Credit:Alex Ellinghausen

However, the Registered Organisations Commission, which pursued the investigation, said there was “insufficient documentary evidence” of any specific conduct of the AWU’s officeholders to recommend action be taken against them.

The former Labor leader accused the government of using the cover of the Russian invasion of Ukraine to “quietly just drop everything because ‘of the absence of sufficient evidence’.”

“That says it all. An ideological smear job by a pack of gutless cowards,” Mr Shorten said, adding the five-year investigation against the union had amounted to a witch hunt.

The commission said in a statement the union admitted last year it had failed to lodge loans, grants and donation statements within the legal timeframe on nine occasions.

“In some cases … statements were not lodged until years after the statutory time periods had elapsed,” it said, adding the union failed to lodge a statement at all in 2007.

The commission said the union’s national executive did not approve any of the 20 donations investigated by the commission. But due to the union’s “deficient” record-keeping practices, the lapse of time and a lack of documentary evidence, it said it was unable to link specific allegations to individuals.

The commission accepted it wasn’t in the public interest, “absent further information coming to light”, to take further regulatory action against the AWU or any person regarding the claims.

“The donations made by the AWU at the centre of this investigation were never remotely secret, let alone concealed,” Mr Walton said, adding they were openly discussed in the union’s magazine.

Assistant Attorney-General and Industrial Relations Minister Amanda Stoker said Mr Shorten, who was head of the AWU from 2001 until August 2007, had “serious questions to answer about these findings.

“Opposition Leader Anthony Albanese also needs to show some leadership. He should be calling Mr Shorten into his office and demanding an explanation about how the funds of hardworking AWU members were spent when he was their leader,” Senator Stoker said.