First-time buyers who purchased a £155,000 flat after one 20-minute FACETIME viewing say it was a ‘gamble’ that ‘paid off’ because it is BIGGER than it looked on screen

A couple have revealed they purchased their first home amid lockdown after one virtual viewing over FaceTime – without ever having stepped foot inside the property.

First time buyers Jessica Reoch, 27, an assistant project manager and her partner Gavin Jack, 28, who works offshore for an oil and gas company, from Glasgow, got the keys to their new £155,000 two-bed flat in Glasgow four weeks ago.

But rather than having a traditional tour around the house first to check all was at it seemed in the photographs, the couple instead relied on a virtual viewing which lasted just 20 minutes.

‘We generally decided to buy because of the photos, as it looked perfect for us, and the photos online were really good quality and gave you a good feel for the property,’ Jessica explained. 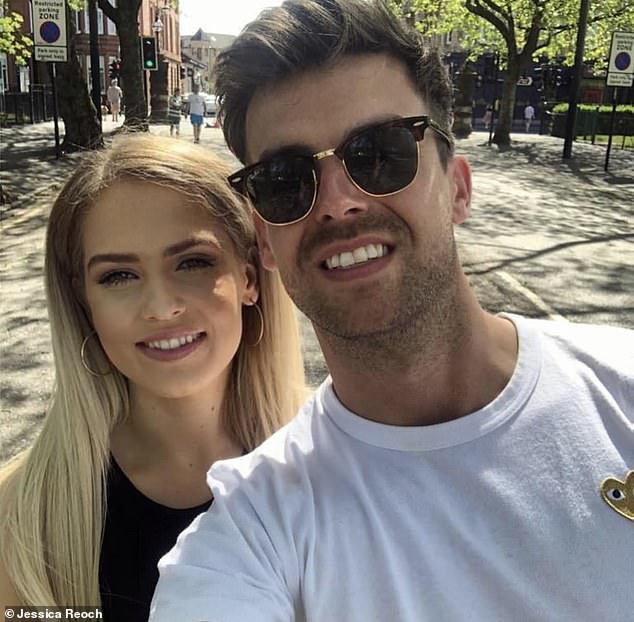 Jessica Reoch, 27, and her partner Gavin Jack (pictured, together), 28, from Glasgow, purchased their first home during lockdown after one virtual viewing – without ever stepping foot in the property

The duo walked along outside the flat (pictured, the exterior) so they could have a ‘sneaky peak’ at it before submitting an offer 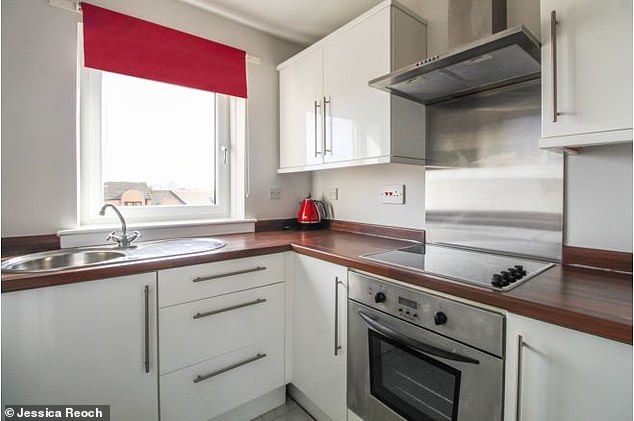 ‘We knew the area really well and we’d walked along outside and had a sneaky peak at it from there, so we felt confident we’d get what we wanted from the flat.’

‘We liked the location and street so decided to put in our offer in on the property on week two of lock down!’

‘My partner Gav is a trained joiner so we were quite confident that if anything did require fixing or repairing then he would be able to do that.’

Prior to purchasing their first home online, the couple were renting a two-bed flat in Glasgow city centre, where they had lived for three years.

But the duo were eager to get their foot on the property ladder after working hard on saving for a deposit for four years, so when the flat went onto the market, they decided it was ideal for their needs.

Despite it being lockdown and physical viewings not possible, they didn’t want to wait, and made an offer purely after conducting a virtual viewing online through Purplebricks. 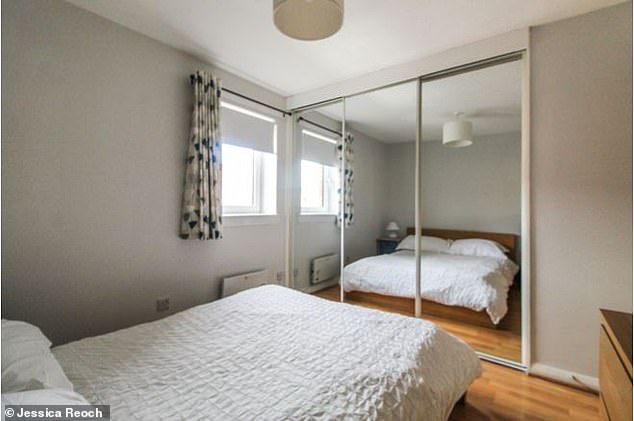 Jessica said that some of her family members had reservations on the couple purchasing the property without stepping foot inside it first. Pictured, one of the bedrooms 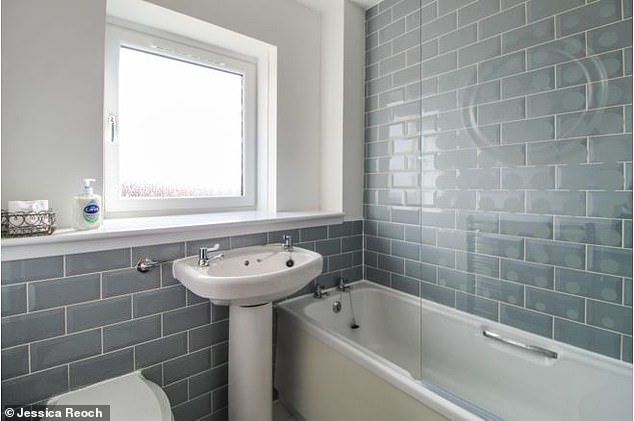 The couple said the two-bed property was exactly how they wanted it. Pictured, the stylish bathroom

‘It was so hard paying rent and trying to save at the same time,’ said Jessica. ‘We were paying rent on our previous property which was more than our mortgage is now, so we are making some good savings.

‘We were desperate to get on the property ladder so during lockdown we looked online at the property, clicked through all the pictures, did virtual viewings and decided to just go for it.’

Jessica says she liked the fact they could put in an offer online – adding it was a ‘useful tool.’

‘As we are young, we are used to doing everything online,’ she explained. ‘I liked typing out a paragraph on why we should buy the property – it was nice that we could describe ourselves in our own words to the vendor. It was like a reference for myself on why the seller should sell the property to us.’

However, Jessica says that not everyone was so confident about the couple’s bold decision – and that some of her family had reservations about them buying a property without seeing it in person first.

‘Half of our family were saying “yes, great idea, go ahead and do it”, and the other half were worried and had concerns that we might be disappointed,’ she explained. ‘We had lots of conflicting opinions but overall, we thought it was a risk that would pay off, so we just took the leap and bought it!’ 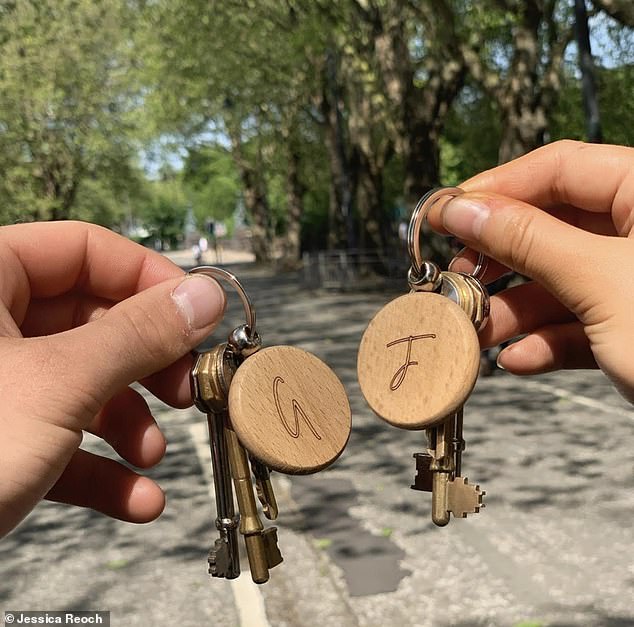 The couple got the keys to their new home (pictured), a two-bed flat in Glasgow, four weeks ago – and have since moved in 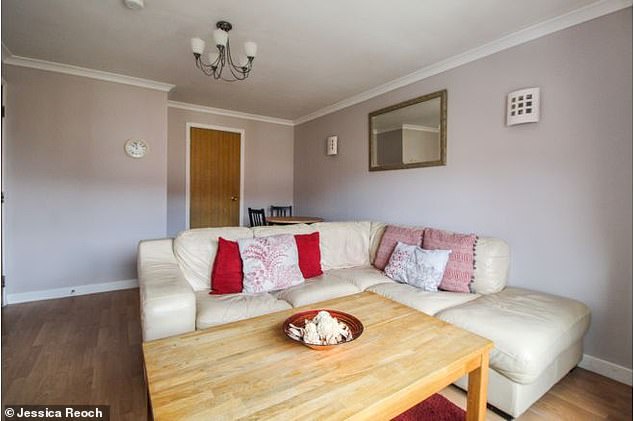 The loved-up pair were ‘desperate to get on the property ladder’ so during lockdown they looked clicked through all the pictures, did virtual viewings and decided to just ‘go for it.’ Pictured, the living room

Now, the couple have been living in the flat for a few weeks – and are delighted with their decision.

‘Although it has been a strange time with lockdown happening, we’ve really felt at home and immediately it felt like our flat,’ said Jessica. ‘Even though we viewed it online and did a virtual viewing, it is exactly how we wanted it, so we feel comfortable and settled here in only a few short weeks.’

Speaking about whether anything in the house was not quite as it appeared online, Jessica continued: ‘When we finally got the keys and entered the property for the first time, the rooms appeared larger than they had done online, so we were delighted about that.

‘Also, the rooms are even bigger than I thought from when we viewed it virtually. Overall, its even better than what our perception of the flat was online. Luckily for us – buying it ‘”blind” was a gamble that paid off.’ 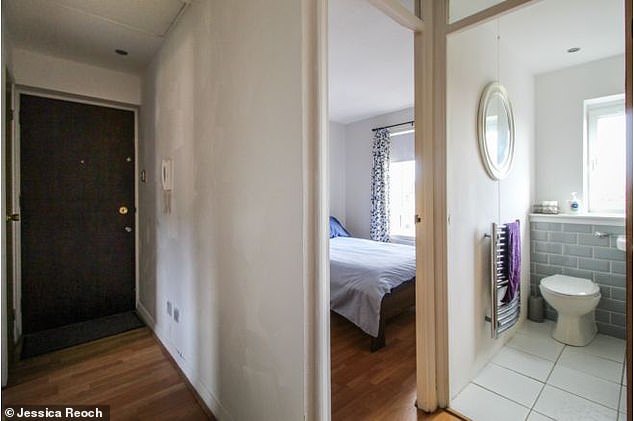 Jessica and Gavin put in an offer after one 20-minute virtual viewing which was conduced over FaceTime. Pictured, the hallway 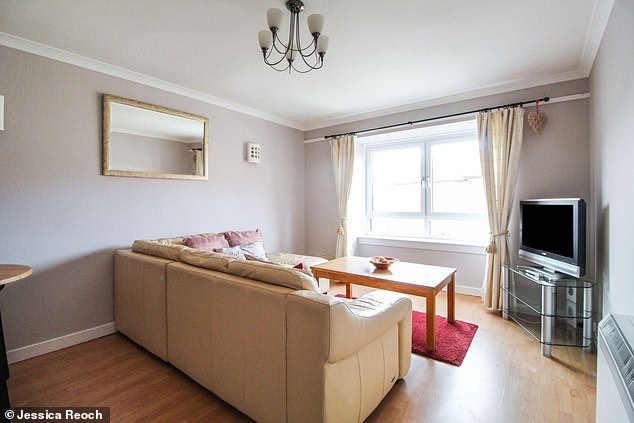 The rooms were even bigger than the couple thought from when they viewed it virtually. Pictured, the living room