First-time mum, 35, discovers her severe morning sickness is incurable LUNG CANCER – but says she ‘refuses to believe’ she won’t see her daughter grow up and get married

A first-time mum who blamed falling ill on morning sickness discovered she had incurable lung cancer after giving birth.

Joanna Heard, 35, from Haslingden, Lancashire, had extreme morning sickness throughout her pregnancy which caused her to lose two stone.

The former manager, who doesn’t smoke, assumed her sickness and recurring bacterial throat infections were due to her pregnancy.

But four months after giving birth to her daughter Freya, Joanna was still suffering symptoms and had an X-ray, which revealed multiple tumours on her lungs.

Joanna is now sharing her story to raise awareness of lung cancer and to show others that it ‘can happen to anyone’, and is not always linked to smokers. 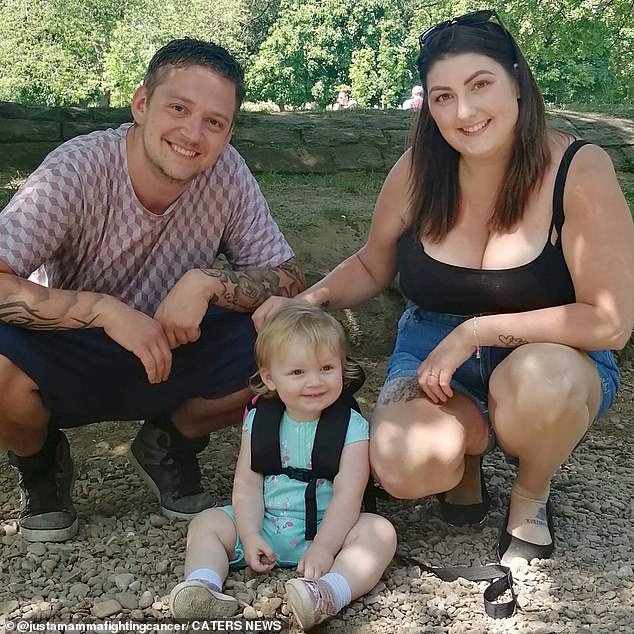 Joanna Heard, 35, from Haslingden, Lancashire, had extreme morning sickness throughout her pregnancy which caused her to lose two stone. Pictured with her fiance and daughter

The mother-of-one will receive maintenance chemotherapy for the rest of her life to manage the disease.

And she’s vowed to keep going for her daughter Freya, now 17 months,

‘I am determined to see Freya’s first day and last day at school, her university graduation and get married,’ she said.

‘I don’t know how long I have got, but I refuse to believe it isn’t a long time.

‘It is hard being ill whilst pregnant for the first time, because you don’t know what pregnancy is supposed to feel like.

‘I was sick throughout. But at three months, I kept suffering with ear and throat infections, which led to chest infections, so I began to fear something wasn’t quite right. 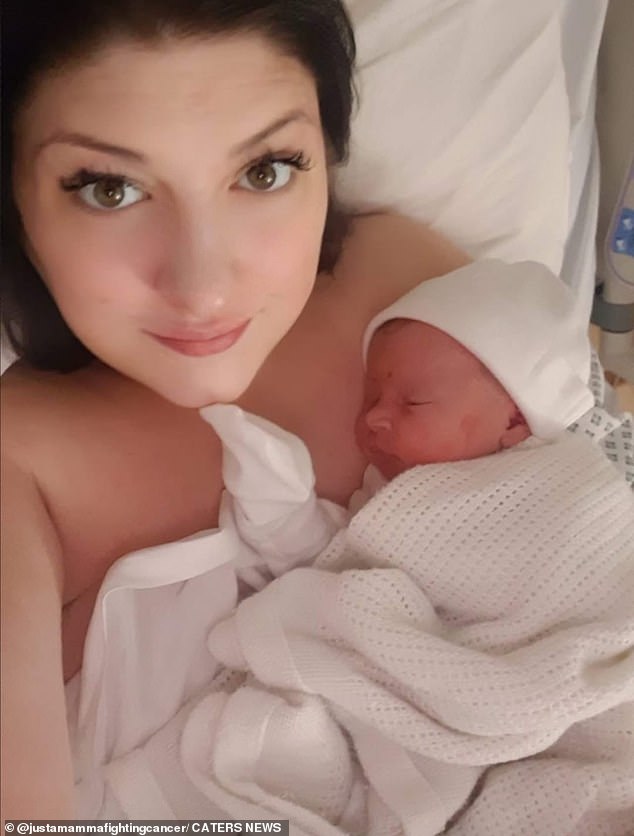 The mother-of-one will receive maintenance chemotherapy for the rest of her life to manage the disease. Pictured in hospital

‘There were times when I didn’t want to make a fuss because I didn’t want the doctor to think I am a nuisance. But I had to get antibiotics because the infections wouldn’t go away.’

When Joanna was 13 weeks pregnant, her voice has been ‘hoarse’, a common symptom of lung cancer because the tumours press on the laryngeal nerve and affect the vocal cords.

Joanna attended the doctors every month for 15 months and was first diagnosed with pneumonia when Freya was four-months-old.

But two months later, the mass had grown, and she was diagnosed with cancer. 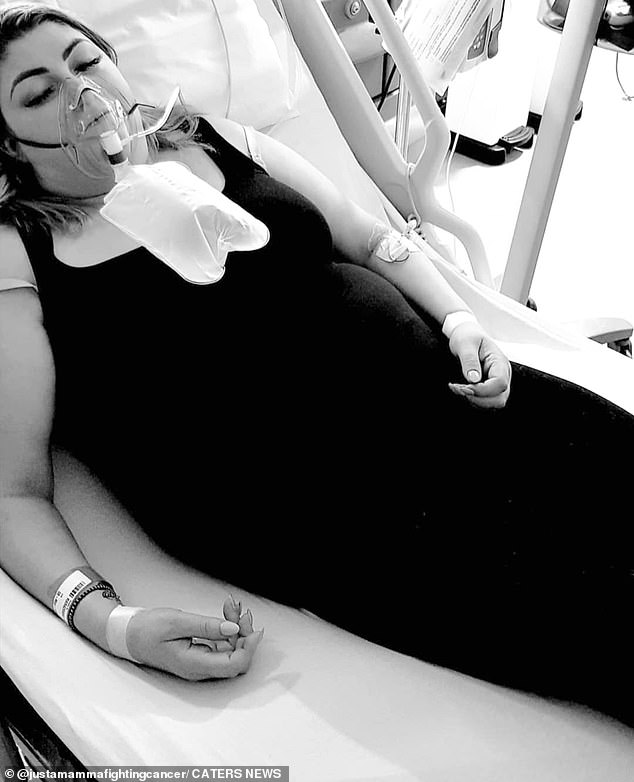 Joanna attended the doctors every month for 15 months and was first diagnosed with pneumonia when Freya was four-months-old. But two months later, the mass had grown, and she was diagnosed with cancer. She is pictured in hospital while pregnant 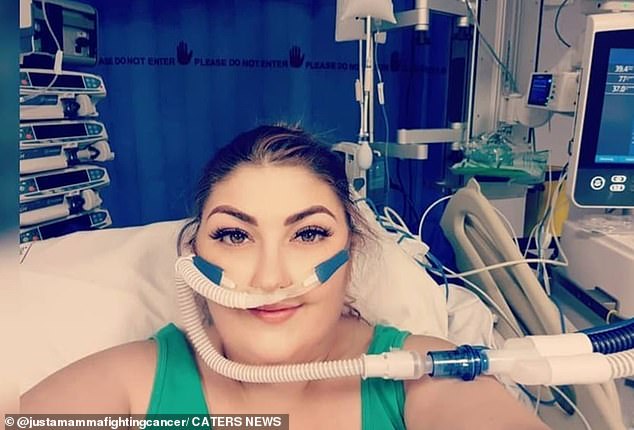 When Joanna was 13 weeks pregnant, her voice has been ‘hoarse’, a common symptom of lung cancer as the tumours press on the laryngeal nerve and affected the vocal cords. She is pictured in hospital

‘I was confused by the pneumonia diagnosis because I felt the best I had felt in months, so I assumed I had a weak strain of it.

‘Although I had symptoms of cancer such as a sore chest, hoarse voice and infections. I never thought I had it.

‘I struggle to remember what my “normal” voice sounds like.

‘It went a million miles per hour when they discovered the mass had got bigger and later established it was incurable ALK positive lung cancer, which is a genetic mutation that causes the cells to grow abnormally.’ 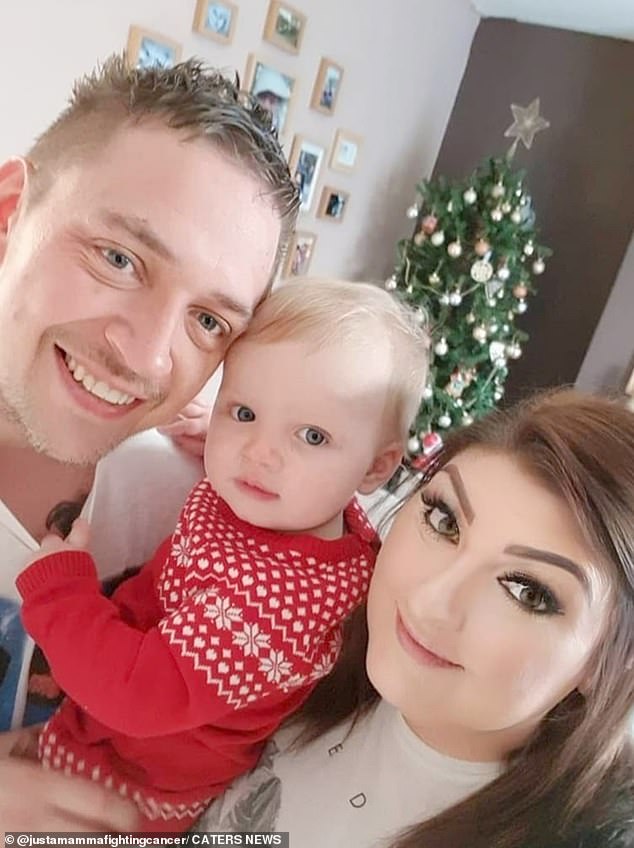 Joanna feared her life may end when she heard the words ‘incurable’ but praises the maintenance chemotherapy medication, her fiance Daniel and Freya, now 17 months, for ‘keeping her going’. They are pictured together

Joanna feared her life may end when she heard the words ‘incurable’ but praises the maintenance chemotherapy medication, her fiancé Daniel Jonathan, 30, and Freya for ‘keeping her going’.

But she admits feeling ‘naive’ because she believed lung cancer only occurs in smokers.

‘I thought it can only happen to smokers, but the statistics are so out of date. It is only now that I have realised that it can happen to anyone.

‘It is engraved into society that smoking kills and people tend to think they’ll be alright if they are non-smokers, but I am living proof that it can affect anyone. 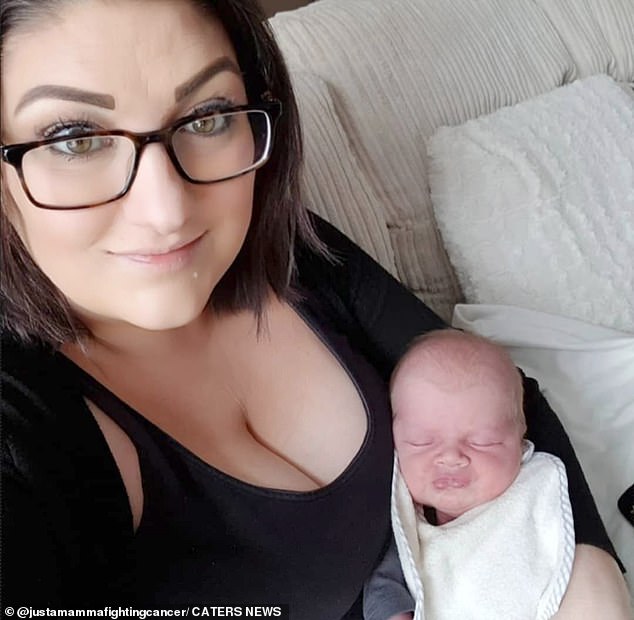 Joanna, pictured with Freya  as a new born, says Instagram has also massively helped her 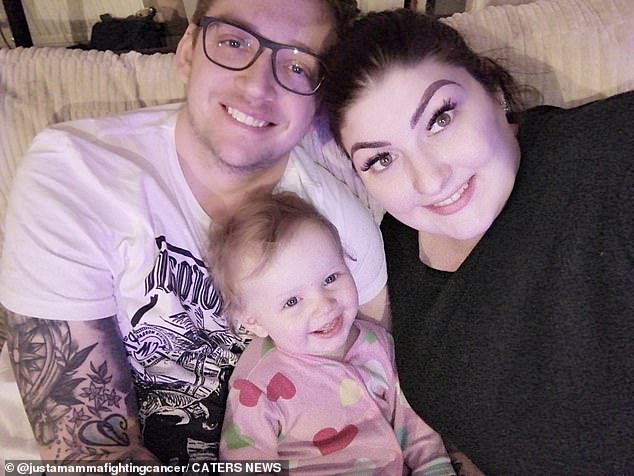 Joanna is pictured with her fiance Daniel and baby daughter Freya, who she thanks for keeping her going

‘The first thing someone asks me is “Did you smoke?”

‘But they find out but this isn’t the case – if you have lungs, then you can get lung cancer.’

‘I am so very thankful for Freya, she is my medication to keep going.

‘I don’t know what I would do without her and Daniel – they motivate me to remain positive.

‘Instagram has massively helped me as I have met many other people who have been or are going through the same thing as me which helps.’

WHAT IS LUNG CANCER?

Lung cancer is one of the most common and serious types of cancer.

Around 47,000 people are diagnosed with the condition every year in the UK.

There are usually no signs or symptoms in the early stages of lung cancer, but many people with the condition eventually develop symptoms including:

– an ache or pain when breathing or coughing

You should see a GP if you have these symptoms.

There are two main forms of primary lung cancer.

These are classified by the type of cells in which the cancer starts growing.

– Non-small-cell lung cancer. The most common form, accounting for more than 87 per cent of cases.

– The type of lung cancer you have determines which treatments are recommended.

More than four out of 10 people diagnosed with lung cancer in the UK are aged 75 and older.

Although people who have never smoked can develop lung cancer, smoking is the most common cause (accounting for about 72 per cent of cases).

This is because smoking involves regularly inhaling a number of different toxic substances.

Treatment depends on the type of mutation the cancer has, how far it’s spread and how good your general health is.

If the condition is diagnosed early and the cancerous cells are confined to a small area, surgery to remove the affected area of lung may be recommended.

If surgery is unsuitable due to your general health, radiotherapy to destroy the cancerous cells may be recommended instead.

If the cancer has spread too far for surgery or radiotherapy to be effective, chemotherapy is usually used.

There are also a number of medicines known as targeted therapies.

They target a specific change in or around the cancer cells that is helping them to grow.

Targeted therapies cannot cure lung cancer but they can slow its spread.