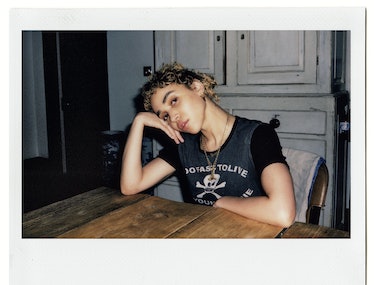 Immediately after the Mexican artist Hugo Huerta Marin finished conducting intimate interviews with the likes of Cate Blanchett, FKA Twigs, Anjelica Huston, and Carrie Mae Weems, he would grab his Polaroid camera and snap a shot of his subject. The idea was to capture creative women spanning industries, age groups, and nationalities at their most raw and vulnerable. Over the course of seven years, Marin spent time chatting with Julianne Moore, Miuccia Prada, Uma Thurman, and more about their creative processes, personal lives, providing insight into the inner workings of their minds. The result—over 400 pages of portraits alongside in-depth Q&As—has been published in Marin’s latest book, Portrait of an Artist: Conversations With Trailblazing Creative Women. Marin, who built his career documenting gender identity and creating artworks inspired by his upbringing in Mexico, got his start working with Marina Abramović, who is, of course, featured in the book, intently focused on a knitting project. The Serbian artist will also join Marin for a sit-down conversation about creativity, success, and legacy, during the global launch of Portrait of an Artist, October 28, at Fotografiska in New York.

Below, we’ve culled exclusive excerpts from the Q&As featured in Portrait of an Artist, including conversations with Diane von Furstenberg, the late Agnès Varda, and more.

“I subscribe to a more Eastern concept of beauty. Something is not beautiful unless it has a flaw in it. As a woman working in the film industry, there is always the conversation about the level of luminosity or attractiveness one has, or how sympathetic a female character is. I think all those conversations are really uncreative. I don’t want to patronize an audience and tell them how to think or feel about the character that one is creating. You can find beauty everywhere, even in moments of grief because people are so completely exposed, or in people who are incredibly stressed—you suddenly see through the facade to a rawness.”

“If you want to know about the relationship between art and fashion, it has always been a delicate point for me, because at the beginning, I wanted to keep the two things separate—even if in my mind, they were not separate at all. But I didn’t want people to think I was somehow taking advantage. I wanted to be good on my own, so I always refused to collaborate with artists when it came to my job—even if everybody does it now, and sometimes it might even sound stupid not do it. I don’t like to use people or use art to be more appealing. I still believe art is art, and even if there is a lot of marketing around it, when a great artist does something, it is done for the idea. Whatever a designer does—even if it is really beautiful—is done to be sold, so there is a huge difference. In general, I don’t like it; there is also no real reason why I don’t do it—probably because everyone else is doing it, and I want to do the opposite (laughs). I always want to be different from others, but of course, collaborations are great in theory.”

“I’ve noticed that women feel at their strongest when they are at their angriest. It is the state in which they are the least appealing to men, so I think there is an aspect of a woman feeling angry, unattractive, and kind of brutal that they quite enjoy, because it doesn’t have to do with being appealing to men, or having to follow the standards of romantic love.”

“I started my life thinking I was going to be a scientist. I thought I was going to be an archeologist or an anthropologist. The idea of digging through histories is a deep part of my life, my thinking, and my interests. Of course, the investigation of my own family is history, which is returning again in my work. In these ideas about playing within memories and associations and history—because it is memory in relationship to history, not memory for its own sake—I am interested in the exploration of what is known about the past and how that gets passed on.”

“I love books more than anything else. I never thought I would work in fashion; I always thought I would be in literature. When I was a very young girl, I asked my teacher, ‘What can you do for a living if you like books?’ And she said, ‘You could be a librarian.’ The librarian at my school had very bad breath, and that was the end of that (laughs).”

“There is a part of me that does a huge amount of preparation. I know the material really well, I do the research I need to do, but then, when I am actually on a set, it has to go away, and I have to act from a place of unconsciousness. I can’t determine what I am going to do, so I have to wait. For me, the idea is that I am prepared and know the material enough just to allow something to happen to me on camera. There are times when I am working on a film, and often, after finishing a scene, I don’t remember what I have done. I experience a sort of blackout because you just want to let it happen to you, and sometimes, when that happens, you just don’t remember.”

“I do pole dancing, and often, at the beginning, you think that the beauty is in the big tricks—the splits, the upside-downs, the spins, and all these complicated moves—but as I’ve learned more, I’ve discovered the beauty in the transitions that lead you to the big moves. The things that aren’t supposed to be beautiful. This also applies to life. For instance, you might think that the most beautiful thing in life is buying a house, but it’s not … it’s the transition to get there, the years of hard work to get there, you know? Maybe the most beautiful thing is to give birth, but actually the beauty is in what happened in those years before you get there. It’s not always in the big things in life, or the big statements in work, or the big moves in dance … Sometimes beauty can be found in the awkwardness of the transition you go through to get to that point.”

“I think vulnerability is always present and is part of humanity. No character is truly invulnerable. It’s interesting sometimes to play a character who might be deluded into believing they are invulnerable, but the whole aspect of what makes us human is that we are all vulnerable; we are all mortal, regardless of our convictions that there is some greater truth, which is being vulnerable, like a fly on a leaf.”

“Beauty can come in any number of forms and expressions, from the absolutely desperate to the grotesque to the lovely and the lucid. I like all flavors.”

“Here is some advice I always like to give: Sit still in a café and look—look at the people and look at what is happening in front of you. If you have a frame, don’t move from that frame. See what comes in and comes out. Learn from what comes into that frame like a cameraman or filmmaker. You will discover so much beauty from life just by sitting still in front of a frame.”