Even into his 90s, the writer, artist, historian, chaplain, teacher, veteran – the survivor of Japanese kamikazes – would catch the train from Ringwood into the city to join his comrades and their families.

He would march or ride in the parade then give a talk at the HMAS Australia memorial at the Shrine of Remembrance.

This year will be different. There will be no crowds to speak to on Saturday. No two-up and beers. No children on dad’s shoulder waving flags from footpaths and learning about sacrifice, gratitude and horrors of war. 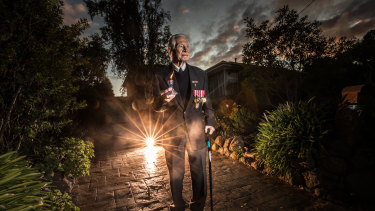 World War II veteran Desmond Shinkfield: “It was bad enough in wartime, but this is a nasty thing.”Credit:Jason South

But Australians will still remember.

This year, the 75th anniversary of the end of World War II, flames of remembrance will burn atop candles in driveways across the nation.

The ‘Driveway at Dawn’ movement, started by veterans Bill Sowry and Terry James and now swelled to more than 200,000 online members, is the nation’s grassroots virus-be-damned solution to Anzac Day lockdown.

In lieu of actual crowds, the RSL is asking Australians to observe a minute's silence with their candles or a torch from 6am, then share unique dawn services to social media with the hashtag #standto.

The official service will begin a 5.50am and be broadcast live on Channel Nine. A bugler will play the last post and Premier Daniel Andrews will read an Anzac Day message, both pre-recorded.

Live at the Shrine, Governor Linda Dessau will lay wreaths on behalf of Victorians and veterans.

Mr Shinkfield, 94, and his wife Betty, 100, will be in their driveway paying their respects, differently, but in the same spirit they always have.

"It's a very important day to me," Mr Shinkfield said. "It's important to remember those who lost their lives … and I knew so many of them." 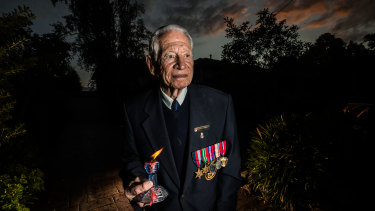 While the pandemic has halted decades of tradition, he said social restrictions were the right thing to do.

"I think what we’ve learned is that you can’t put these things aside. You have to face them," he said.

"That’s what the government has been doing and I’m glad it is doing it.

“This, you can’t fight it with guns. It’s got to be medicine to get rid of the jolly thing.

“It was bad enough in wartime, but this is a nasty thing.”

Mr Shinkfield, who joined the HMAS Australia (II) in 1944, just before the Battle of Leyte Gulf, is qualified to talk about guns, war and nasty things.

He was a midshipman on “The Aussie”, one of Australia’s most-famous warships, when it was attacked repeatedly by Japanese suicide pilots in the Philippines. 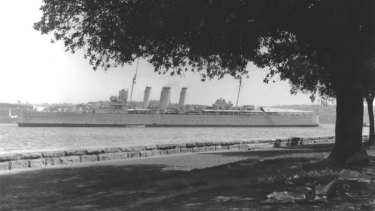 “At Leyte, the chap who was in the fore directory, he was decapitated,” Mr Shinkfield said.

“But I had one request. That was if the Japanese came strafing then I want permission not to stick my head out. He said ‘permission granted’. So I kept my head down when they came around and I’ve still got my head today, fortunately."

After the ship was repaired, Japanese kamikaze planes attacked again on January 5, 6, 8 and 9, killing a further 44.

But the head that kept down in that hell is filled with its horrors. He was eventually diagnosed with post-traumatic stress disorder in the 1980s, when the condition was still little understood.

Like the coronavirus, he said, it is a problem to faced head-on.

"It’s a psychological thing and you can’t get through it by drinking or anything like that, you’ve got to face it yourself," he said.

He has written stories and books, including the HMAS Australia: The Lucky Ship about the war and his comrades, who he said had made him a better person.

Betty has been beside him the whole way.

She first saw him in Darjeeling after the war, where they worked at a missionary language school, Betty as nurse and her future husband as a teacher. They learned Bengali together.

"I saw the back of his head the first time," she said. "I thought what a smart young man he was. He always had his hair parted and always had a clean shirt. Oh yes, very pucker."

The coronavirus restrictions has, like everyone else, kept the couple at home and away from friends and family.

But they are happy enough. Mr Shinkfield paints and Betty busies herself with making fig jam, a jar of which was kindly offered to this author. At some stage she will begin putting together the care packages she has been sending to doctors in New Guinea for too long to remember.

"You stay at home because that’s what you have to do," Mr Shinkfield said. "But I hope to take my wife out shopping on Monday. That will be a change. A big thing.”