Cocky kids: Four-year-olds are as overconfident as BANKERS when it comes to taking risks, study reveals

Cocky children as young as four have the same levels of overconfidence as city bankers and business leaders, according to a new study.

UK researchers demonstrated that high levels of confidence in one’s own abilities – a trait common among high achievers – is apparent from an extremely early age.

This suggests that cocky city types developed their ‘cognitive bias’ from infancy rather than later life, they say.

Researchers conducted a card game with young girls and boys with the objective of collecting as many stickers as possible, and compared their different strategies.

More than 70 per cent of four-year-olds and half of five and six-year-olds were overconfident in their expectations – comparable to big shot bankers and traders. 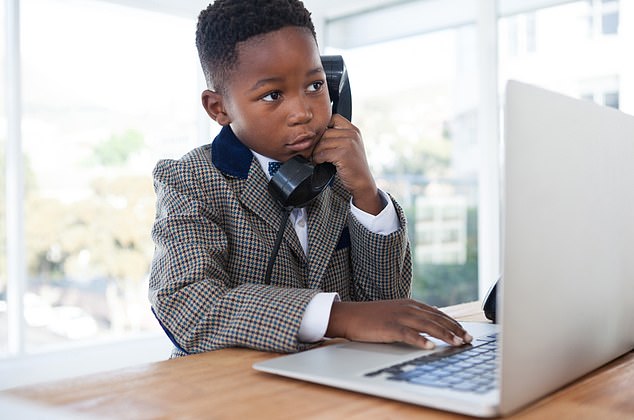 ‘Cognitive bias’ has been observed among business executives, bankers and physicians, and this study backs up the theory that it exists from just a few years old

Girls, who were ‘much more unpredictable’ than boys, were shown to be more likely to adopt a low-risk strategy and, as a result, ended up winning more.

Girls also showed greater swings between overconfidence and a lack of confidence in their abilities, they found.

‘Much of our knowledge on judgement and decision-making is based on adult participants but there is no reason to believe that humans only develop such an omnipresent cognitive illusion once we reach adulthood,’ said study author Dr Dominik Piehlmaier at the University of Sussex Business School. 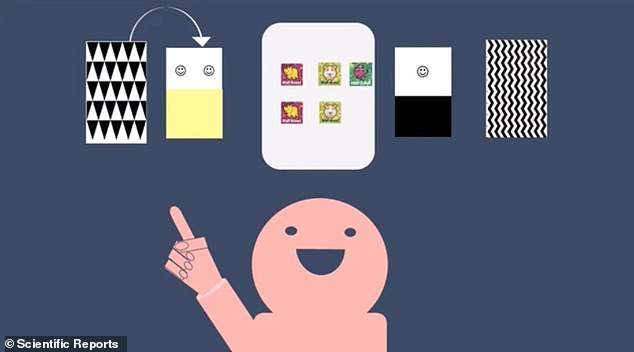 Girls and boys were asked to pick from two packs of cards on each turn – one pack had significantly higher wins and higher losses than the other pack, representative of a bigger gamble

‘A vast number of repetitions, learning, and feedback in the study did not diminish the misplaced confidence in the success of the majority of participants.

‘The finding that overconfidence is persistent even in the face of own shortcomings mirrors results from previous studies that looked at the performance of investors.’

The study involved 60 children, aged 4 years 0 months to 6 years 10 months, who played 60 turns of a card game called the Children’s Gambling Task, where the young participants chose cards from one of two packs. 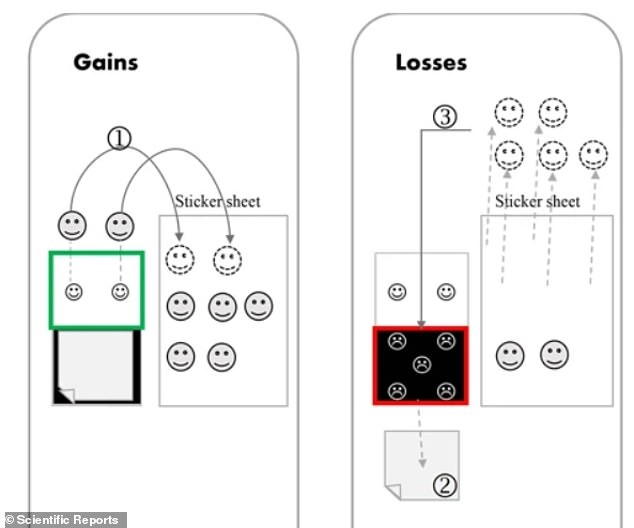 Child participants chose a card from one of two packs, one of which was more ‘high risk’. The researchers turned the card over to reveal the number of stickers the child had won – in this case two – which were added to the child’s collection. However, a post-it note was then taken off the card (right), revealing the number of stickers lost – this number was then removed from the child’s collection

Each card was turned over to reveal how many stickers each participant had won and lost.

Cards in one pack had much higher amounts to win or lose than the second pack, so children could gamble more by going for the first pack.

At intervals, children had to decide whether they thought they would win more, about the same or fewer stickers than the previous go.

This kind of overconfidence on display – seen in 70 per cent of four year olds and half of five and six year olds – is usually displayed by business leaders, physicians and bankers, said study author Dr Dominik Piehlmaier.

‘The children played more than 60 turns and saw their payoff balance rose and fell, yet every third child still thought that they could do better than they had done in the previous 50 turns,’ Dr Piehlmaier said.

On average, each participant gained 0.3 stickers per turn and left the game with an average of 6.67 stickers. 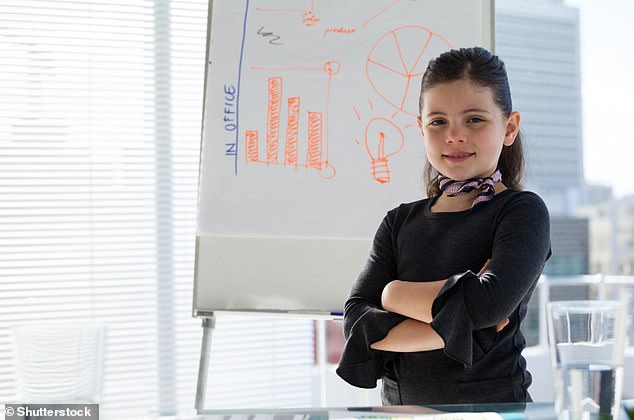 In general, girls outperformed boys by an average of 2.87 stickers thanks to a less high-risk strategy of choosing relatively safer cards, which offered smaller but more sustainable gains.

‘Boys seem to follow a negative trend line that indicates slow but steady learning on what might be considered “reasonable expectations”,’ Dr Piehlmaier said.

‘Girls’ behaviour is much more unpredictable – when the girls’ overconfidence plot is compared to payoffs, it can be noticed that they closely align.

‘This indicates that girls overestimate their abilities if they have a winning streak and underestimate themselves whenever they lose a few times in a row.

‘By the end of the experiment, there were relatively more overconfident girls than boys – a finding that contradicts previous reports regarding more calibrated girls in metamemory tasks.’

The research was published in Science Reports.

Overconfidence describes the tendency to overestimate one’s skills and underestimate the impact of risk and ambiguity on a given outcome.

The presence and influence of overconfidence on young decision-makers (4 years 0 months and older) has been consistently shown.

The majority of these studies relied on memory tasks that compared children’s predicted performance to their actual, observed outcome (e.g., performance on a picture recall task).

In all of these studies, the average participant significantly overestimated their own performance, resulting in a discrepancy between prediction and actual recall.

Additionally, there is evidence that overconfidence in early childhood and primary education slightly decreases with age.

For instance, preschoolers and kindergartners seem to be more likely to overstate their recall performance compared to third-graders.

A possible explanation for this finding is superior metacognitive abilities among older children who have a greater capacity to accurately recall and evaluate their past performance and assess their own predictions.

UWP describes the propensity to initially observe excessively confident behaviour which shifts to underconfidence after a sufficiently large number of repetitions.