Defence Minister Linda Reynolds says she is "deeply disturbed" by new allegations of war crimes committed by Australian special forces in Afghanistan, with the findings of a four-year investigation to be handed down within months.

The Inspector General of the Australian Defence Force will soon provide Defence chief Angus Campbell with its report into alleged unlawful killings and other war crimes in Afghanistan. 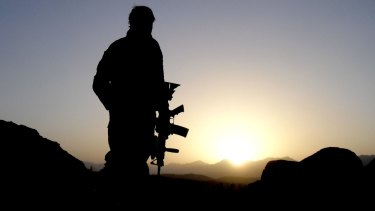 It comes as the ABC's Four Corners program aired explosive footage from a helmet camera of an Australian soldier in Afghanistan shooting an unarmed Afghan man three times in the head and chest while he crouches on the ground.

The footage shows part of a village raid in Oruzgan province in May 2012, when a man was spotted by the SAS patrol scout in a wheat field.

The soldier calls out to his superior officer three times, asking "Do you want me to drop this c—?", before shooting the man three times.

An Australian Defence Force investigation later ruled the killing was justified because it was in self-defence.

The Inspector-General of the Australian Defence Force is investigating 55 separate incidents emerging from Australian special forces' deployment to Afghanistan, involving "predominantly" allegations of unlawful killings of individuals which were not in the heat of battle.

The fresh allegations have emerged after The Age, Sydney Morning Herald and 60 Minutes last September revealed Australian special forces soldiers have confessed to murdering and brutalising detainees in Afghanistan. Colleagues familiar with the incidents say they cannot be explained by the "fog of war".

Senator Reynolds said Chief of the Defence Force Angus Campbell had advised her the Inspector-General would soon provide a report on the findings of the Afghanistan inquiry.

"I am deeply disturbed by what has been aired in tonight's Four Corners report," she said.

"I have been steadfast in my support for the IGADF inquiry which is investigating allegations about the conduct of Australia's Special Forces in Afghanistan over the period 2005 to 2016.

"Where serious allegations are raised, Australians would rightly expect they are thoroughly examined."

Opposition defence spokesman Richard Marles said it was important the report into alleged war crimes was as "transparent and timely as possible".

"Labor supports the inquiry. We cannot continue to allow there to be a cloud around this any longer.

"Whatever the outcome of the report, its timely release is the best way to protect the standing of the Australian Defence Force."