In recent years, GoPro has fended off cheaper imitations to re-establish itself as the king of action cameras. Now the company is looking to enhance its cameras for those of us with more boring lives, with the help of newly available mods.

Media Mod ($129) for GoPro Hero 8 adds just a small amount of bulk to the tiny camera, while making it a far more capable device for journalists, vloggers, and perhaps wedding videographers.

Media Mod includes a built-in shotgun microphone that favours audio input from directly in front of the camera but also captures peripheral audio around the camera. This gives the sound a great sense of location without losing a speaker's voice to their surroundings. 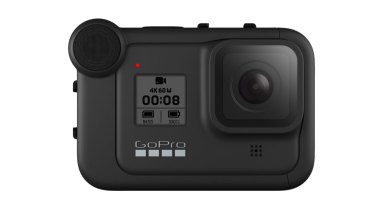 The built-in shotgun mic of Media Mod gives the sound a great sense of location.

I tested the mod in two different locations – outside on a windy day and inside a crowded, noisy market. In both spaces the microphone was able to clearly isolate my voice and cut down the background noise. My voice sounded clear if a little quieter than I was expecting, with audio matching the quality of another excellent mobile choice, the Rode VideoMicro. While I’d be confident using the mod in a crowded conference hall, I hope GoPro adds voice boost as an option to its mobile app, as its app is still the fastest way to edit video on a phone.

Alongside the tiny shotgun mic, the mod includes a mini-HDMI port for quick playback on an external monitor, and USB C for charging. This port can also be used to quickly dump video files to a computer or smartphone – handy for journalists on a tight deadline. There’s also a line in port for those wanting to connect a larger microphone or lavalier.

Also included are two standard cold shoe mounts, and GoPro has two more accessories in the works for those slots. Available now is an adorably tiny lighting add-on ($89) that would do little to light a room, but was quite effective as a personal spotlight, bringing my face out from the background of a shot. Included is a removable diffuser, which limits the power of the light but smooths out facial imperfections. Without the diffuser, the light was particularly good for backlit subjects, bringing my face out of the shadows. The light has a limited throw, but that won’t matter as most people will use it handheld from just a few centimetres away. Coming soon is Display Mod – a screen that can attach to your GoPro for front-facing video playback.

With these mods, GoPro is making a fine case for journalists and vloggers to switch to a dedicated camera and save their precious smartphone battery. The Hero 8 already has motion stabilization that is far better than most smartphones, and these new options make for a compelling pocket production unit.