You’ve got to be jockey-ing! Groom surprises his ‘horrified’ wife by choosing their HORSE as his best man and having him walk down the aisle

A groom has revealed how he secretly chose his favourite stallion to be his best man at his wedding – and explained his bride was ‘horrified’ when she saw the horse.

Paul Boyles, 47, from County Durham, was struggling to choose a best man ahead of his May wedding to Kay, 48, however ultimately decided he wanted his former racecourse King Erik to be part of the big day.

The groom secretly arranged for the 17.2 hand horse, whom they bought last year and lives in a stables, to walk down the aisle with the bridal party at the George Washington Hotel.

But despite Paul’s enthusiasm for the horse’s involvement, he confessed: ‘Kay’s look on her face was of sheer horror when she saw Erik.’ 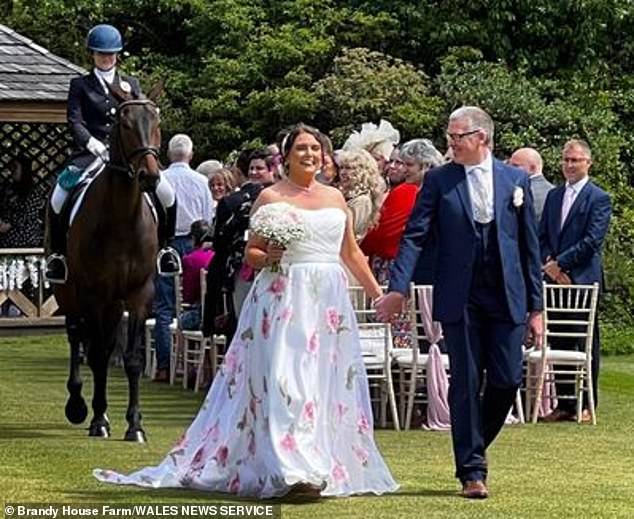 Paul Boyles, 47, tied the knot with wife Kay, 48, and arranged for his former racehorse King Erik, to surprise her and act as his best man 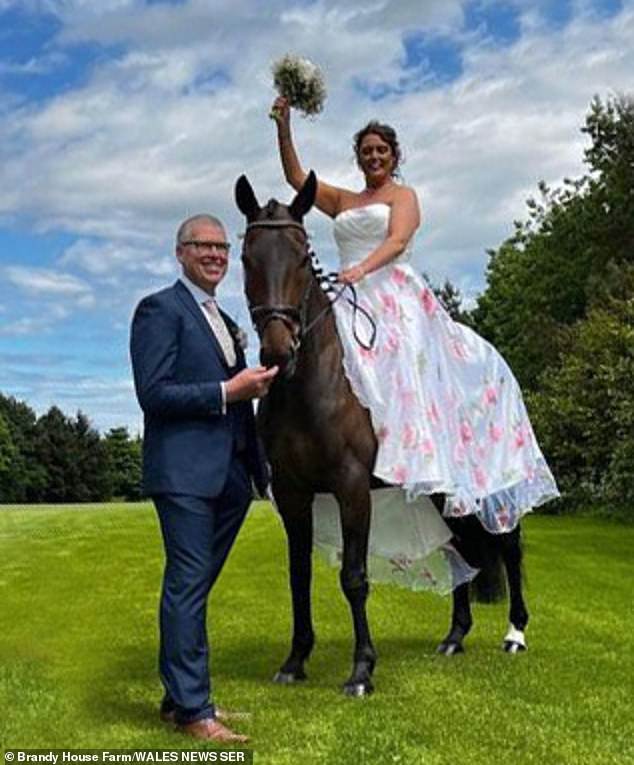 Paul, a store manager for Lidl, said he hadn’t been planning to have anyone act as his best man initially, explaining:  ‘At first I wasn’t going to have a best man.

‘At a wedding, the worst job is being the best man as you have to be funny. You don’t want to give anyone that pressure.’

He added: ‘I’ve never ridden before until July 2021, I didn’t actually get on Erik until October.

‘It got to six months before the wedding and I developed a bond with Erik and I thought I wanted him at the wedding. 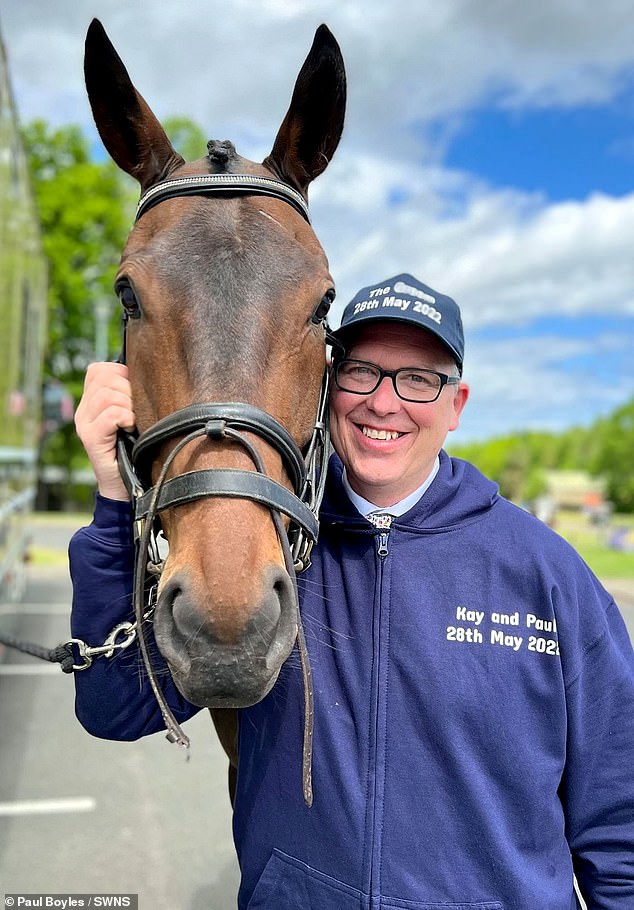 Paul even took Erik on the couple’s honeymoon which involved 11 days of horse hacking in Wales, after scrapping their original plan to go to Italy  (pictured)

‘I thought I’d keep it quiet and get my friend Steph to ride Erik down the aisle. I asked her, “will you ride my best man at the wedding?”

‘We went to the hotel with Erik, which was a bit of a secret mission and she rode around the venue.

‘She said “We’ll give a ride down the aisle a go”.

‘I then spent the next few months practicing in an indoor arena getting him used to chairs and the like while Steph got him all dressed up.’

He added: ‘I’d ordered flowers for his mane, it was a complete secret. He had the rings.’

However despite Kay’s ‘horror’ when she saw the horse, Paul confessed he was overjoyed with the outcome of the big day. 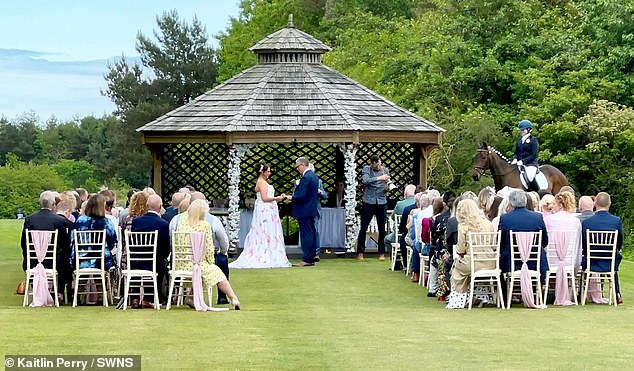 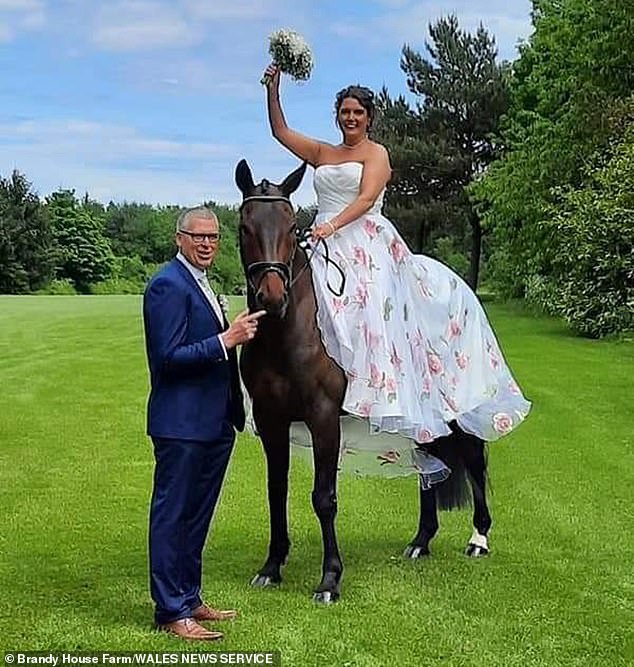 After taking photographs with the couple, Erik returned to his field and appeared on a live video feed at the reception where he made his best man’s speech

He added: ‘He was up there from 1pm, he left just 3pm and he didn’t put a foot wrong.

‘Some of the words that were used were it was like a fairy-tale, it was like a Disney movie. The Black Beauty music was playing, I love that.

‘As soon as we finished the ceremony the sun came out. It was absolutely unbelievable.

‘It was a fingers crossed sort of thing.’

In sweet images, the couple, are seen on their wedding day followed by Paul’s ‘best man’ Erik, who kept the rings in a special pouch on his saddle.

Erik returned to his field and appeared on a live video feed at the reception where he made his best man’s speech.

After their wedding, Paul and Kay took Erik with them on an 11-day horse trekking honeymoon. 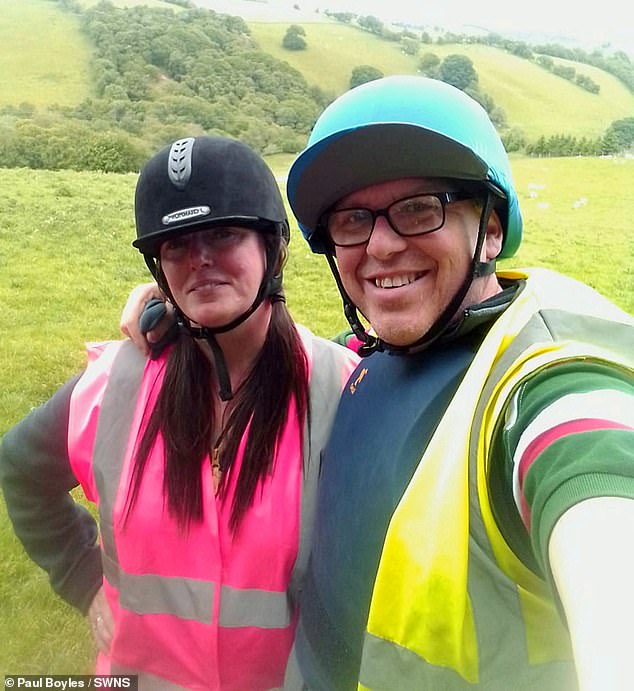 After scrapping their plans to go to Italy, they took their horse on honeymoon to Wales.

Paul added: ‘We were originally going to honeymoon in Italy but then I decided that we needed to go away with the horses so we borrowed another horse.

‘I booked a place in Wales, Kay didn’t know. We spent 11 days there hacking. It was amazing.

‘I put a picture on the back of the horsebox saying ‘Just Married’. We had people beeping and cheering.

‘It’s not every day that you take your best man on honeymoon.

‘I think the bride loves the best man more than the horse. Had she had been able to marry Erik on the day, she would’ve.’

Kay, a site manager, said: ‘We’re just happy that Erik has a wonderful life… He is one loved horse.

‘For us it’s one happy story. It was a really special wedding day.

‘Erik even walked up the aisle and brought the rings in a little treat bag on the saddle and then stood there while we finished the service.’