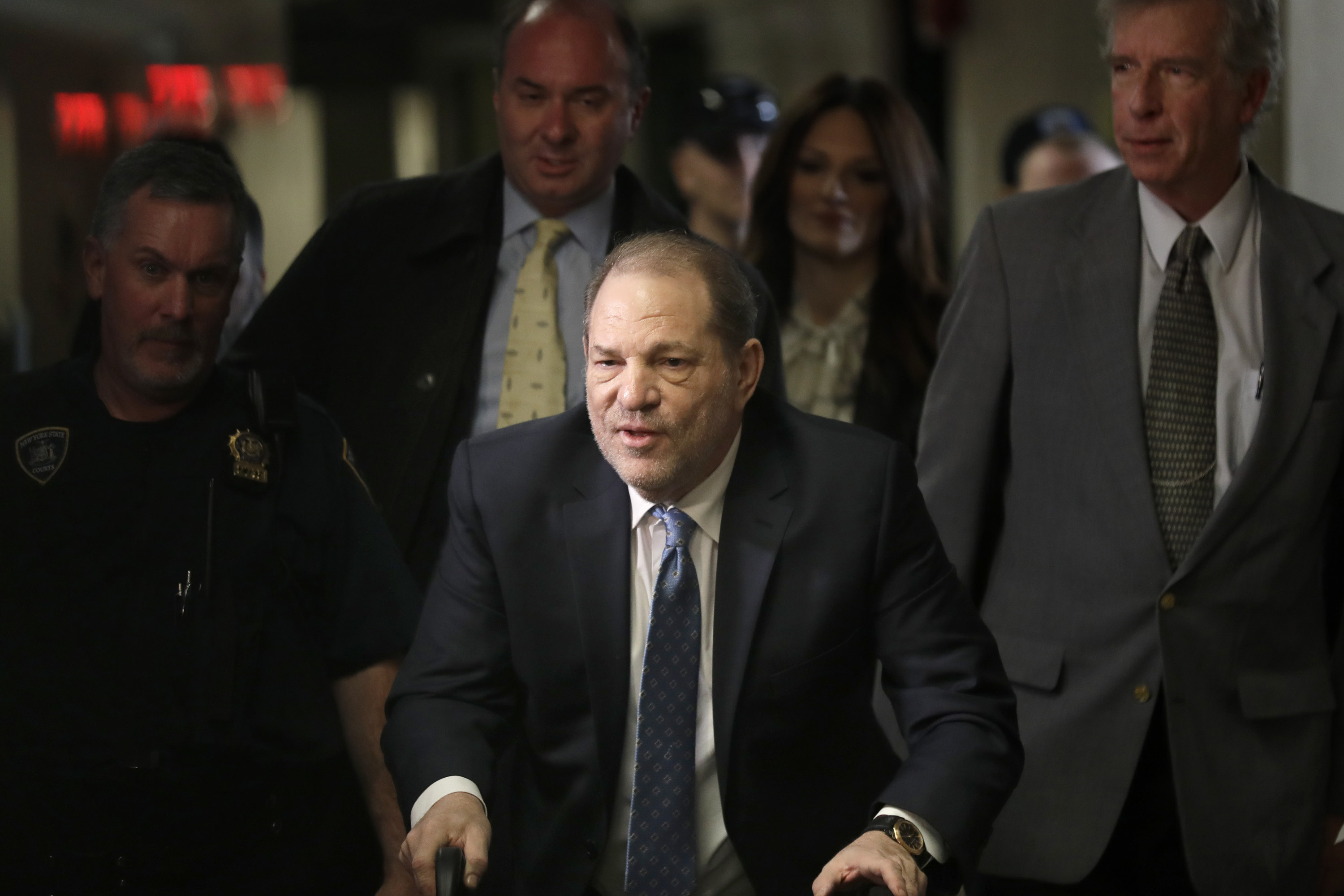 A judge sentenced Harvey Weinstein to 23 years in prison Wednesday for raping a woman and sexually assaulting another woman.

Weinstein also addressed the court, saying he was “remorseful” but then went on to talk about his charitable deeds and compared the #MeToo movement to the Red Scare.

Weinstein was facing a maximum of 29 years in prison after a jury found him guilty of first-degree criminal sex act and third-degree rape on Feb. 24. They acquitted him on the most serious charges of predatory sexual assault that carried a possible life sentence.

Weinstein will be held at Rikers Island until he is deemed ready to be transferred to the custody of the state’s corrections department after which he will be incarcerated in a state prison facility, a spokesperson for the New York State Department of Corrections told BuzzFeed News. The spokesperson did not provide the location of the facility.

Haley is a former production assistant who testified that Weinstein forcibly performed oral sex on her in 2006. Mann, a former aspiring actor, gave horrific testimony about how Weinstein raped her in 2013 during a yearslong abusive and degrading relationship.

Haley, who broke down Wednesday while talking about the impact Weinstein’s sexual assault had on her life, said he was “completely disconnected from the gravity of the crimes” he had committed against her and other women.

She asked the judge to impose a sentence that was “long enough for him to acknowledge what he has done to me and others and to be truly sorry.”

Mann talked about the “horrors” of being immobile while being raped by Weinstein. She said it takes a “special kind of evil” for someone to exploit their power to perpetrate sexual violence against an individual.

She asked the judge to give Weinstein the maximum sentence so that he had time behind bars to acknowledge his crimes.

“The impact of rape is profound,” Mann said, describing how Weinstein held an “invisible gun” to her head and used “intimidation, command, and force” to rape her.

“He abused his power over the powerless,” she said.

In a rambling speech in court, Weinstein said he was “remorseful” and that his empathy had grown over the last two and a half years.

He talked about his relationship with Mann and Haley, saying he was “totally confused” by how they described it.

“I can’t stop looking at Jessica and Mimi and hoping something maybe from our old friendship could emerge,” Weinstein said.

Weinstein also compared what was happening to him as part of the #MeToo movement to people being blacklisted for being communists during the Red Scare. He downplayed the kind of power he once held in Hollywood and bragged about his charitable donations after 9/11 and Hurricane Sandy. He also talked about his family, saying it was “hell on earth” not being able to see his children.

“My wives knew nothing about this,” Weinstein said. “I went to extraordinary length to hide my extramarital affairs.”

The four other women who testified against Weinstein during the six-week trial — Annabella Sciorra, Lauren Marie Young, Dawn Dunning, and Tarale Wulff — were also present in court along with Mann and Haley.

The six women embraced each other after Weinstein was sentenced. They walked out of the court together, some smiling and some in tears.

“We thank the court for imposing a sentence that puts sexual predators and abusive partners in all segments of society on notice,” Manhattan District Attorney Cy Vance said in a statement.

He thanked the sexual assault survivors for their statements and “indescribable courage” over the last two years.

“Harvey Weinstein deployed nothing less than an army of spies to keep them silent,” Vance said. “But they refused to be silent, and they were heard. Their words took down a predator and put him behind bars, and gave hope to survivors of sexual violence all across the world.”

Prosecutors on Tuesday had asked the judge for the maximum or near-maximum sentence for Weinstein. Lead prosecutor, Joan Illuzzi-Orbon, said Weinstein “has been using and abusing people his entire life.”

She read out the ways in which people who had worked with Weinstein or knew him well had described him in interviews as a “devil,” “a screaming bully,” “a rapist,” “a manipulator,” “a monster,” and someone with “predatory behavior” and a “very bad temper.”

Prosecutors had sent a letter to the judge last week, asking him to impose a sentence that “reflects the seriousness” of Weinstein’s offenses and his “total lack of remorse.” The letter detailed 40 years of allegations of sexual assault and abusive behavior by Weinstein.

On Monday, Weinstein’s lawyers asked the judge to give him a five-year prison sentence — the minimum mandatory punishment for first-degree criminal sex act. Their letter to the judge said Weinstein is “complicated” and that “his fall from grace has been historic, perhaps unmatched in the age of social media.” His lawyers asked for leniency, saying Weinstein’s life was “destroyed” and that he had “lost everything.”

His lead lawyer, Donna Rotunno, told the judge Tuesday that Weinstein, who will turn 68 later this month, “is a sick man” who has a “multitude of medical issues.” She talked about how the media had maligned Weinstein and that the court of public opinion had already judge him before the trial began.

Weinstein had a fall on Sunday after feeling dizzy at Rikers Island jail and believes he has a concussion, his spokesperson Juda Engelmayer, told CNN. After his conviction last month, Weinstein was ordered to be held without bail but was transferred to Bellevue Hospital due to a heart issue. He had a procedure to put a stent in his heart, Engelmayer said. Last week, he was transferred to the infirmary unit at Rikers Island.

Weinstein has “had a lot of time to think about his life and what he’s done,” Engelmayer said. “He said he wasn’t a nice guy and that’s how he got here.”

On Monday, unsealed court documents revealed Weinstein’s correspondence in 2017 after the sexual harassment allegations against him were reported by the New York Times and the New Yorker. In one such email, Weinstein responded to an inquiry from the National Enquirer about allegedly groping Jennifer Aniston by saying, “Jen Aniston should be killed,” the New York Times reported. Aniston’s representative told media outlets Monday that the Friends actor was never groped by Weinstein.

The court documents also showed that Weinstein appealed to wealthy and influential men including Michael Bloomberg, Jeff Bezos, and Tim Cook for help during his downfall.

In an unpublished statement responding to the allegations in December 2017, Weinstein described himself as a sex addict and anger addict, and said he was “suicidal.”

In an open letter published on the eve of his sentencing, Wulff said she hoped Burke would hold Weinstein accountable by “imposing a prison sentence that reflects what he has done to us and knowing that whatever sentence he renders, it will never undo what has happened.”

Wulff, a model who testified that Weinstein raped her in 2005, was not permitted under state law to give a victim impact statement during his sentencing because he was not charged based on her allegations. She said she wrote the letter to ensure her voice was heard.