Mojave Desert through the eyes of a 16-year-old: Teen photographer captures a different side to North America’s driest desert – from its abandoned cars to eerie cemeteries

The mysterious beauty of the Mojave Desert has been captured in a series of stunning, yet haunting images.

The pictures have been taken over 16 years by photographer Zach Bradley, who grew up in the 25,000-square-mile desert. He has discovered abandoned cars, empty house and eerie cemeteries while exploring the harsh environment.

The 35-year-old, who grew up in Barstow, California – which lies on Route 15 between LA and Las Vegas – but now lives in Henderson, Nevada, says that the desert often gets a ‘bad rap’ for being forlorn. 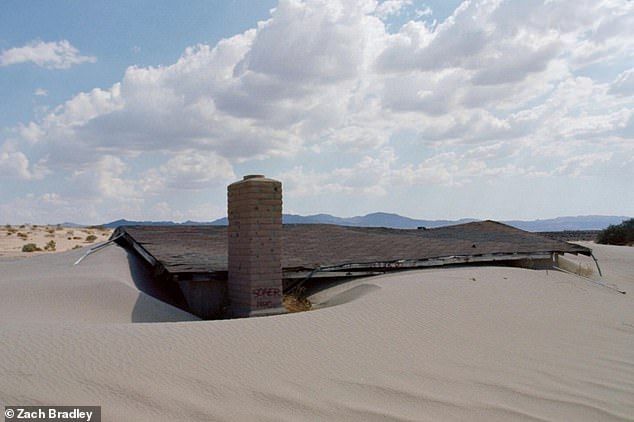 A two-storey house in Newberry Springs, California, that’s almost been buried by desert sand. It is located on Route 66 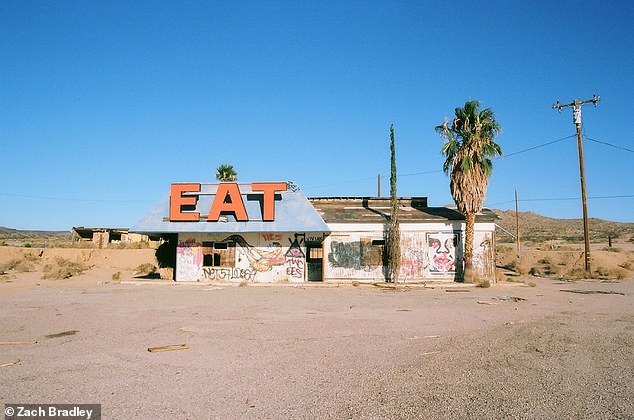 Zach Bradley’s haunting picture of an abandoned diner in Halloran Springs. The community, in California, has no official residents so is now classified as a ghost town 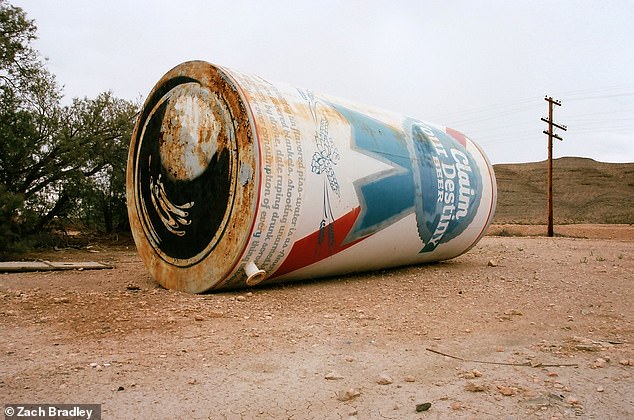 An abandoned water tank on the I-15 in Nevada, which has been transformed by graffiti artists into a beer can called ‘Claim Your Destiny Beer’ 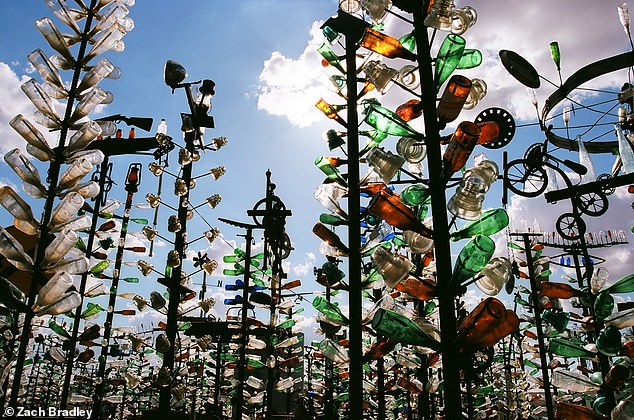 Elmer’s Bottle Tree Ranch can be found in the community of Oro Grande next to Route 66. The amazing attraction features around 200 tree sculptures made from old glass bottles 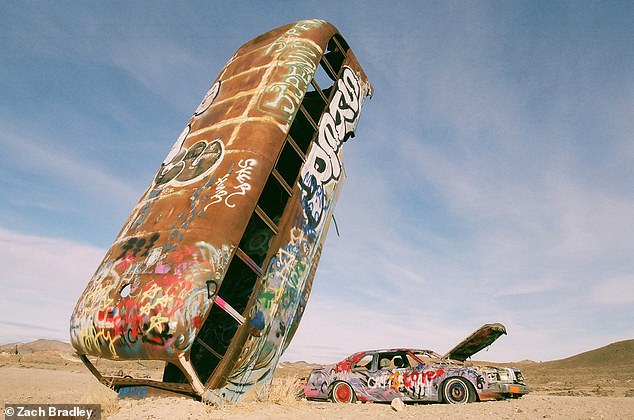 The International Car Forest of The Last Church, pictured, is located in Goldfield, Nevada. The art installation features over 40 vehicles including cars, trucks, and vans, some of which are perched in precarious positions 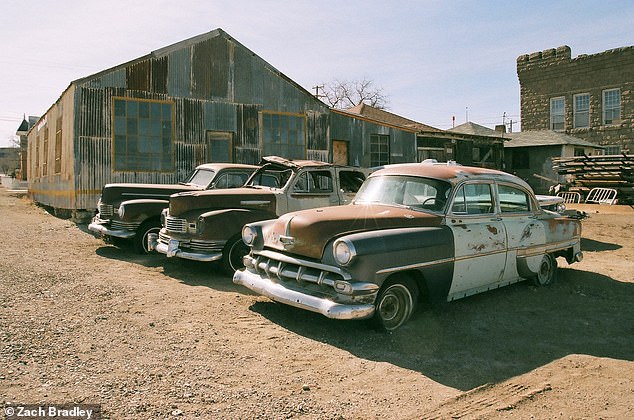 Old cars lie next to dilapidated buildings in the town of Goldfield, Nevada. Only 200 people live there

He says that in reality, it is full of ‘cool and interesting places’ and is thriving with plant life.

He told MailOnline Travel: ‘The desert is a beautiful eco-system with Joshua trees, cactus and wildflowers. You can’t beat it.

‘I love the Mojave Desert because I grew up here. As a kid, I loved going out into the desert and playing. My parents used to prospect for a hobby, so we’d always go camping. I was also in the Boy Scouts, which emphasized the importance of nature.

‘When I was about 19 I bought a Nikon N55 film camera on clearance. Since then that is the only camera I have ever shot with besides an old Polaroid camera I got at a thrift store. From there, I just started exploring the desert and shooting as much as possible.’ 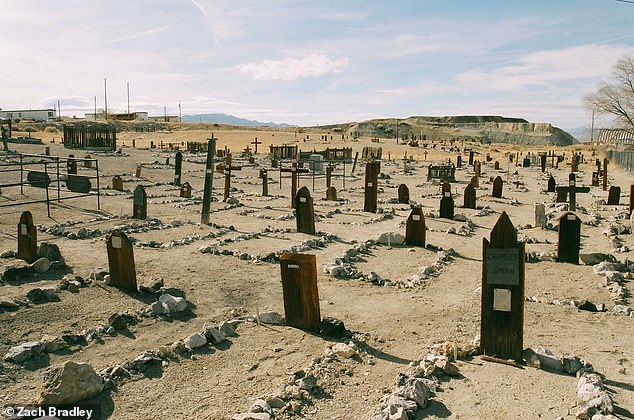 The Old Tonopah Cemetery in the small town of Tonopah, Nevada. There are around 300 graves in this cemetery, which is located next to Tonopah’s clown motel 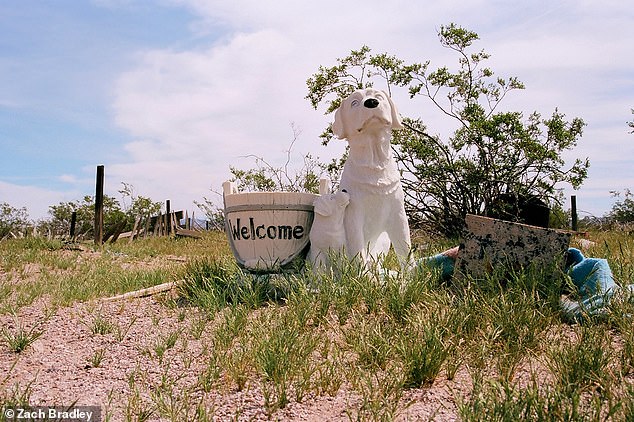 The entrance to Boulder City Pet Cemetery in Nevada. Zach says it is one of the most interesting places he has stumbled upon while exploring the Mojave Desert 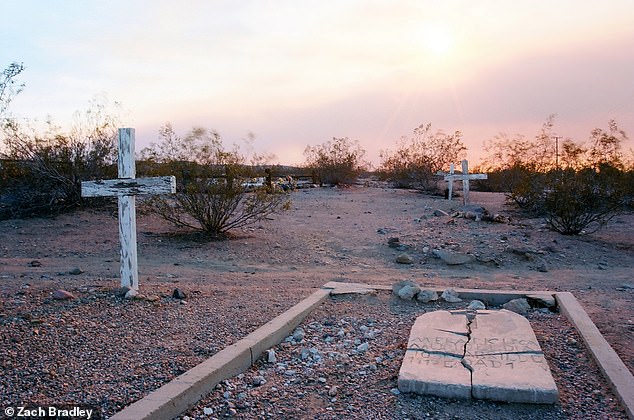 The Daggett Pioneer Cemetery, pictured, which is located on Route 66 in Daggett, California. Daggett used to be a mining town but now has a population of just 200 people 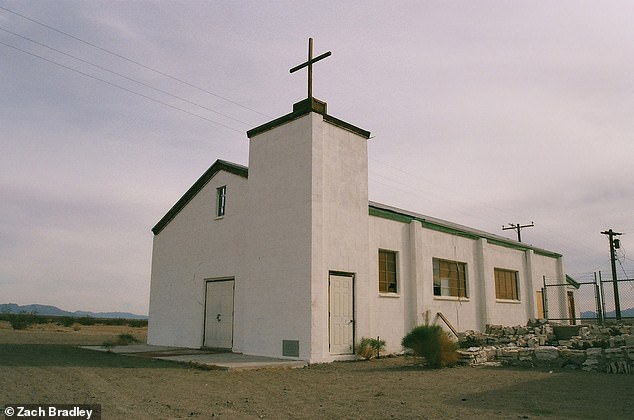 An abandoned church in the town of Amboy on Route 66 in California. Amboy was once a popular stop on Route 66 for travellers and was used as a filming location for the music video for Enrique Iglesias’ song Hero 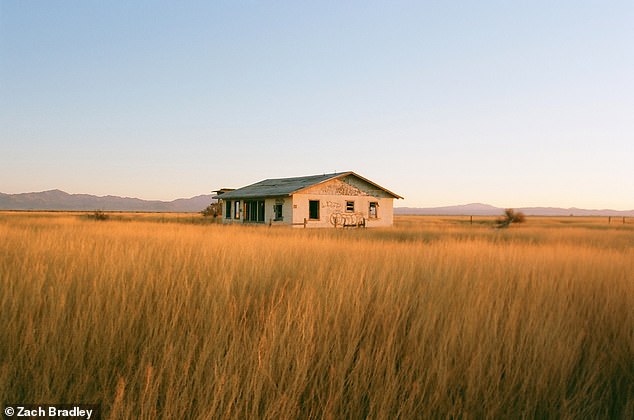 Zach says that his favourite image is this snap he took of a lone house in the Lucerne Valley, California. He said: ‘I waited for about a half-hour for the sun to come up to get that first light hitting it’ 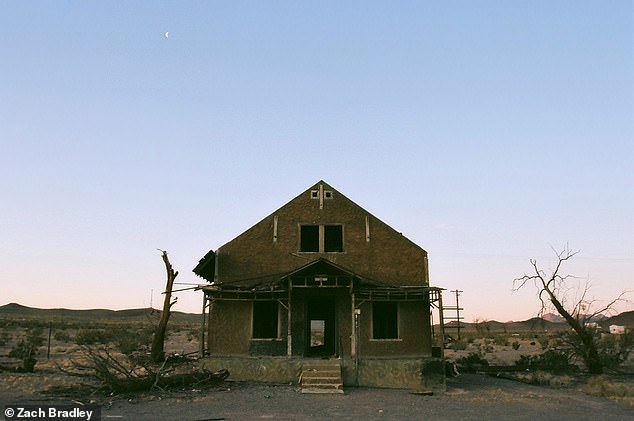 An abandoned house left to rot in the baking sun in Ludlow, California. The town has a population of just 10 people

And the most intriguing place he’s discovered on his desert travels? A pet cemetery.

He explained: ‘The Boulder City Pet Cemetery, also called the Eldorado Valley Pet Cemetery, might be one of the coolest and most interesting places I’ve stumbled across.

‘It is a rogue pet cemetery with very little information regarding its founding, but the place is heartbreaking and beautiful. 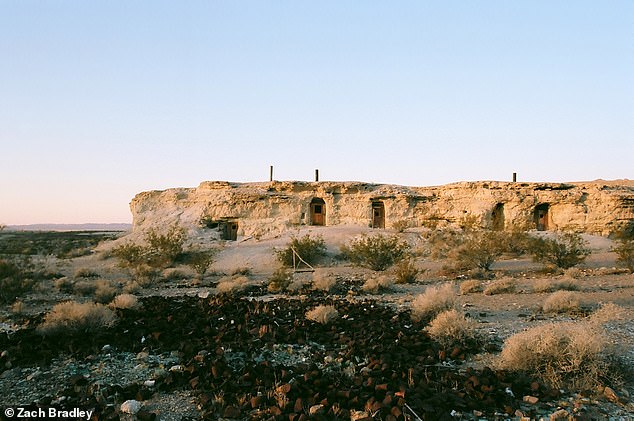 Dublin Gulch, pictured, is a collection of miners’ homes that were carved out of stone in Shoshone, California. The dwellings have been largely abandoned since the 1970s but are popular with tourists 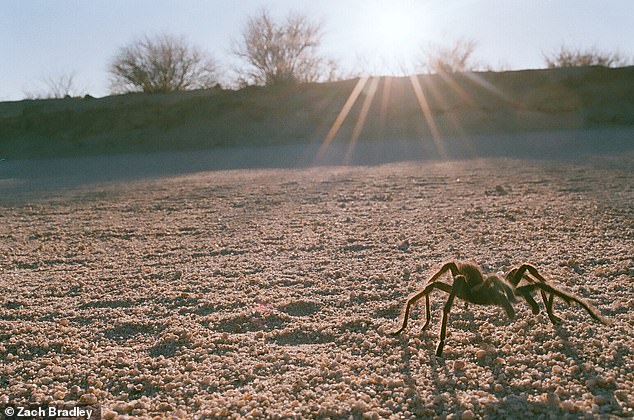 Zach captured this close-up image of a desert tarantula in the Californian part of the Mojave Desert. These creatures are venomous but only bite under extreme provocation 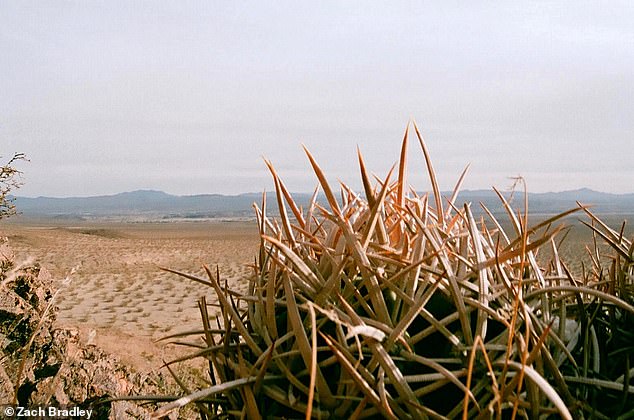 A view across the desert taken in Barstow, where Zach grew up. It was founded in 1880 during a silver-mining rush and sits on Route 15 between LA and Las Vegas 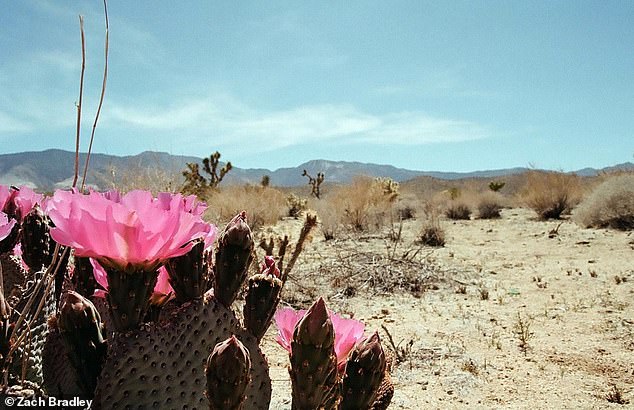 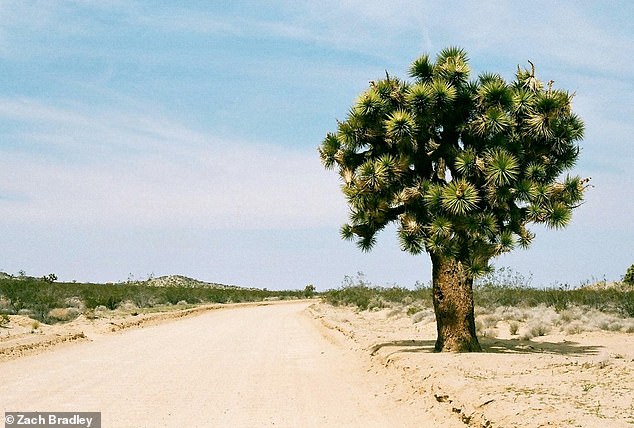 Zach captured this snap on the dry dusty road to Rainbow Basin, a rock formation in California laden with fossils 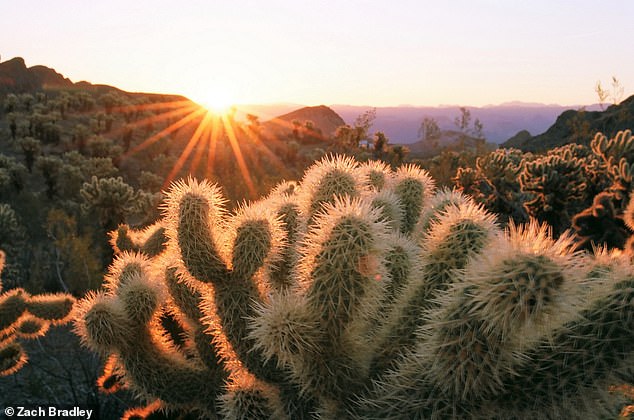 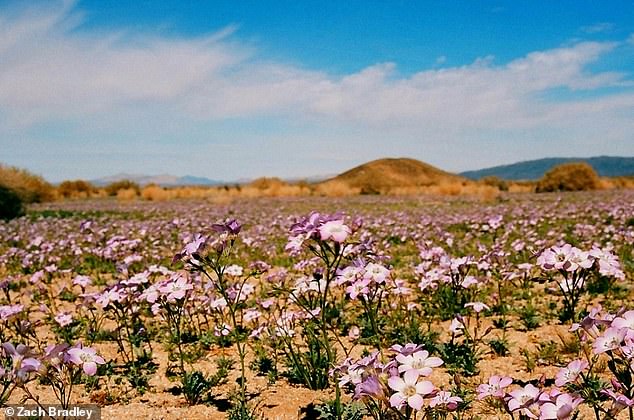 Flowers in full bloom in Hinkley, California. Zach says: ‘The desert is a beautiful eco-system with Joshua trees, cactus and wildflowers. You can’t beat it’ 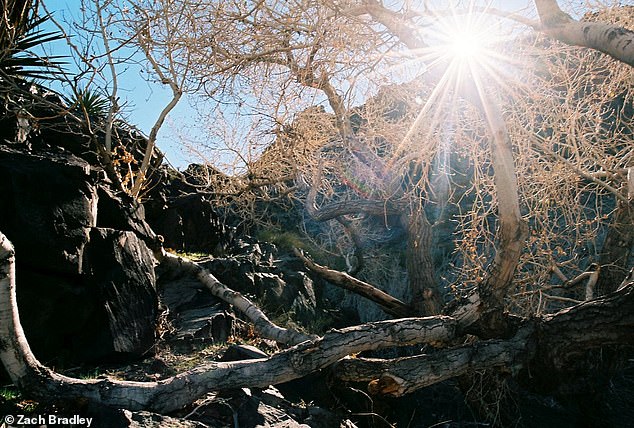 Zach shot this image in the Ord Mountains, a 14-mile mountain range in California. The highest peak is Ord Mountain, which stands at 6,309ft

‘Also there are many art exhibits that are just kind of placed in the desert like The International Car Forest in Goldfield or The Claim Your Destiny Beer Water tower. They are always cool to find when exploring.

‘My personal favourite photo I have taken is the one in the Lucerne Valley of a house in a field of tall yellow grass.

‘I waited for about a half-hour for the sun to come up to get that first light hitting it. It was pretty cold because it was late October.’ 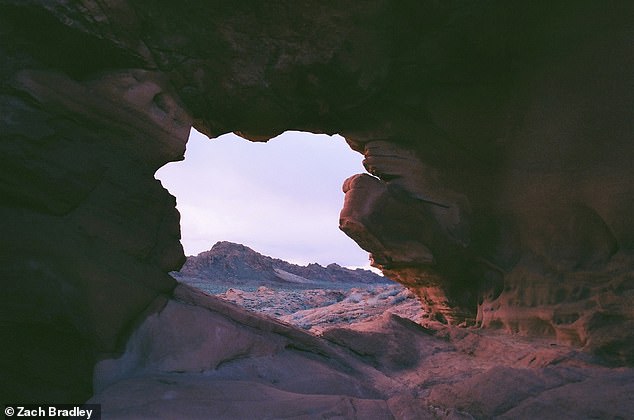 The Valley of Fire State Park in Nevada, pictured, which is known for its bright red rocky outcrops. It is popular with hikers 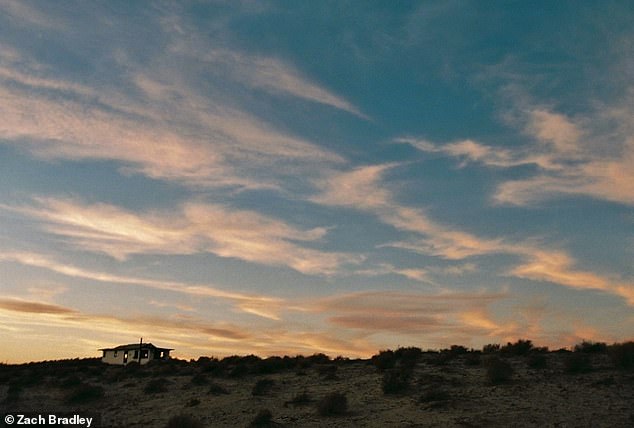 Zach said: ‘I love the Mojave Desert because I grew up here. As a kid, I loved going out into the desert and playing.’ Above is a picture he took of a lone house in Grandview, California 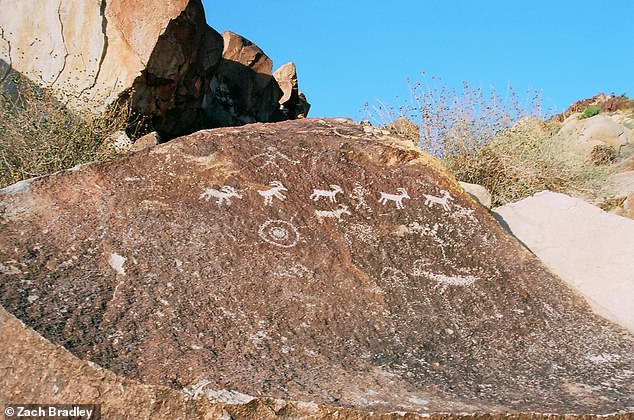 Zach discovered these intricate petroglyphs carved into a stone in Grapevine Canyon, Nevada, which is close to the Colorado River 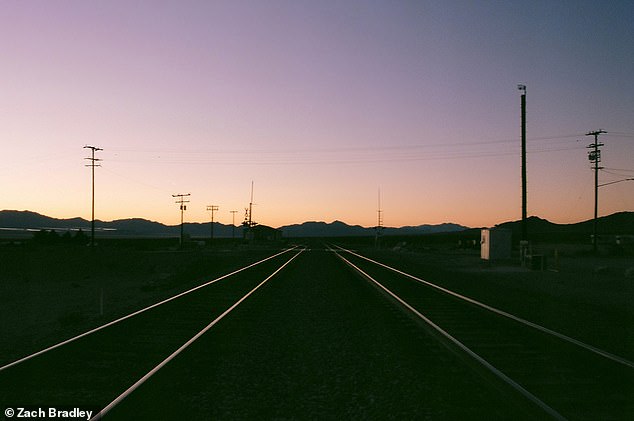 The sun sets over Nipton, a historical mining town in California. The town is on the edge of the Mojave National Preserve

‘There is a safety aspect to exploring the Mojave.

‘Not only should you bring plenty of water but you also need to watch for snakes and be aware of your surroundings – there are open mine shafts and dilapidated buildings that might not be safe to enter.’