A headteacher dubbed ‘Britain’s toughest’ has offered homeschooling parents her expert – if not a little unconventional – tips for getting children to knuckle down during lock-down.

Katharine Birbalsingh, headteacher and founder of the Michaela Community School in Wembley, which is known for achieving high academic results with its non-compromising approach to discipline, shared her advice on Twitter – and suggested that making kids wear a school uniform for home lessons might help them engage.

She told her 48,000 followers on the social media platform that wearing uniform helped pupils to make the ‘mental switch’ they needed to get into a work frame of mind.

The head also encouraged people to create large, clearly-visible schedules that families should pin to their walls and stick to, saying they acted as a ‘massive contract’, which saw everyone held to account. 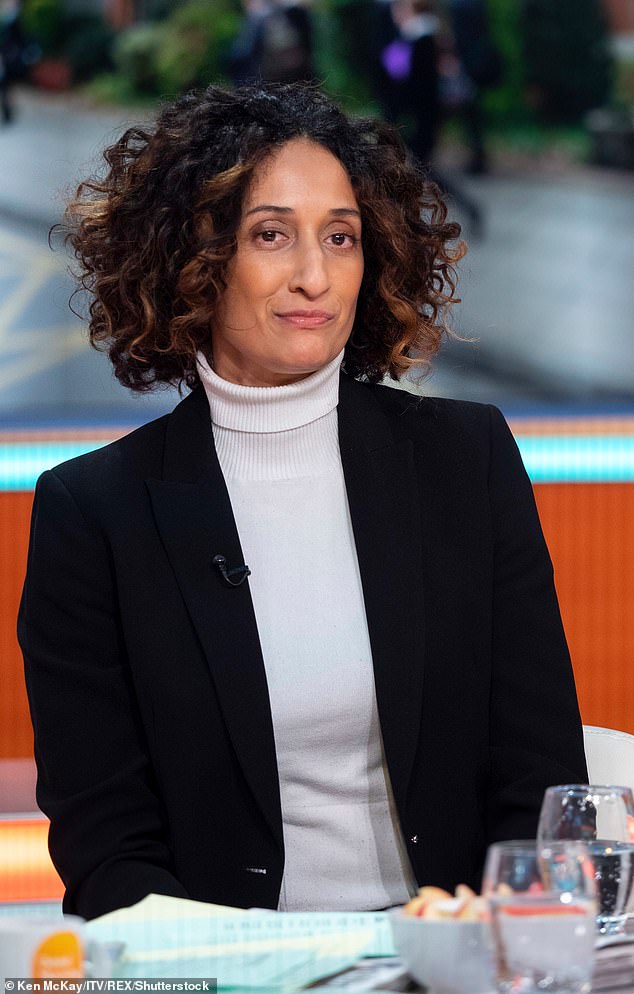 Katharine Birbalsingh (pictured on Good Morning Britain in February), is headteacher and founder of the Michaela Community School; she’s been sharing her top tips for getting children to engage with homeschooling, suggesting asking them to wear school uniform could be helpful 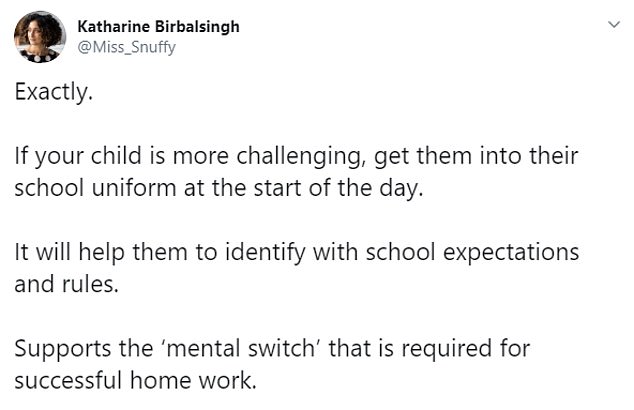 On Wednesday last week, PM Boris Johnson announced that all schools in England would close except to the children of key workers, in a bid to halt the spread of coronavirus, which has claimed more than 420 lives in the UK to date.

Birbalsingh, 47, wrote: ‘If your child is more challenging, get them into their school uniform at the start of the day. It will help them to identify with school expectations and rules. Supports the ‘mental switch’ that is required for successful home work.’

Earlier, the headteacher had imparted tips for helping pupils to listen to their parents-turned-teacher and actually get an education of sorts while schools are closed.

She advised that children should be woken and put to bed at the same time every day and that they should adhere to a ‘schedule written out in large writing on the wall where you can tick activities off when completed’. 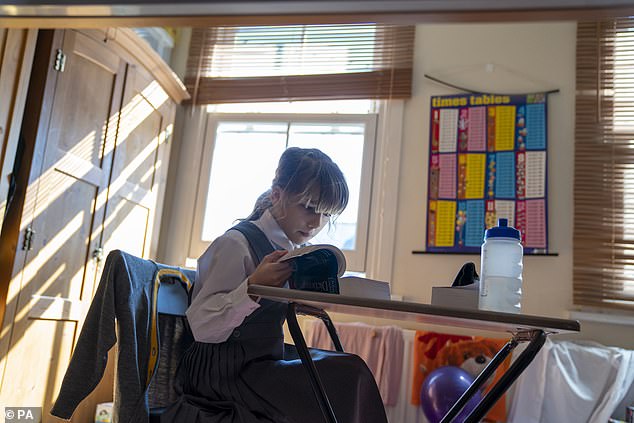 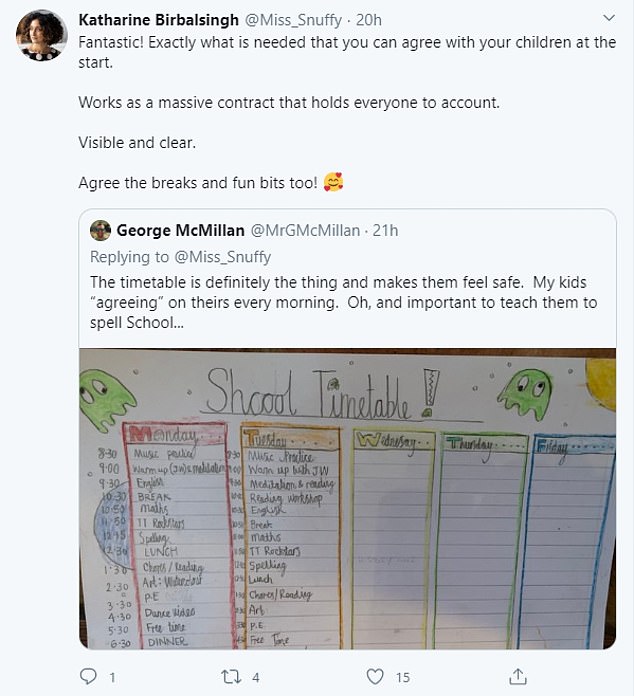 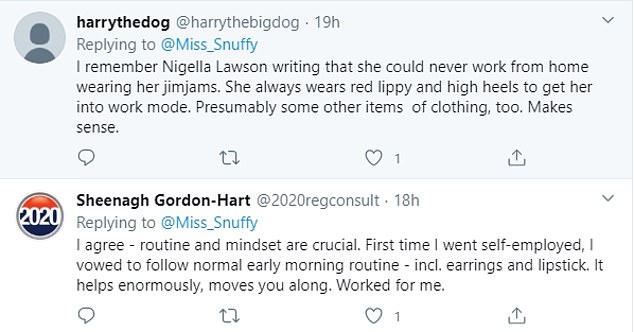 The head praised a parent who shared one such schedule, saying: ‘Exactly what is needed that you can agree with your children at the start. Works as a massive contract that holds everyone to account. Visible and clear. Agree the breaks and fun bits too!’

Most parents reading Birbalsingh’s tips agreed that the uniform trick was a good idea and exactly the same as an adult preparing for an online meeting by wearing smart clothes.

@2020regconsult wrote: ‘I agree – routine and mindset are crucial. First time I went self-employed, I vowed to follow normal early morning routine – incl. earrings and lipstick. It helps enormously, moves you along. Worked for me.’ 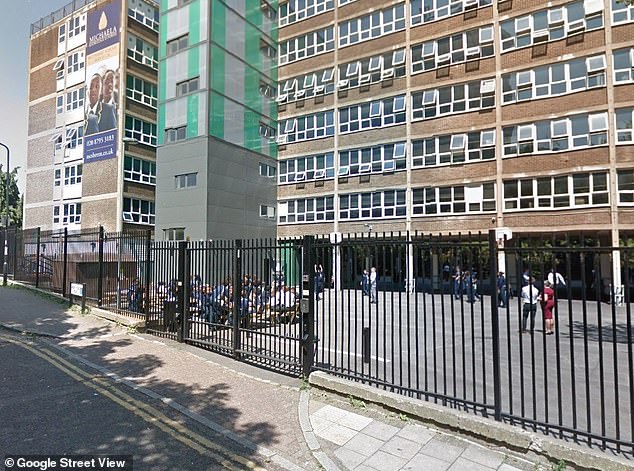 @harrythebigdog penned: ‘I remember Nigella Lawson writing that she could never work from home wearing her jimjams. She always wears red lippy and high heels to get her into work mode. Presumably some other items of clothing, too. Makes sense.’

@emmagoble2 had mixed results with her children though, writing: ‘I started with the uniform thing but then realised that the work space required more comfortable clothing so I’ve bought two sets of navy t shirts and casual trousers and they are only to be worn for ‘home school’. End of school day requires a change of clothes for the evening.’

THE RULES AT  MICHAELA COMMUNITY SCHOOL

Keep to correct uniform and wear it smartly, leaving electronic items, food, drink, gum, and anything else not needed for school, at home

Speak at an appropriate volume

Sit listening silently in the correct place, unless given permission otherwise

School shoes should be black, flat and logo free. Trainers, boots, suede and logos are not allowed at school. Similarly, shoes that are considered to be trainer-like in appearance are not allowed. This ruling also applies to branded shoes

Hair will be in a conventional style. Hair styles that grow out instead of down, and therefore do not touch the collar, must look professional

If a pupil attends school with a pattern shaved into their eyebrow, they will be banned from attending school until it grows back fully or the school will insist the entire eyebrow is shaved off

Nail varnish of any description, nail extensions and henna decorations are also forbidden

No jewellery whatsoever except a plain and functional watch