Honours even in the Battle of the British anthems! Welsh supporters in the ground belt out Land Of My Fathers before the Three Lions’ proud rendition of God Save The King

Welsh supporters belted out Land Of My Fathers before England fans roared God Save The King ahead of the Battle of Britain.

Thousands of supporters from both nations have filled the Ahmad bin Ali Stadium for tonight’s crucial World Cup clash.

Led by captain Gareth Bale, the Welsh players boomed out their national anthem with the assistance of the thousands of fans forming the Red Wall.

The players stood proudly with their arms wrapped around each other as they sang ‘Hen Wlad Fy Nhadau’, otherwise known as the Old Land of My Fathers. 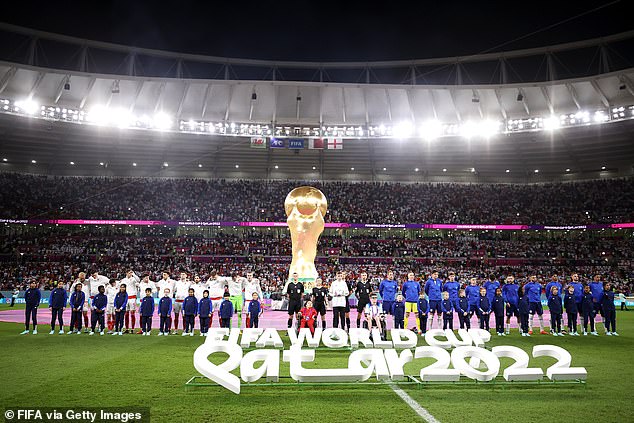 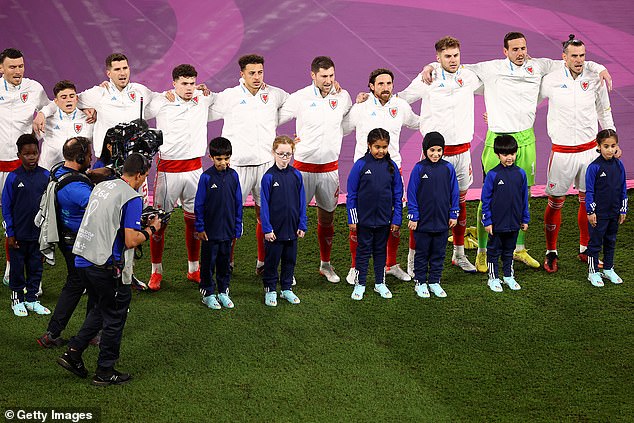 Led by captain Gareth Bale, the Welsh players boomed out their national anthem with the assistance of the thousands of fans forming the Red Wall 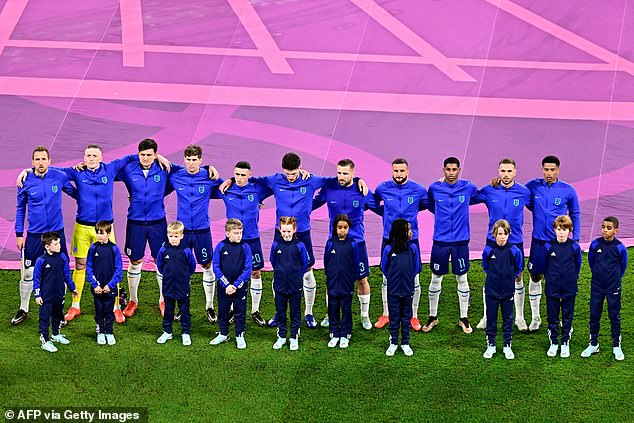 They were followed by a similar bellowing from England players and fans singing God Save the King.

England had already scored a victory at kick-off with its fans outnumbering the Wales supporters by three to one inside the 42.000-seater Ahmad bin Ali Stadium.

But as the match got underway, during a break in play England fans sang the national anthem only for it to be booed by Wales supporters.

Wales fans also began taunting England by singing a song to the tune of a Monty Python tune.

Referring to the closeness of the English and Welsh border, they chanted ‘Always s- – t on the England side of line.’

Some of the St George flags behind the goal England defended in the first half were from Nottingham, West Bromwich, Ellesmere Port and Huddersfield.

Earlier, both sets of fans faced strict security checks getting into the stadium after a supporter invaded the pitch with a rainbow flag during a game last night. 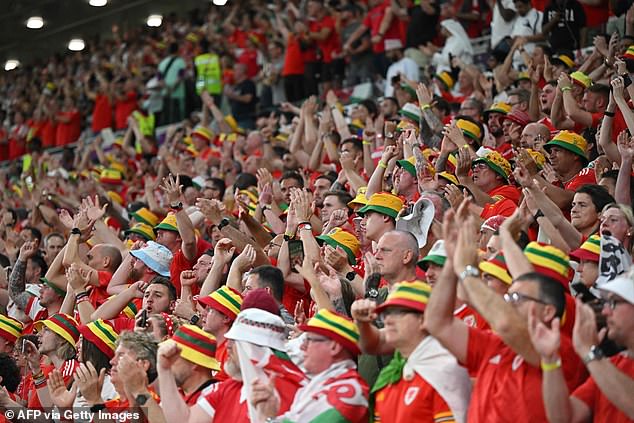 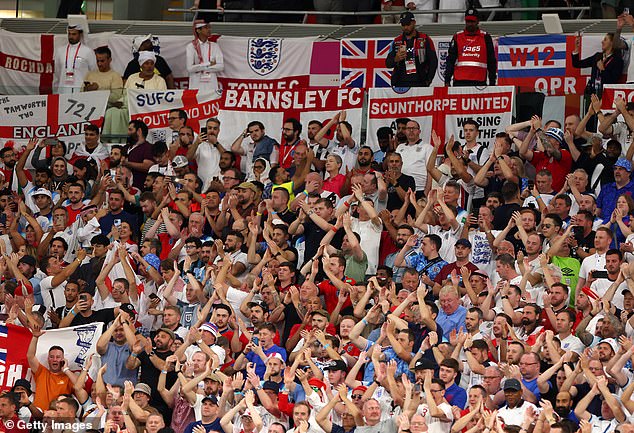 Fans of England show their support during the match against Wales

Fans were having their flags checked before entering Ahmed bin Ali Stadium, with security taking photos and waiting for approval.

Pictures were taken of each flag and sent to a security manager on WhatsApp before a ‘yes’ or ‘no’ was given.

The checks were causing minor delays to some supporters entering the stadium before kick-off.

Back home, meanwhile, England and Wales fans left work early to pack pubs on both sides of the border ahead of tonight’s ‘Battle of Britain’ in the World Cup.

Jubilant workers bragged of swift exits from the office, with many heading straight to the pub on a day when some £215million is expected to be spent on booze.

Generous bosses allowed staff to be flexible in the hours running up to the much-anticipated clash in Qatar, with some even offering to provide a £25 bar tab for drinks and food, and paracetamol for the inevitable sore heads tomorrow morning.

Gareth Southgate’s Three Lions have won the last six matches against their rivals, but Rob Page’s men, led by talisman Gareth Bale, need their first win over England since 1984 and other results to go their way as their last 16 hopes hang by a thread.