A real tear-jerker! Family home that played a leading role in a John Lewis Christmas ad is listed for £2.8m and has an entire floor dedicated to a classroom

Its emotional television adverts are hotly anticipated every Christmas and have become a modern indicator that the festive period is beginning.

John Lewis spends millions of pounds on the ads, which are renowned for being beautifully filmed and in stunning locations and homes.

One of those properties featured in the retailer’s 2014 advert, which showed an inseparable boy and a penguin playing hide-and-seek together.

The house in Surrey’s Kingston-Upon-Thames has just been listed for sale by Savills estate agent, with an asking price of £2.8million. 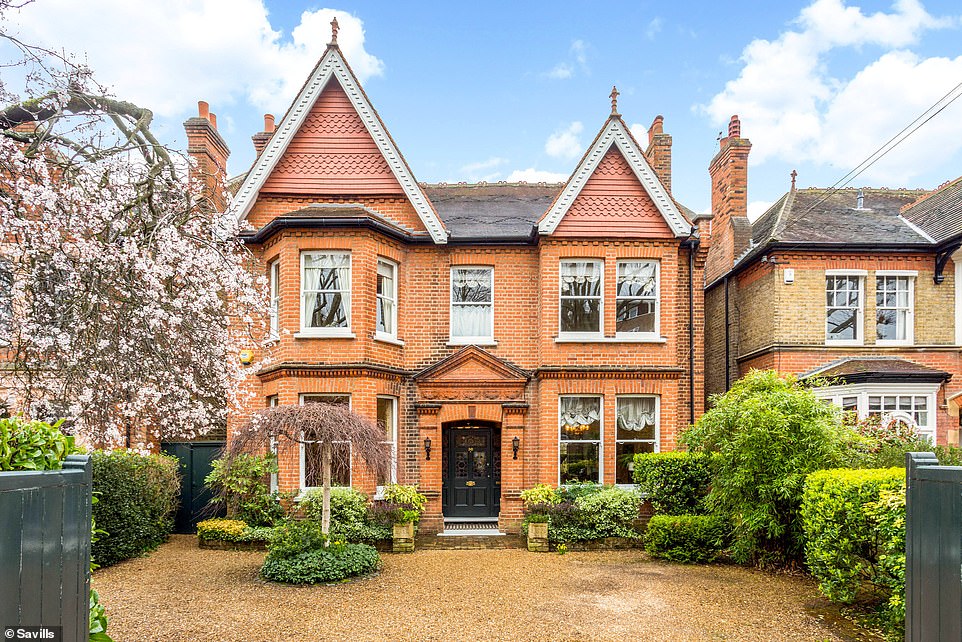 The crew behind the John Lewis advert filmed at the property for 10 days and painted the house in John Lewis green. No other homes were used in that year’s Christmas advert.

The property has also had other starring roles, with the kitchen used by the junior version of the Great British Bake Off, and other parts of the property used by Ford for some of its advertising campaigns.

Daniel Hutchins, head of sales at Savills Richmond, said: ‘This handsome detached Victorian home is enviably situated within just a few hundred yards of a particularly scenic stretch of the River Thames and delightful Canbury Gardens.

‘It retains its period integrity beautifully and provides a perfect setting for both family life, and more formal entertaining.

‘The house has a wonderful atmosphere, so beautifully captured in the much acclaimed John Lewis Christmas TV advert of 2014 – of penguin fame.’ 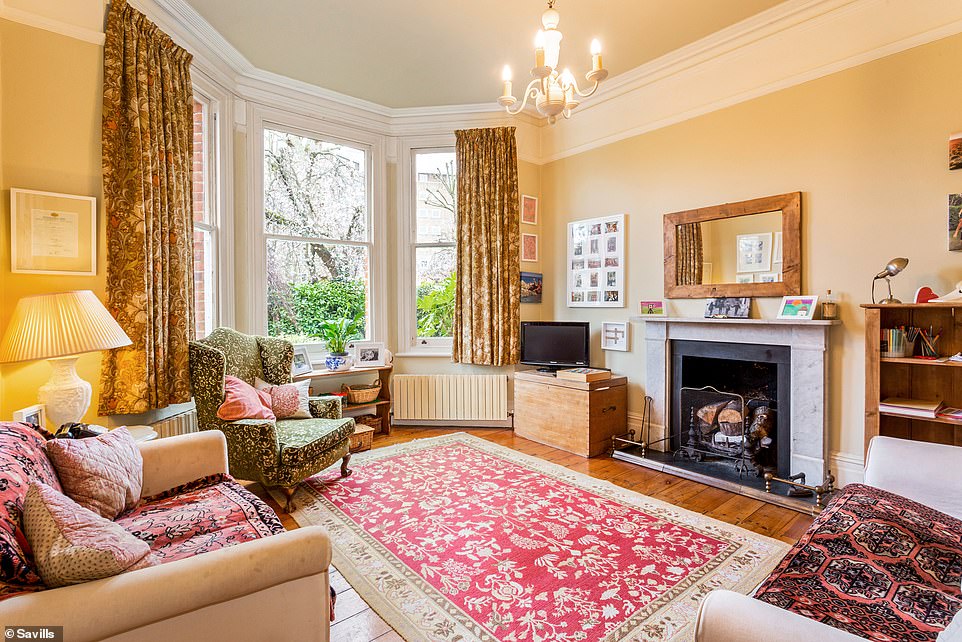 The interior is warm and bright today, but it was painted in green paint for the John Lewis Christmas advert 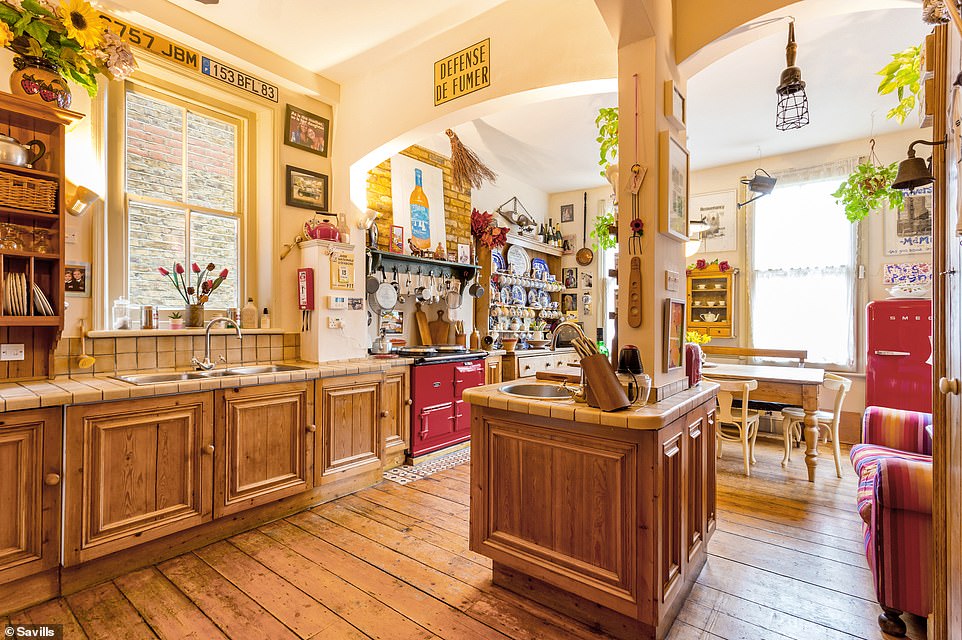 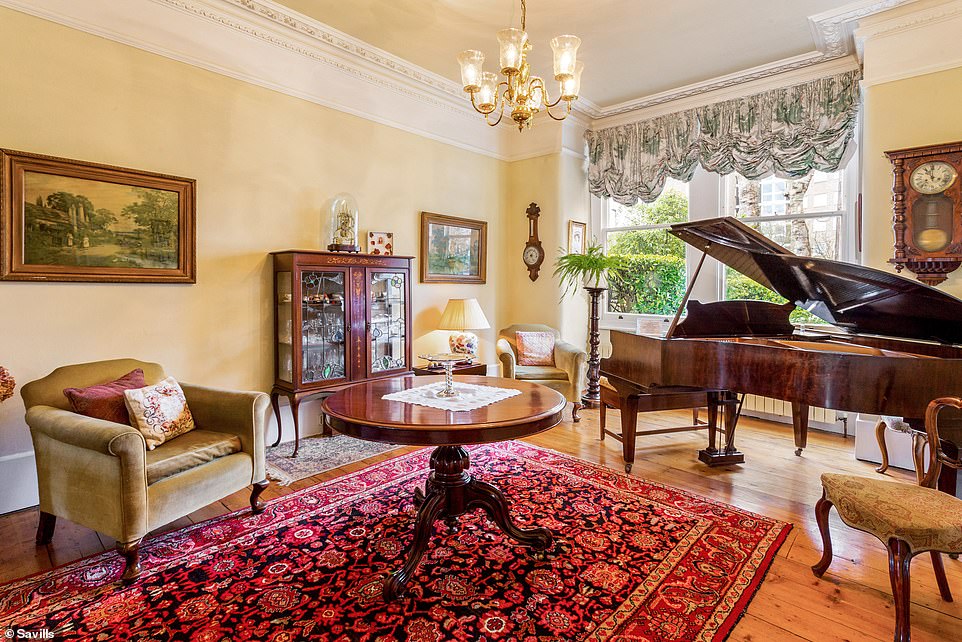 The house extends across four levels, with two living rooms and a kitchen on the ground floor, along with five bedrooms on the first floor and a separate basement.

If any further evidence was required that this is a family home worthy of a starring role in a top production, the entire top floor is a loft extension that has been designated a child’s play and learning area.

The space is being used as a classroom, and has room for enough tables and chairs to accommodate more than a dozen children. There is an exposed brick wall and wooden beams in the ceiling.

It would be the ideal space for home schooling during lockdown. The Government has advised against moving home unless absolutely necessary during the coronavirus outbreak.

The space on the top level of the property could serve equally well as a vast master suite or be divided up into two or three bedrooms with a bathroom. There is also the opportunity to use this space as an office. 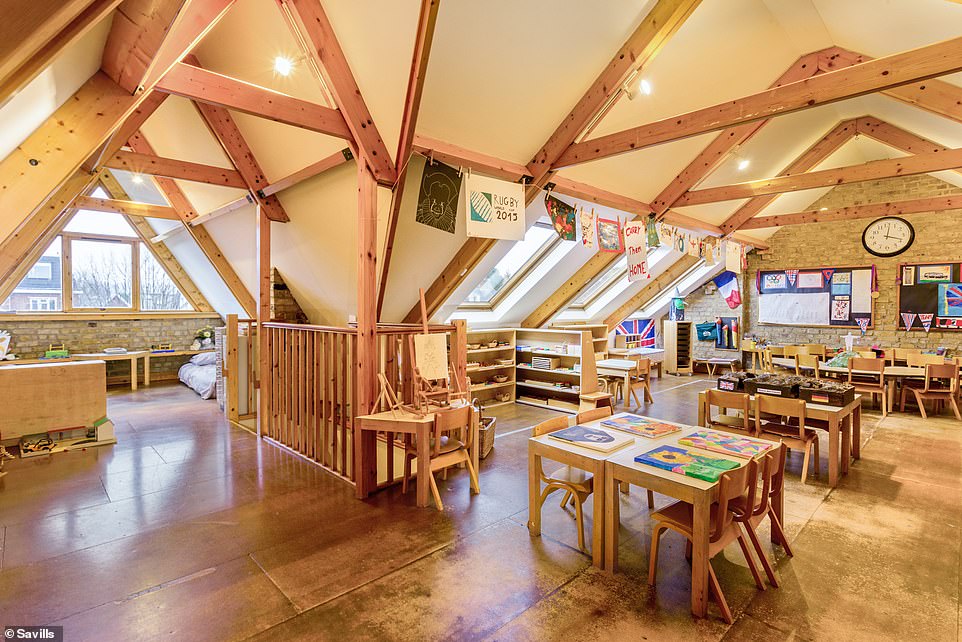 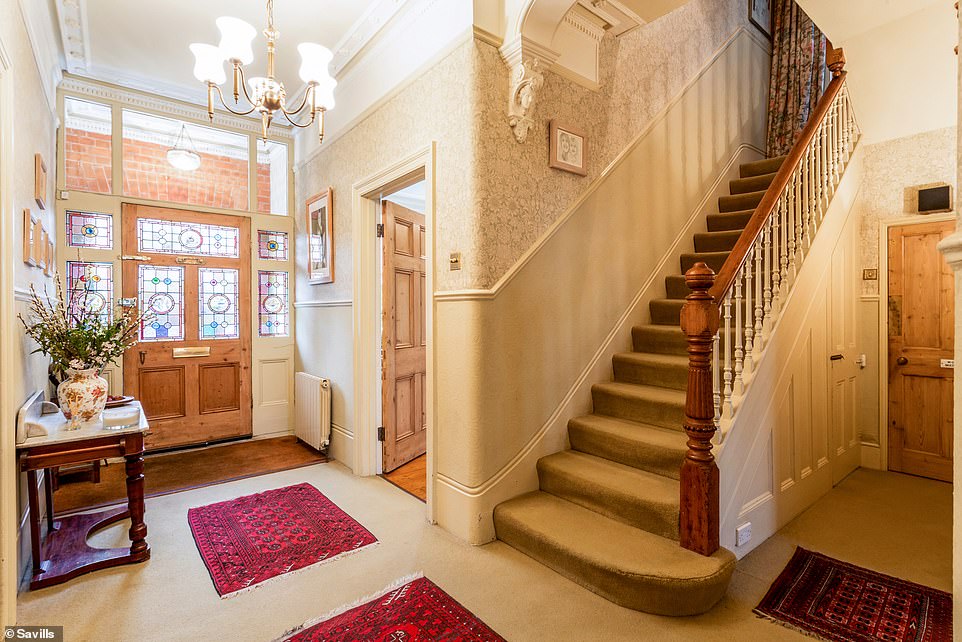 First impressions count! The sale of the stunning property is being handled by the estate agents Savills 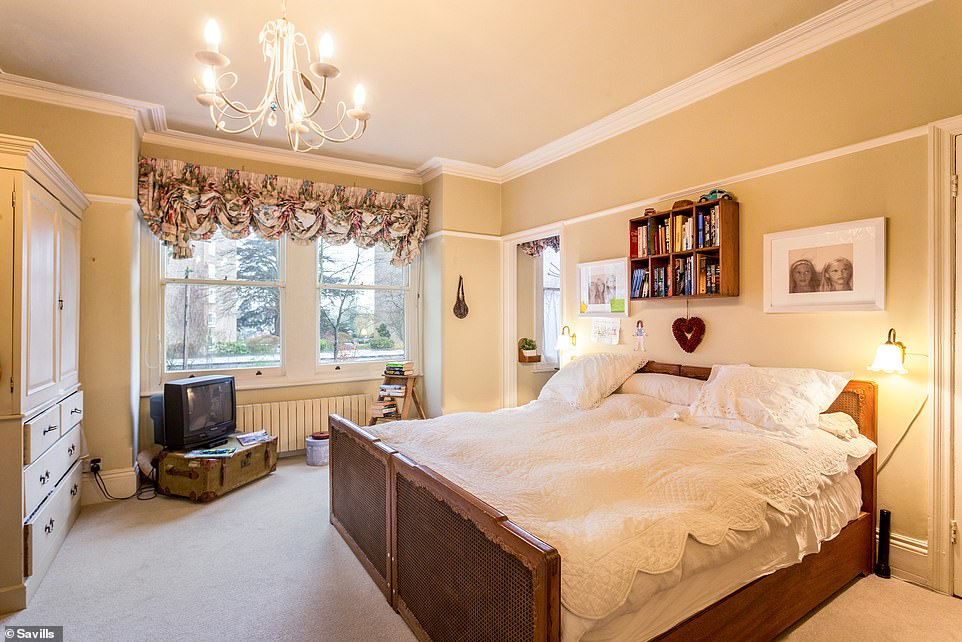 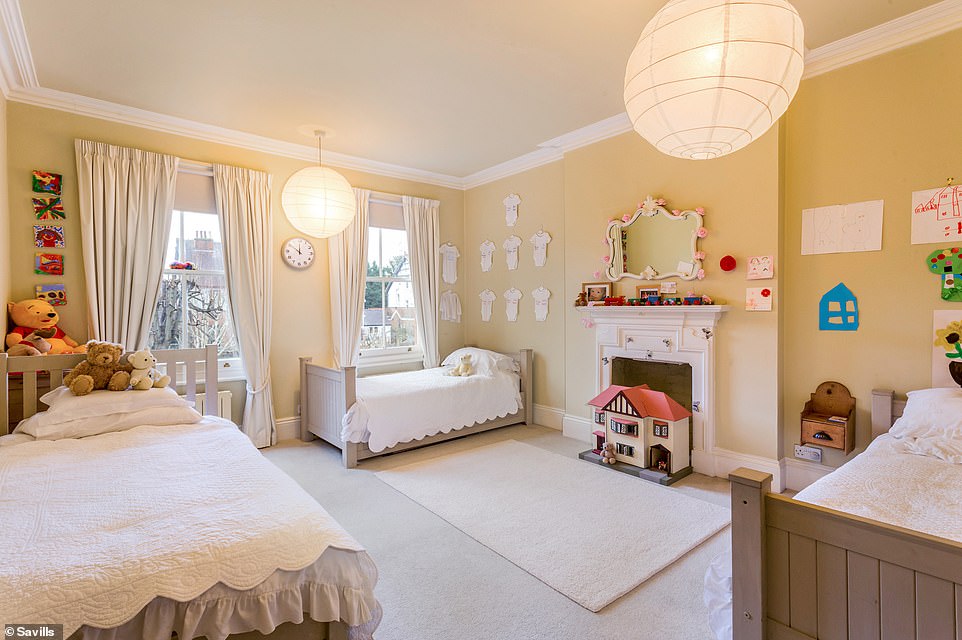 Outside, there is a well-established and private garden at the rear of the property and a large area at the front, with secure parking for several cars.

The property is a few hundred yards from the River Thames and is near to both Richmond and Kingston town centres – the latter being only a few minutes walk away.

Both nearby Richmond and Surbiton have rapid and direct train services into London Waterloo whereas Richmond also has the District line tube and overground service.

Local schools, both private and state, are considered to be among the best in the country. These include the Tiffin Girl’s school.

The average price of a property in Kingston-Upon-Thames is £599,974, according to property website Zoopla. It is almost double the average £319,967 for the country as a whole. 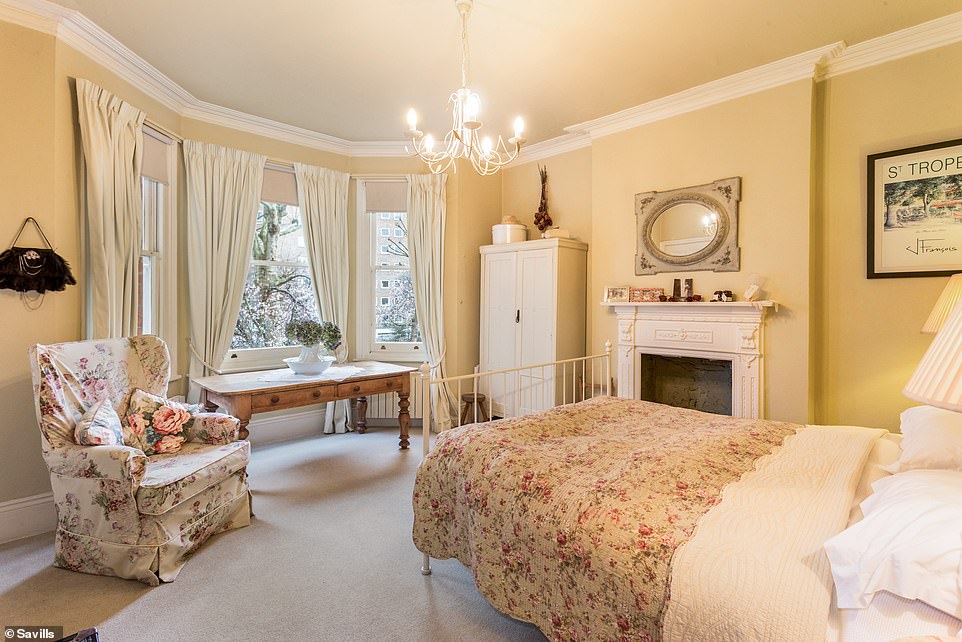 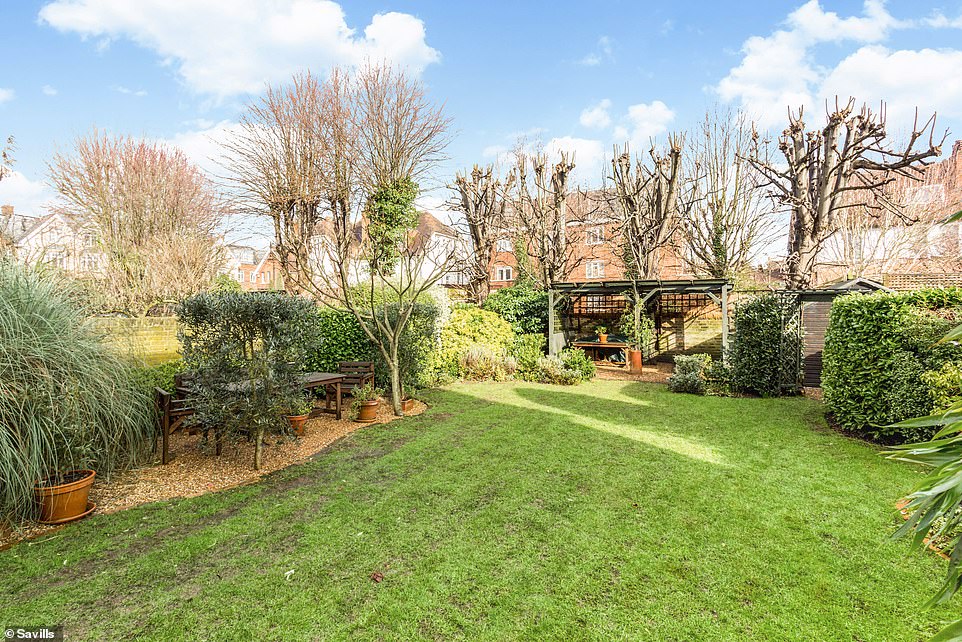 There is a large garden at the rear of the property, which includes a lawn area