House price gains over the past year push 1.8million homes up a stamp duty bracket – spelling bigger tax bills after the holiday ends

House price inflation over the past year has pushed almost two million properties into the higher stamp duty bracket.

Demand among buyers is down 28 per cent from its pandemic peak ahead of the stamp duty deadline on Wednesday June 30, but still considerably higher than in previous years, according to property listing site Zoopla.

Zoopla’s index puts property inflation at 4.7 per cent – less than broader rival reports from the ONS, Nationwide and Halifax – but the £10,246 average house price gain moved 1.8million homes up a stamp duty threshold.

Its report said the average house price is £229,300 and named Liverpool, Manchester and Sheffield as the nation’s major city property hotspots, with average prices up 7.9 per cent, 7.2 per cent and 6.6 per cent, respectively. 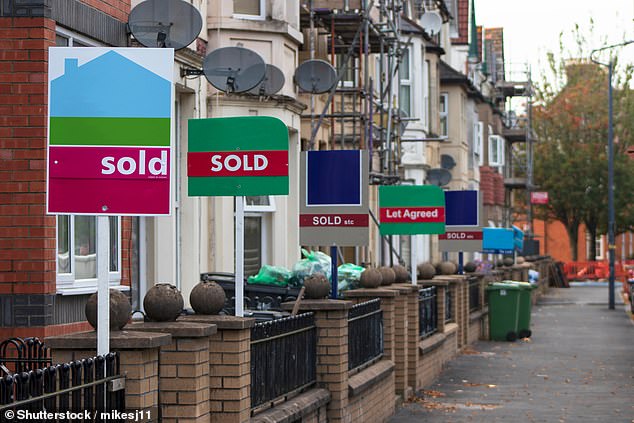 Average house prices are up £10,246 in a year, the largest rise since October 2016, according to Zoopla

The report comes ahead of the phased end of the stamp duty holiday this week, which will see no tax on the first £500,000 of a property purchase price replaced by none on the first £250,000 until the end of September.

Stamp duty is due to return in full after that and buyers are likely to face even bigger bills due to rising property prices.

Zoopla suggested that demand has already decreased from its peak. It defines demand as the amount of active engagement with estate agents, covering both calls and email enquiries about properties listed on its site.

However, Zoopla, which measures 64 towns and cities across its index, insisted that demand is ‘still acute’, and remains 55 per cent higher than the average recorded in the more ‘normal’ market of 2019.

The supply of property listed for sale continues to fail to keep up with demand, with total listings down 24 per cent year-on-year.

However, Zoopla said that despite the lack of homes for sale, Britain remains on course to see 1.5 million sales this year.

Earlier this year the property website predicted sales would reach 1.5million, up 45 per cent compared to 2020 – and a figure that would mark 2021 as the busiest sales market since the peak before the financial crash and one of the 10 busiest since 1959.

Supply is being absorbed in part by first-time buyers, who are flocking back to the market – without replenishing supply. They are taking advantage of the stamp duty exemptions that extend beyond the end of June deadline, as well as a wider range of mortgages to choose from.

Zoopla predicts that demand will remain elevated for the rest of the year as the search for space continues and as homeowners make housing decisions based on more flexible working policies. 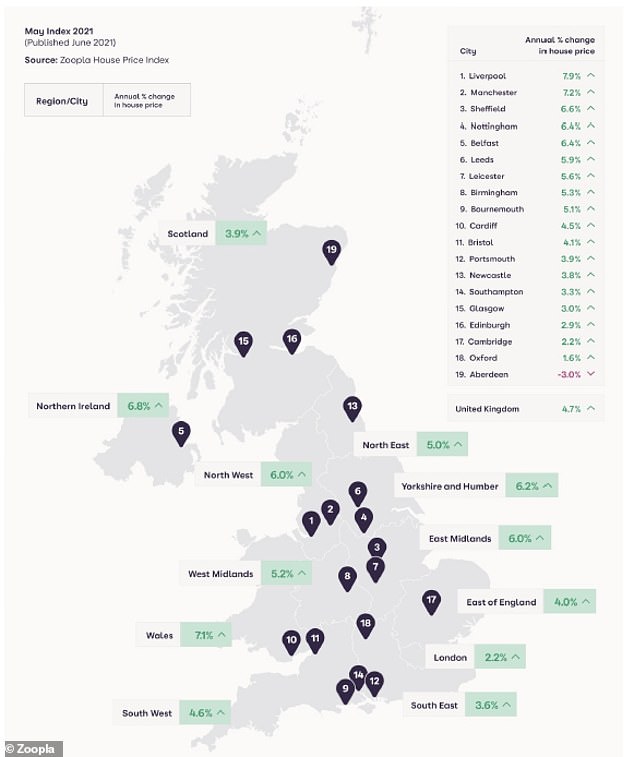 Zoopla’s 20 City Index shows Liverpool as having the highest house price inflation, whereas Oxford has the lowest and and oil industry-dependent Aberdeen is seeing prices fall 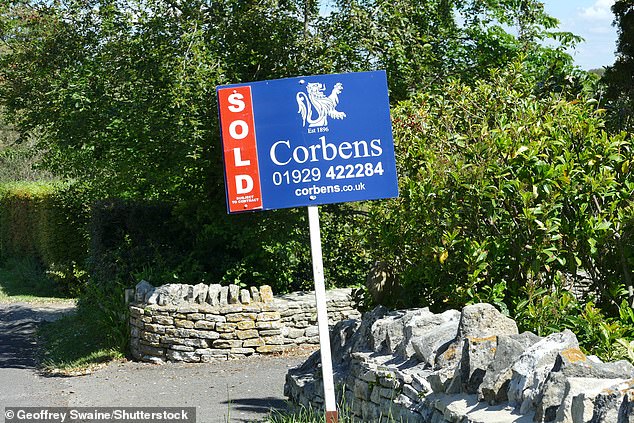 The intense market activity of the past 12 months has accelerated house price growth. The figures emerge at the same time as stamp duty relief starts to taper, marking a double stamp duty win for the Treasury.

The number of homes in the lower stamp duty bands in England is falling, while price growth means it is rising for the top bands. 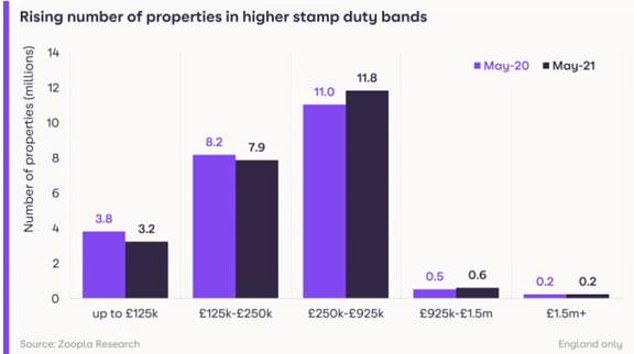 Zoopla said 1.8million homes have been pushed into a higher stamp duty bracket

Strong buyer appetite has also shaped the time it takes to sell a property – from the point of listing to agreeing a sale.

The time to sell has almost halved, down from 42 days in May 2019 to 22 days in May 2021, even though May is typically one of the fastest moving months in the property calendar.

This increase in the pace of a sale reflects how buyers are continuing to make their move regardless of the stamp duty deadline – with the majority of sales agreed in May unlikely to benefit from the larger stamp duty tax relief. Zoopla says this underlines the ‘reassessment of home’, which is fuelling buyer activity, and which has further to run. 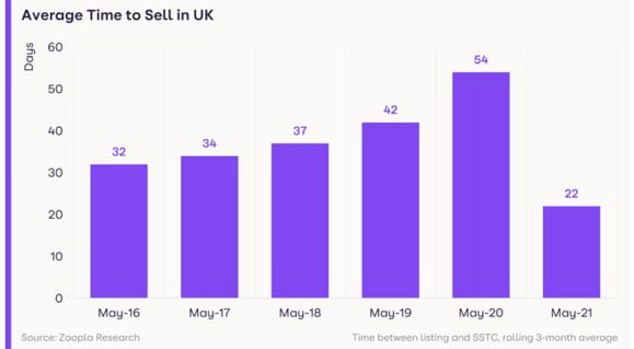 The largest share of demand is for homes priced up to £250,000, meaning they are stamp duty exempt until the end of September when the tapering period comes to an end.

While buyer demand for properties below £250,000 is down 24 per cent from April’s highs in England, demand levels remain 75 per cent higher than the average recorded in 2019’s ‘normal’ market.

At the same time, demand for properties priced above £250,000 has dipped by a third since April – the last point at which buyers could try to benefit from the maximum stamp duty saving – but remains up 86 per cent compared to average 2019 levels.

Zoopla said average house prices rose by 1.1 per cent in the three months to May, taking the annual rate of growth to 4.7 per cent, matching that in February of this year, which was the highest since the start of 2017.

It said this is supported by elevated levels of market activity compared to the 2017 to 19 average.

The spread of price growth continues to widen across the country, with Wales up 7.1 per cent, Yorkshire and the Humber up 6.2 per cent, and the North East up 5 per cent – marking a 10-year high for these regions.

Meanwhile, some of the most affordable markets are recording the highest house price growth with Rochdale up 9.9 per cent and Bolton up 8.7 per cent.

They are followed by Hastings in third place, where values are up 8.2 per cent. While it doesn’t offer the affordability of its northern counterparts, it is comparatively affordable to its neighbour, Brighton, just along the coast.

Grainne Gilmore, of Zoopla, said: ‘The stamp duty holiday boosted demand in the housing market, yet buyer demand remains elevated despite the initial holiday ending – signalling that the once-in-a-generation ‘reassessment of home’ has further to run this year.

‘Demand may ease further as the reopening of the economy allows people to do more and travel more widely, but at the same time, the confirmation of working practices for office-based workers will lead to more homebuyers being able to push ahead with a move.

‘The total stock of homes for sale continues to run well below historical norms, and this will underpin pricing. At the same time, it may also constrain potential activity, especially for buyers looking for family houses. Even so, we forecast that this year will be one of the busiest for the housing market since the global financial crisis – with 1.5 million residential transactions.’

Mortgage experts highlighted how buyers can still benefit from some stamp duty savings until the end of September. Until then, no tax is due on the first £250,000.

Will Rhind, head of mortgage advice at Habito, said: ‘All good things must come to an end, and the stamp duty holiday is no exception. However, homebuyers completing before the end of September will still benefit from some savings.

‘The property market was hugely bolstered by the relief brought in on July 8 last year, which was initially intended to end this March. Since last summer, we’ve seen several months of record levels of property transactions as demand outstripped supply.’