One in every 10 women across the world wants to go on solo travelling in 2020, according to new research from booking.com. If you’re looking for inspiration to plan your next trip, read on to hear how cyclist Liz Dodd took an epic trip across the globe on a budget of just £9 a day.

“If you did that, you can do anything,” says Dea, a Dutch cycling nomad. We’re catching our breath at the top of a 3,000m high mountain pass in Kazakhstan. Snow is clumping on the tents and sleeping bags strapped to our bicycles.

Dea has been cycle touring for four years with her boyfriend, and the weight of her words and the wind that blows up the valley from China finally silence the self-doubt I have dragged with me from London. Here I was, a woman whose idea of adventure had been going anywhere beyond the North Circular, at the top of the last mountain in Central Asia.

I had cycled across the world – and I was just getting started. 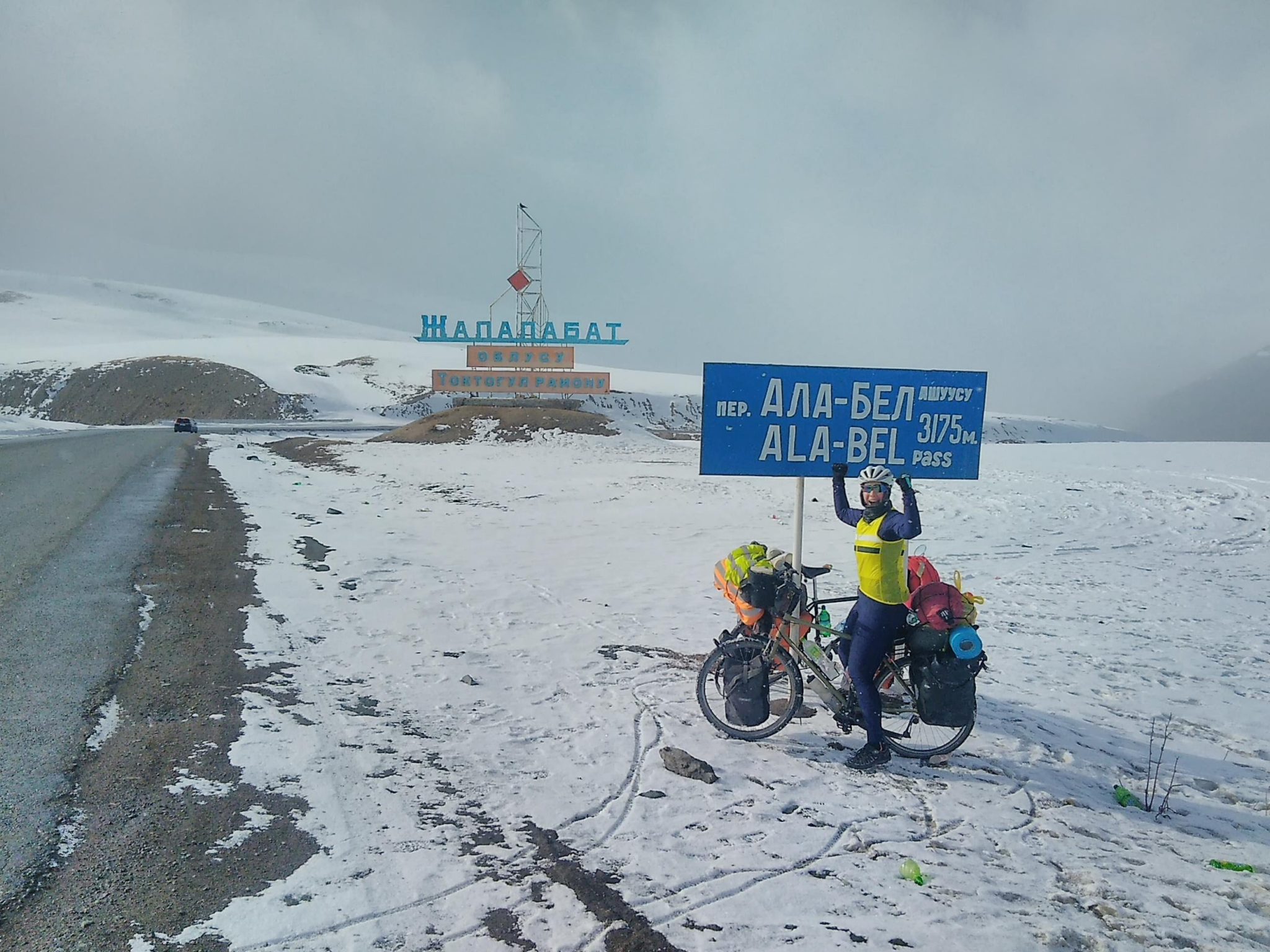 Six months earlier I had ridden away from my houseshare in Hackney with my ‘cycling around the world’ playlist on shuffle, and turned right at the end of my road towards China. I held it together as far as Essex, when, as I rolled down a hill dotted with bluebells, I burst into tears. It dawned on me that I had no idea where I would sleep that night, or any night after that.

Often people go on adventures to escape something, but I had a job I adored and a house full of friends. I was approaching 30, though, and while my friends were Googling family-friendly flats in Brighton I had fallen down a rabbit hole of adventure writing. I kept reading blogs written by cycle tourers on the other side of the world, who were living a freedom I could only dream about on my commute.

Over coffee I said to my best friend: “I think I’m going to try and cycle around the world”. Then I handed in my notice, with work and my landlord. Then I told my family. “Couldn’t you just cycle around the Isle of Wight?!” Mum asked.

I cobbled together about £5,000 from savings, my final salary and a tax rebate. I used Google Maps to sketch out a route through Europe and Central Asia to Southeast Asia, then from Canada to the USA, and finally across Mexico to the Atlantic. I estimated that the whole trip would take me about 18 months. That left me with £9 a day, so I planned to camp most nights, reliant on my wealth of experience at music festivals.

That first night I wild camped beside a lake in Maldon, 43 miles from home. It turned out to be adjacent to an actual campsite, whose owner woke me up at 7am to collect the fee, which was my entire budget for the day. The early start meant I was in Harwich with plenty of time to alarm other cyclist tourers boarding the ferry for more sensible trips, like a fortnight in France, and together we rolled our bikes down the ramp into Europe the next morning. I set off alone for the east, wobbling along Holland’s cycle paths as I adjusted to the 50kg of luggage strapped to the bicycle I’d ridden to and from work – my only training.

It took me until Greece, two months later, to sleep well at night, and tune out the strange noises around my tent. Crossing Europe by bike was a joy: easy days on the bike trail Eurovelo 15 took me past the fairytale castles of the Rhine to Switzerland, where I joined the Eurovelo 6 along the Danube, through Germany into Eastern Europe. I crossed Georgia and Azerbaijan with my best friend, Miranda, who had flown out to join me for a few months.

A cargo boat carried us across the Caspian Sea to Uzbekistan, and winter found us climbing into Tajikistan along the Pamir Highway. One of the highest roads in the world, the crumbling trade artery is a Soviet take on the ancient Silk Road, across the remote Pamir Mountains to China. The hardy, kind people who lived along its length welcomed us into their homes; in between we slept on sand dunes, filtering water from the river that stood between us and Afghanistan. The road continued to climb to 4,700m, and we battled altitude sickness and giardia.

Miranda left in Kyrgyzstan, and as I carried on towards China with Dea and Chris, I learned to fill my drinking bottles with boiling water at night, and stuff them into my sleeping bag, to keep me alive as the temperature dropped to -20C.

In Southeast Asia I cycled through countries I’d dreamed of visiting: from the crumbling ruins of the temples at Angkor Wat in Cambodia to dirt tracks along the misty Mekong into rural Laos. From its French-colonial capital, Vientiane, I biked into Thailand, camping in monasteries, riding off-road south through national parks and tiny villages.

I crossed the Pacific by plane, flying to the very northeastern point of the USA, where it borders Canada. It was spring as I set off along the Pacific coast. I had been on the road for a year, but any weariness was blown away by the spectacular beauty of the Pacific Coast Highway, the famous Highway 101. Whales breached the ocean to my right as I scaled the hills of Oregon and northern California, camping under Redwoods and on the outskirts of San Francisco and Los Angeles.

I had a buddy by the time I hit Mexico: when Trey, a 19-year-old from Oklahoma, cycled into Tijuana, it was the first time he’d left the USA. Like me, he’d devoured cycle touring blogs, saved up his wages, and hit the road for the end of the earth, Ushuaia in Argentina.

By the time we split in Mexico City I’d taught him everything I’d learned from 18 months on the road: how to make coffee in a saucepan and dry laundry on a bicycle. 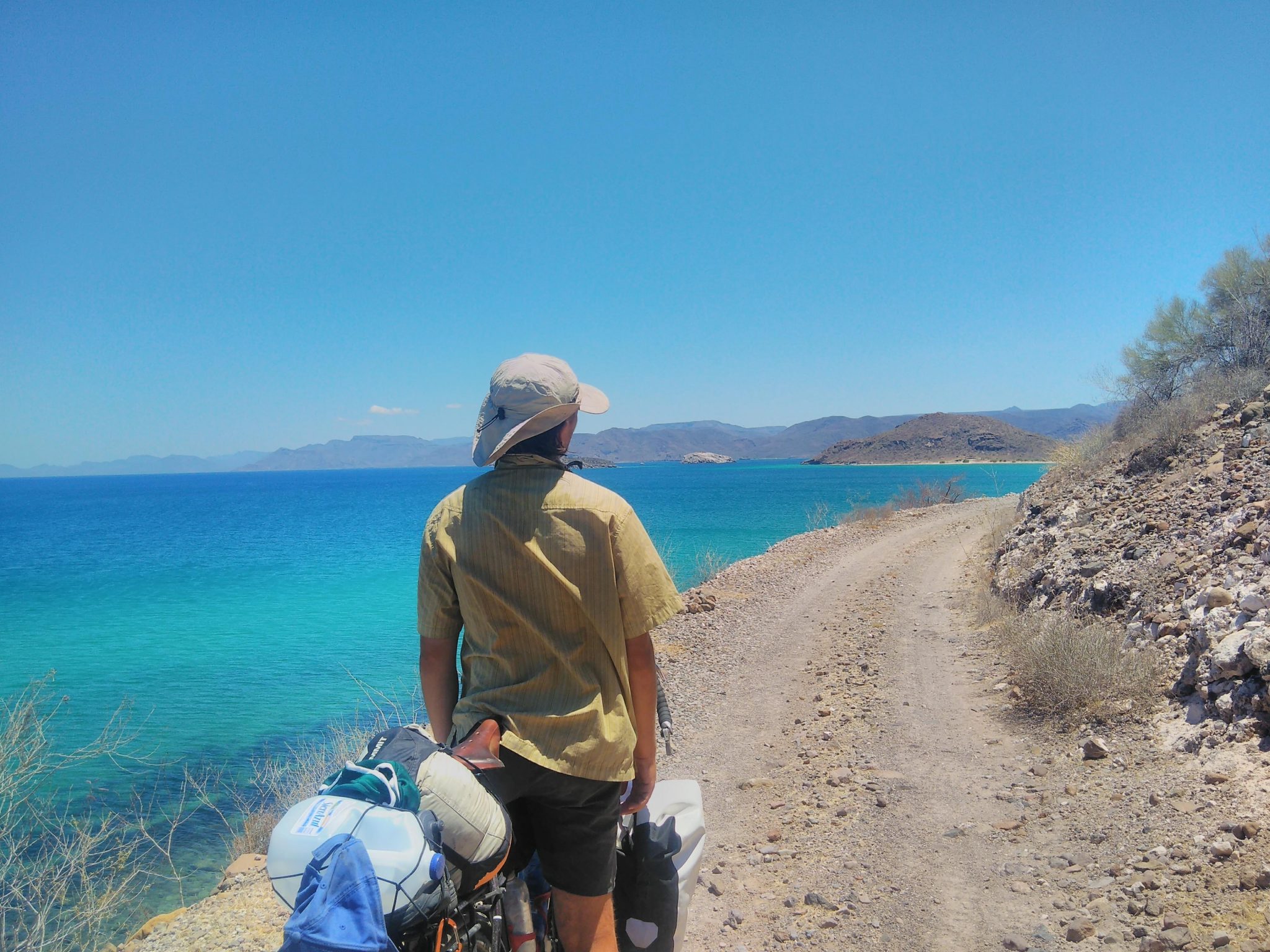 The day I landed at Gatwick, my bicycle in a cardboard box, Trey messaged from Guatemala to say his girlfriend had decided to join him, and she wanted some advice – woman to woman. In 18 months I had been the only woman I’d met cycling alone around the world. I’d had close calls – twice I’d had to use my penknife to defend myself – but so had male cyclists I knew.

When I struggled to sleep in my tent, in the Baja Desert or the Kazakh Steppe, I remembered I was – statistically – safer than I would be walking home from a night out in London.

I recalled what Dea said to me at the end of Central Asia. “Tell her she can do anything,” I replied. “And she only needs three pairs of pants.”

Solo travel: how to cycle around the world in five easy steps 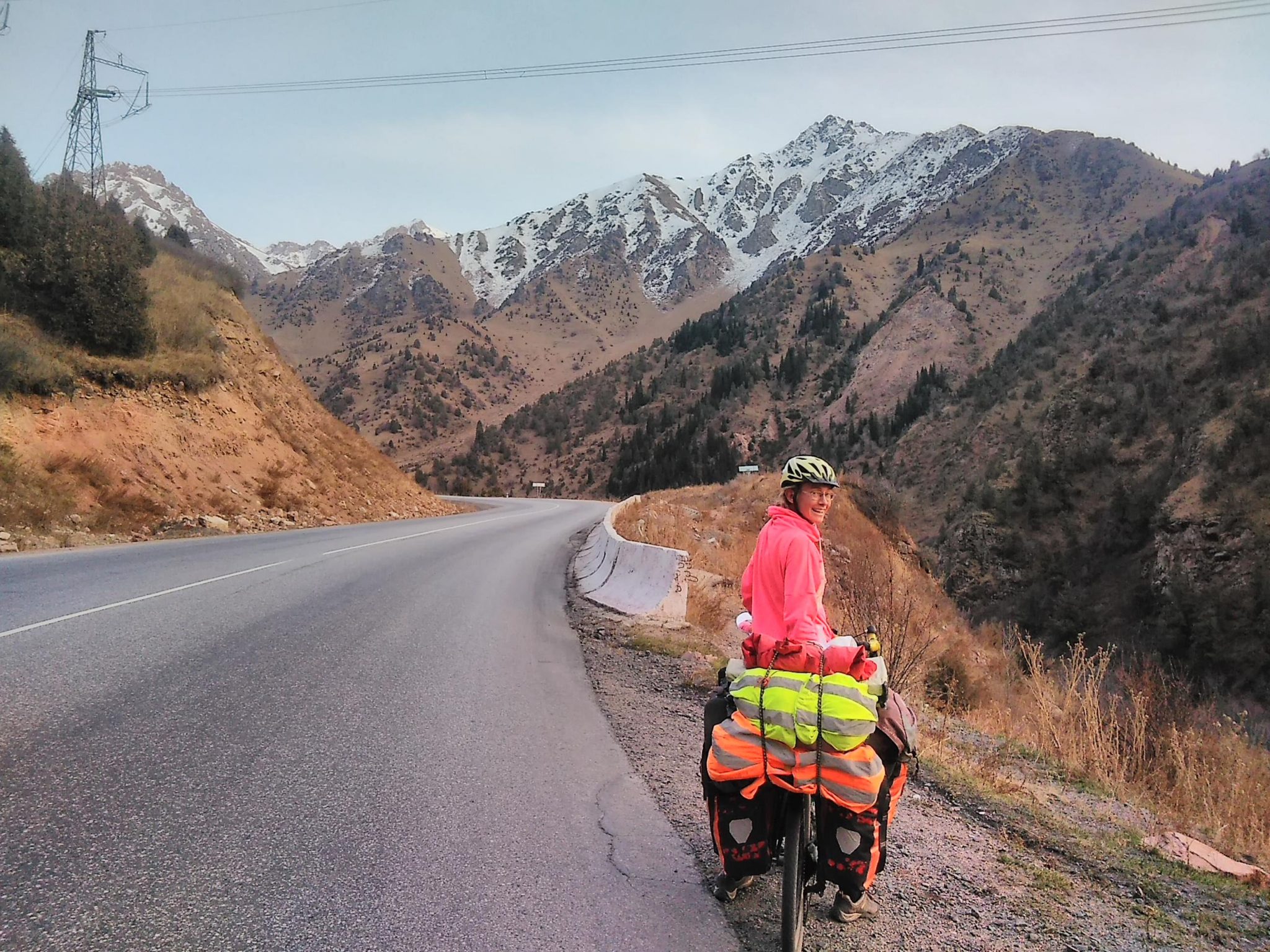 ●Get inspired. The website Crazy Guy On A Bike hosts more than 14,000 cycle touring journals and articles. From Paris to Papua New Guinea, if you can name it, someone has cycle toured there and written about it.

●Pick a route. The Eurovelo network of cycle trails spans 42 countries, with its longest route running 10,400km. The Adventure Cycling Association has a similar network for the USA.

●Buy a bike. Look for an “expedition” or touring bike with lots of gears and front and rear racks for luggage. The list on this blog is comprehensive. Don’t worry too much about training: go at your own pace, and you’ll build fitness as you go.

●Wild camping is illegal in some countries, so use your discretion. A number of user-maintained, free apps and websites maintain wild camping maps; ioverlander is the best and shows paying sites too.

●If you don’t fancy camping but are still on a budget, or you just don’t want to tour alone, join the network Warmshowers. Like Couchsurfing for long distance cycle tourists, its amazing hosts offer hospitality and – usually – a free dinner.

This feature was originally published in April 2019