Longtime taproom bartender at New York City's The Dead Rabbit Grocery and Grog, Alicia Jonson, walked me through the bar's very technical and precise process for pouring a perfect pint of Guinness.

The Dead Rabbit is known as a legendary Irish pub. Its beverage director Jillian Vose told Insider that they have a Guinness training program set up for all new hires to teach them the best techniques for serving up the dark beer.

"Pouring a perfect pint really comes down to the cleanliness of the glass," she said. It's such an important part of the process that Jillian's team built out a dish-washing room with two dishwasher machines dedicated specifically to Guinness glasses.

She said it's important for the glasses to be washed separately from others so that there's no cross-contamination of residue, which would lead to bubbles forming inside the pint. If the glass is dirty, "your Guinness will be flat and it will look like s—."

The first step is to make sure you have a clean glass. 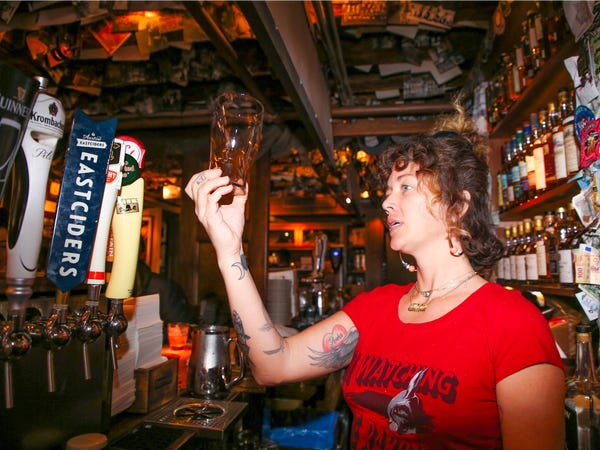 Alicia Jonson, a bartender at The Dead Rabbit's taproom, held a glass up to the light to inspect it. "If it's not clean, it's going to yield bubbles inside," she said.

Jillian Vose, beverage director at the bar, said this is one of the most important parts of getting a perfect pint.

Then comes the first of three pours. 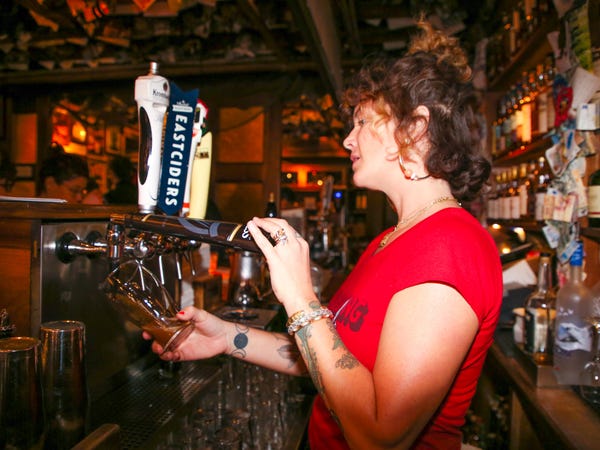 Traditionally, a pint of Guinness will be filled in two pours, but Vose explained that after a lot of research and trial and error, she and her team decided that three pours yield the best and most consistent results.

Jonson said it's important to hold the glass at a 45-degree angle to the nozzle. While she's sure not to touch the tip of it to the glass, "keeping it close to the top" is key.

When the beer reaches about three-quarters of the way up the glass, that's the end of the first pour.

Then it's a waiting game until pour No. 2. 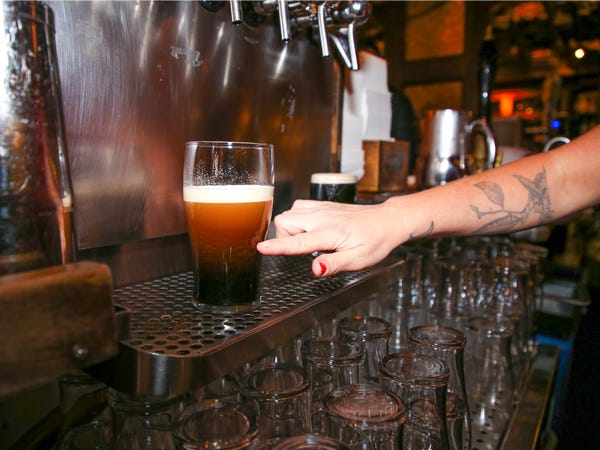 "As you can see, it's starting to settle and get more black," Jonson said. She waited until there was about an inch of brown left below the head before starting the next pour.

The second pull starts with the glass at an angle … 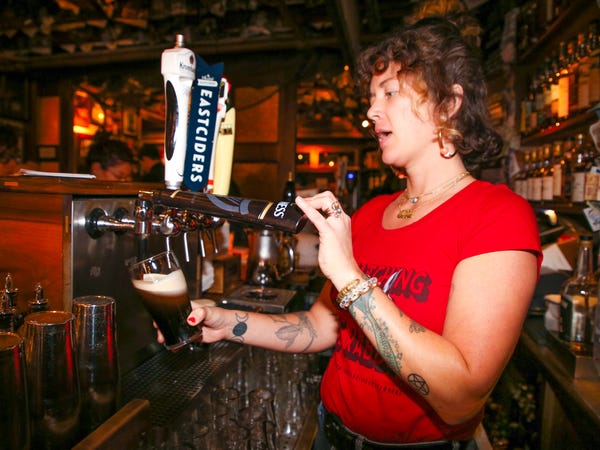 … and ends with it leveled out. 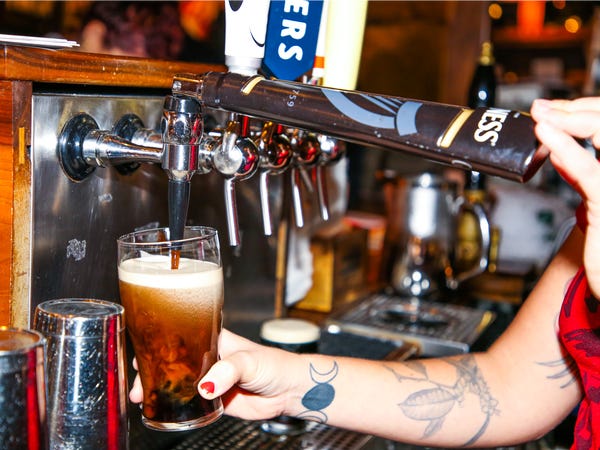 Jonson said it's important to make sure that as you go through the second pour, you level out the glass as it fills.

She halted her second pour just before the beer reached the lip of the glass. 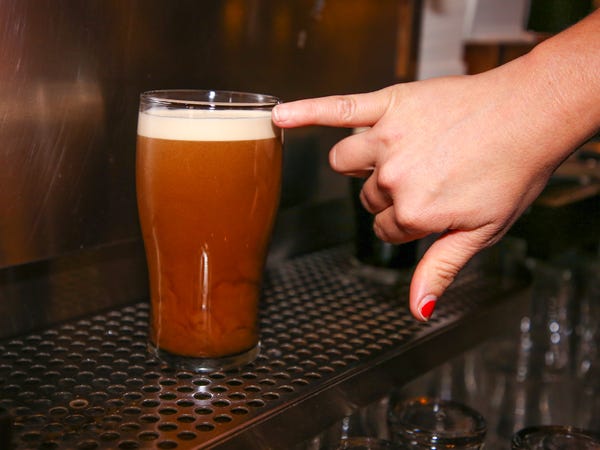 Jonson stops her second pour when the head is about "a finger" (or around an inch) from the rim of the glass.

It's then time to wait again before finishing it off. 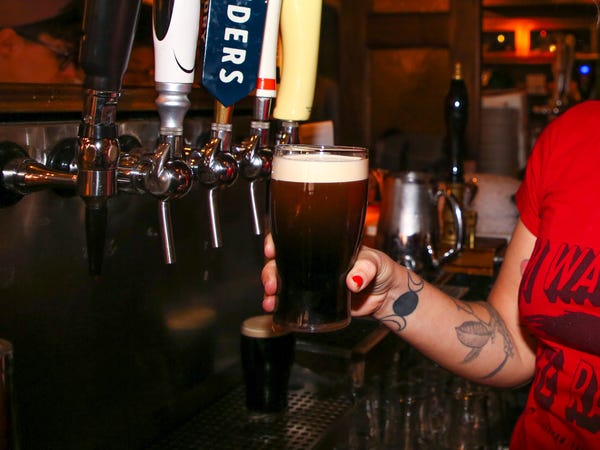 Then she waits again until the glass is nearly completely black and mostly settled before going back in to finish it up with one final pour.

When it comes to finishing up, Jonson said you can either push the tap back or pull it forward. 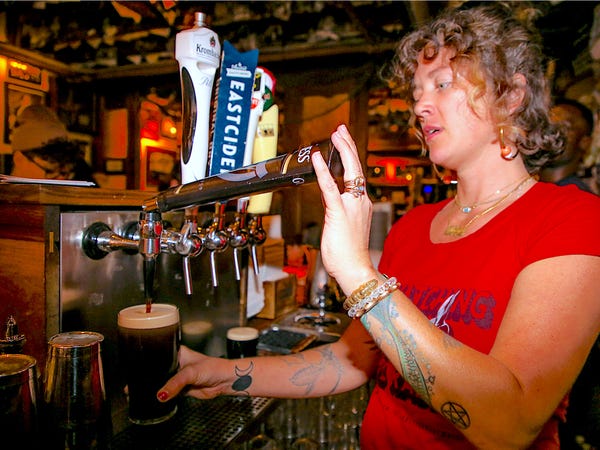 She typically pulls it forward right in the center of the glass.

Jonson and Vose both said there's no significant difference in the result when it comes to pulling forward or pushing back the handle.

The pint should be served right after the third pull when it's the freshest. 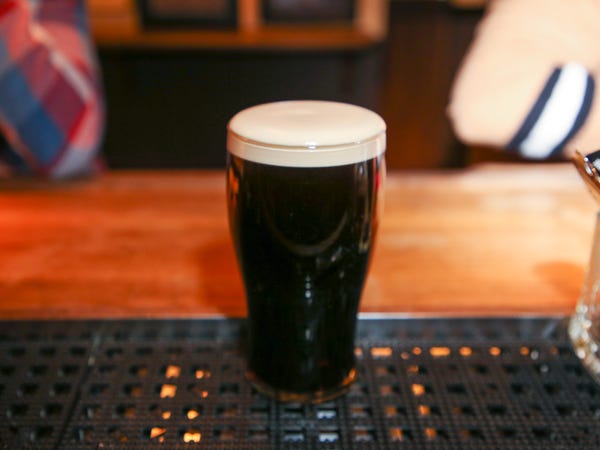 Before serving, Jonson makes sure the pint has a nice "muffin top." That means she checks the head and confirms it's not spilling over the top, but that it's also not below the rim of the glass.