It is widely believed that, 3,600 years ago, the ancient Egyptian pharaohs were usurped by an invading force known as the Hyksos.

However, new research claims the Hyksos people were actually a group of immigrants who had lived in Egypt for centuries before rising to power.

Analysis of the teeth of these people revealed they were descended from groups all over Asia who had inhabited Egypt for generations.

As a result, scientists now believe the Hyksos were not an invading force, dispelling the traditional narrative.

The Hyksos ruled for 100 years before the pharaohs retook their land and exiled the Hyksos folk. 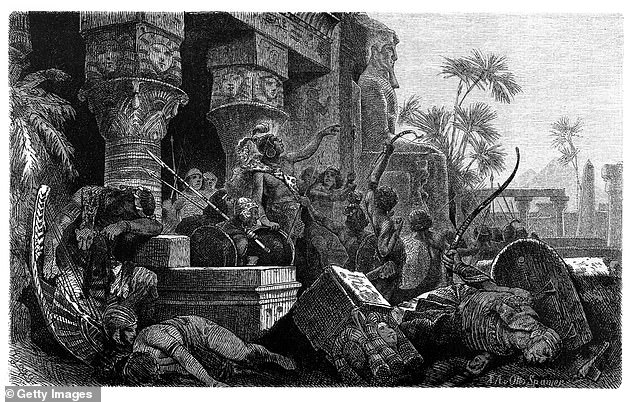 It is widely believed that 3,600 years ago the ancient Egyptian pharaohs were usurped by an invading force known as the Hyksos (pictured). However, this theory is now being disregarded and it it thought the Hyskos people were living peacefully in Egypt for centuries before rising to power

Analysis of chemicals in teeth spanning centuries revealed varying levels of isotopes of the element strontium, which paints a picture of the people’s history.

A total of 75 teeth were studied after being excavated from Tell El-Dab’a, the ancient capital city of the Hyskos land.

The strontium levels prove that the people who took over the fertile lands near the Nile did not arrive in one wave, but via a constant trickle over time.

‘[T]hese results challenge the classic narrative of the Hyksos as an invading force,’ the researchers from Bournemouth University write in their study, published in the journal PLOS ONE.

The mummies of two high-status ancient Egyptians discovered in a temple on the Nile delta may bring researchers a step closer to finding the remains of Cleopatra.

The mummies, which had lain undisturbed for 2,000 years, are in a poor state of preservation.

But they were originally covered with gold leaf – a luxury reserved for only the top members of society’s elite – meaning they may have personally interacted with Cleopatra.

Also found at the site were 200 coins bearing Cleopatra’s name and her face, which would have been pressed based on Cleopatra’s direct instructions.

‘Instead, this research supports the theory that the Hyksos rulers were not from a unified place of origin, but Western Asiatics whose ancestors moved into Egypt during the Middle Kingdom, lived there for centuries, and then rose to rule the north of Egypt.’

The findings show a large wave of immigration into the region by Hyskos people centuries before they seized control of power.

Then, when they were in control, the population swelled.

‘This is consistent with the supposition that, while the ruling class had Near Eastern origins, the Hyksos’ rise to power was not the result of an invasion, as popularly theorised, but an internal dominance and takeover of foreign elite,’ the authors write.

Hyskos people were different to the Egyptians in several ways.

For example, they had names similar to inhabitants of the neighbouring region of southwest Asia and not the traditional Egyptian monikers.

According to ancient artwork from the time, they also wore long, multicoloured clothes in stark contrast to the white attire favoured by the natives.

Egyptologist Orly Goldwasser at the Hebrew University of Jerusalem told Science Magazine that the immigrants most likely had peaceful intentions.

It is entirely possible they brought technologies such as the horse and chariot with them and may have even invented the alphabet after arriving.