Jessica Rach, who just hit her second trimester, reveals what it’s really like to be pregnant during the coronavirus outbreak.

I was celebrating my birthday and hitting my second trimester of pregnancy when the real impact of coronavirus hit the UK.

My boyfriend and I had originally booked a trip to Venice, but cancelled it when the virus reached Italy, booking a night in Oxford instead. Then, just hours into our romantic country retreat, Boris Johnson began to warn elderly and pregnant people to stay at home.

Dinner at the hotel was a hushed tense affair, the atmosphere among the few guests muted as the impact of what was happening hit everyone. What was supposed to be a celebration had turned into a worry, and we decided to return home and quarantine in a bid to avoid spreading potential germs to the elderly – and with the pregnancy very much at the forefront of our minds.

We planned our route home according to supermarkets. The week before our trip, we had attempted our usual online grocery shop, but no delivery slots were available so we knew we were returning to an empty fridge.

During the two hour drive, we visited at least six supermarkets. Every shelf in every store was stripped bare, and the aisles were empty. In true British fashion there were no tea bags, cereal or toilet roll to be found.

We joined the few people dotted around desperately looking for leftovers, and bought what we could. It wasn’t much: not nearly enough for a two-week quarantine. As the lady working at the checkout scanned our meagre selection, she told us that she lived with her elderly mother but had been banned from wearing a mask to work.

It was at this point that things began to feel incredibly real.

As we drove home, still stopping every so often to continue our futile hunt for toilet paper, friends began messaging me to ask why I wasn’t safely back indoors. They pointed out that I was in the ‘vulnerable people’ category. Their concern left me torn: I wanted to search for the rest of the essentials we needed, but I also didn’t want to be seen as selfish or irresponsible – both towards the baby and the elderly.

After some deliberation, we decided to ignore the rest of the supermarkets on our route and finish our drive back to London. On the off-chance, we nipped into our local corner shop and discovered a £2.50 toilet paper package. Honestly, it felt like a mirage – never did I think finding bog roll would cause me so much excitement.

A dearth of pregnancy-appropriate painkillers

One thing that was proving tougher to find, however, was paracetamol. Aka the only painkiller pregnant people are allowed to take.

Why? Well, as a warning against ibuprofen for those suffering from Covid-19 symptoms had begun circulating online, everyone had been avoiding it like the plague. As such, there was absolutely no paracetamol to be found in the area.

I have always suffered from extreme headaches and migraines, which have increased during pregnancy. Despite my boyfriend searching as many as 20 stores in the nearby areas, though, we couldn’t find any, so I tried my hardest to sleep off the pain instead. 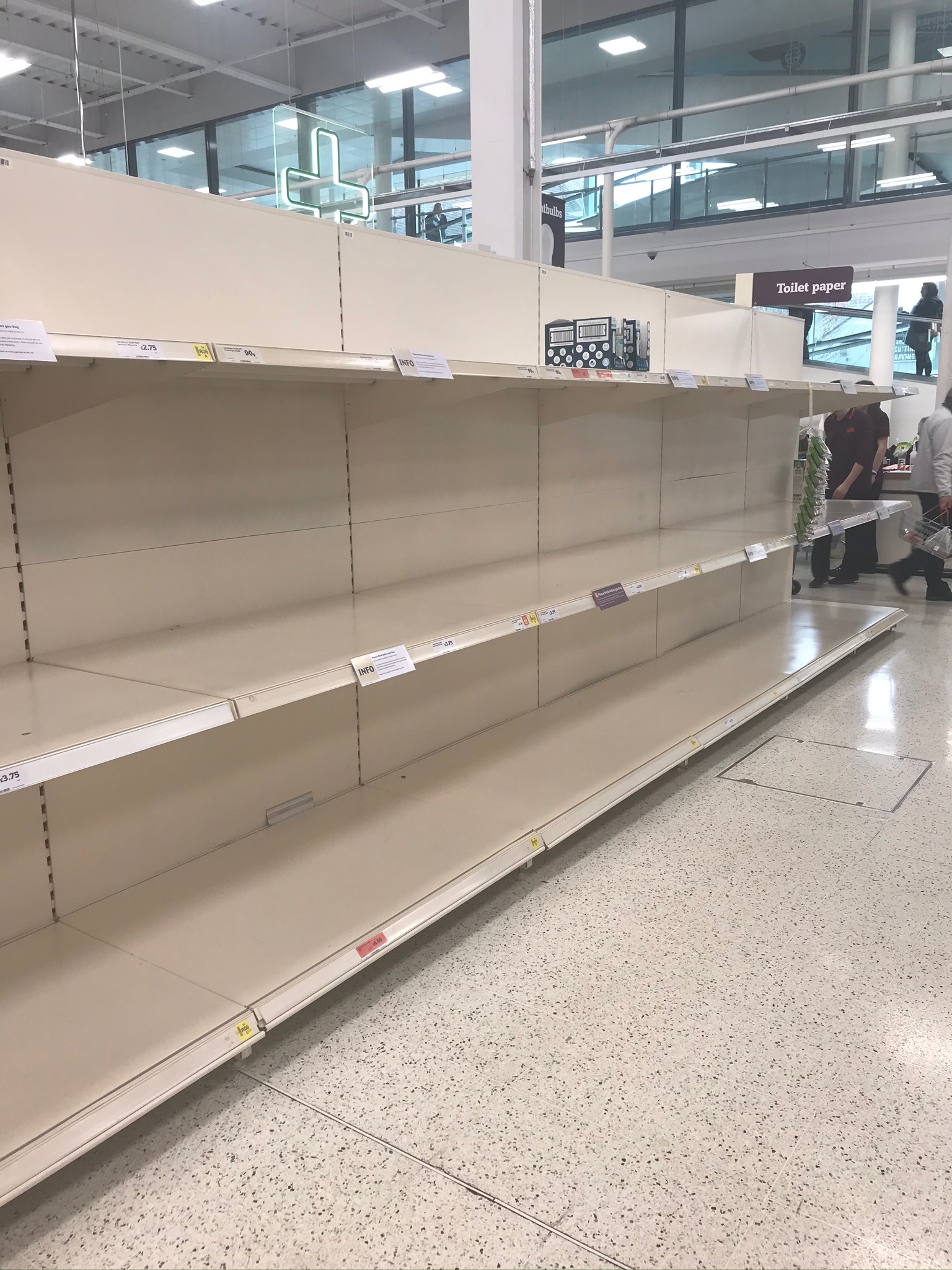 Along with the near-apocalyptic situation in the stores, I have also witnessed a great deal of kindness. In fact, my neighbour, aware that I’m expecting, messaged me to offer her own supplies and continued to check up on me.

And, while I’ve been asked whether I’m worried the added strain on the NHS will affect the care I get during pregnancy, I have to say that I’m not.

Perhaps it’s because I’m only four months along, but, at the moment, my main concern is for the elderly, and those at the frontline and working for the NHS. If a lockdown is enforced, I hope the midwife and scan appointments will still be safe.

However, I really feel for those suffering a more complicated pregnancy and unable to get the care they need, or who are close to their due date and face a potentially infected labour ward.

Asking to work from home

I had only just informed my boss of my pregnancy when an email went round telling us all that the elderly and pregnant should start working from home.

As soon as I saw the message, I spoke to HR. I can’t deny that I was relieved it wouldn’t be up to me to fight to be allowed to self-isolate: I didn’t want to be seen as hysterical.

To my employer’s credit, they were very supportive. However, I still felt guilty about all my colleagues who still had to go into the office (although, as the government has encouraged us all to practice social distancing, that has since changed).

I know that I am very lucky to be able to work from home. Because – as much cabin fever as that may be causing me right now – many others just don’t have that option.

Asking my partner to self-isolate

My next concern was the fact that my boyfriend was still expected to go into work, commuting into the city and potentially bringing germs back to the house.

I was fully prepared to demand he stay home, whether it made me sound like a crazed pregnant woman or not. However, his employers did that for me, well aware that if one person in the household is isolating, the whole house should.

Deciding whether to see friends and family

As the government is advising, rather than enforcing, their social distancing guidelines, it can make it a grey area when it comes to arguing with employers or telling friends you don’t feel comfortable meeting them.

Research seems to suggest coronavirus hasn’t been detrimental to pregnant women or newborn babies who have contracted it. However, in Germany there have been cases of deaths among young ‘healthy’ people.

Pregnant women are said to have a weaker immune system, so I’ve been stocking up on fruit and vegetables to boost my vitamin C intake. I’m finding it harder to stay active, though. And so, in an effort not to traumatise people who aren’t aware of my pregnancy by emerging from my quarantine as deathly pale and unhealthy-looking, I have been allowing myself walks in the park while I can. I consider them my daily ‘treat’.

Cabin fever has already settled in

Just a few days into my quarantine and I have to say I’ve been going pretty stir-crazy, so much so that it’s made me wary as to what to expect from my actual maternity leave when it rolls around.

After all, people say being a new mum can be pretty isolating. I guess, if this is a taste of that, I’ll be well-prepared.

Until then (although I hope quarantine won’t last that long) I’ll be making the most of adult colouring books, luxurious naps and binge-watching Narcos before I’m buried in nappies and baby sick.

You can find more advice on what to do if you’re pregnant during the coronavirus outbreak, visit the NHS website now.

Main image (Arren Mills/Unsplash) for illustrative purposes only. The person shown in the picture is a model, not the author.

All other images supplied by author.