Stella Moris didn’t know who she was meeting one February 2011 day, let alone that it would be life- changing.

“He was sitting at the table alone and looked kind of surprised because there was no one there and suddenly this stranger rocks up,” she says, describing her new acquaintance.

“I was there in a professional context. [But] what I felt was that I was meeting a very special person. It wasn’t someone you meet every day.”

The white-haired stranger waiting on his own for the human rights lawyer and activist, there that day only a few blocks down the road from where she’s sat now, in a bid to join his legal team, was Julian Assange.

Eleven years ago the Townsville-born computer hacker, editor and publisher was fighting extradition to Sweden over sexual assault claims after exposing US war crimes in Afghanistan and Iraq and releasing thousands of diplomatic cables through WikiLeaks, but still had rock-star status.

Now Moris’ fiance and the father of her two children, Assange languishes in Britain’s harshest prison, Belmarsh, having fallen out with the mainstream media outlets he’d collaborated with. Moris continues to beg the Australian government to intervene in his case to save his life.

They are preparing to marry at the prison on March 23, after previously threatening to take legal action against Britain’s justice secretary, who had earlier banned their nuptials. Four guests will be allowed to attend and fashion designer Vivienne Westwood – a staunch supporter of Assange’s – is designing a wedding dress for Moris and a kilt for Assange.

In December, a UK court ruled that Assange, 50, can be sent to the US, where he faces 175 years in jail on 17 charges under the Espionage Act, overturning an earlier UK judgement. In January, the whistleblower was given permission to go to the country’s supreme court to challenge the move but it was denied on Tuesday on the grounds that his application did not raise “an arguable point of law”. The case is likely to drag on for much longer, with activists warning it could set a chilling precedent for press freedom.

“Keeping Julian in prison will kill him eventually,” Moris, speaking at the Frontline Club, an independent journalist’s hub in west London where Assange held press conferences and hid out, tells The Sydney Morning Herald and The Age. “The Australian government should be saying [to the US] ‘he’s our citizen, this has gone on for too long. It’s harming our credibility, politically. We’re getting a lot of flak over this issue. It would be helpful if you drop this’.”

Sara Gonzalez Devant, as Moris was known until she changed her name in 2012 from safety concerns, was raised by fighters. Her mother is from Spain and grew up during the era of Francisco Franco, “politicised by force from early on, living under a dictatorship”. She later became a theatre director.

Moris’ Swedish father was a town planner and architect. His work took the family to Botswana and Lesotho, where she went to school, in southern Africa. During apartheid’s height, when South Africans were leaving their country in disgust or being hunted down, the couple belonged to the Medu Art Ensemble, a troupe of politically aware artists in neighbouring Botswana.

In 1985, just a few weeks before the family left the country, there was a cross-border night raid and South African authorities assassinated 12 people, including 10 members of the group. One, a painter, was a dear family friend who had been living with Moris and her parents, eight kilometres from the border, in Botswana’s capital Gaborone, for about three years.

“That whole period really shaped my parents’ lives in their 20s and 30s,” says Moris.

“Losing these friends was a big reference point in my upbringing, even though I was 2½ when we left Botswana.”

The family moved to Europe when Moris was eight and in 2002 she went to Britain. Her human rights passion later took her to East Timor, the topic of her master’s dissertation and where she worked for the UN in 2005, when a truth commission set up by the country and Indonesia opened. But it was through her studies in law and politics and refugee law, in Britain and Spain, that she discovered non-profit media organisation WikiLeaks, launched by Assange in 2006.

It continues to operate, although Moris laments that many stories haven’t been published because its founder remains behind bars. “It’s shocking some journalists just starting their careers now have no idea what a resource WikiLeaks is,” she says.

Given the media interest in him then, Assange thought Moris was a US journalist sent to interview him on the day they first came into contact. Moris had actually applied to be a researcher on his extradition case. Assange vehemently denied allegations that he’d sexually assaulted two women in Sweden in August 2010. Sweden shelved its investigation in 2019.

“It was this confusing situation,” says Moris, of their meeting, organised through his Australian lawyer Jennifer Robinson.

“I had no expectation that I would be meeting Julian on that day,” she says, adding that she “found him attractive as a man and all these things, but that wasn’t the most significant [thing].

“The impressions of Julian as I got to know him were that he was a very rare creature,” says Moris. “He just has that aura which I later fell in love with.” With an olive complexion, she has dark hair and eyes to match that you can’t turn away from.

After Assange took up asylum in the Ecuadorian embassy in April 2012, the fluent Spanish speaker was spending nearly every day there. Moris become a fixer of sorts for Assange and its staff. By 2015 the pair had formed a romantic attachment.

“He is very funny,” says Moris. “We laugh a lot. I never get bored of speaking to him because he sees things from so many different perspectives. [Julian’s] fascinating as a person.”

Their engagement came in 2017. Given the sensitivities around their relationship, it didn’t emerge until April 2020 that the pair had conceived Gabriel, then aged two, and Max, then one, while the hacktivist had been residing in the embassy. The couple had erected tents in the property, with Moris wearing layers of clothing to disguise her pregnancy bumps.

She introduced herself to the world that month in a WikiLeaks video in which she cuddled the boys and showed off baby photos. “While for many people it would seem insane to start a family in that context, for us it was the sane thing to do, to keep things real,” says Moris in the clip. She compares her situation to a “war zone”. “Falling in love is kind of an act of rebellion in a context where there’s a lot of attempts to destroy your life and your reasons for doing what you’re doing,” adds the lawyer.

A prison guard warned her that US intelligence had attempted to steal DNA from a nappy of Gabriel’s, who Assange watched being born through video link. Moris realised she couldn’t take her eldest son to the embassy any more. While pregnant with Max she realised she could no longer safely visit it.

Assange was dramatically arrested after seven years living there and hauled off to Belmarsh nearly three years ago. Today Moris, 39, relies on her mother and brother for child care help.

“But I can’t keep that up,” she says. “My dad is very elderly, so my mum has to be with him. The situation is constantly changing. It’s just … try to manage whatever comes up.” 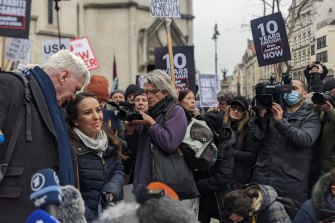 During Britain’s COVID lockdowns, the couple didn’t see each other for several months but were able to talk. Assange wasn’t able to hug Gabriel – now four and bearing a striking resemblance to his father according to Moris – and Max, three, for over a year.

“When he could, it was this huge thing,” she says. Moris explains that her partner is “fascinated by knowledge and by exploring knowledge and ideas, and one of the things he loves about being with the kids is how they learn”.

She says that “when you start experiencing restrictions on your life…the small things become everything”.

“You’re thankful for being able to hold his hand – something like this becomes enormous,” says Moris.

They’re now limited to one or two weekly visits.

“You adapt,” says Moris. “But when you look at it objectively, it’s just completely outrageous. It’s horrific – he’s alone in his cell for over 20 hours a day.” She says Assange cannot properly receive mail.

In October Assange, who has Asperger’s syndrome, suffered a mini-stroke. Independent doctors have warned it could be a precursor for something much more devastating.

“I’m really worried that [Julian] is deteriorating to such a degree that the damage will be irreversible.”

The UK’s High Court late last year overturned a January 2021 ruling that the Australian was at risk of taking his own life and could not be sent to the United States, adding that assurances by the US that Assange would not be held in solitary confinement and could serve his sentence in Australia if convicted had been guaranteed.

In a February 18 briefing with journalists, Nils Melzer, the UN Special Rapporteur on Torture and other cruel, inhuman or degrading treatment or punishment, said that Assange had not committed any serious crime and there was no legal basis for his incarceration. But he was “not very optimistic” that he’d be freed through British courts.

Assange’s plight has captured the attention of figures around the world from Pamela Anderson to Deputy Prime Minister Barnaby Joyce, who in December through the Herald and The Age called for Assange to be tried in the UK or brought home. In a recent poll conducted by this masthead, 71 per cent of people supported calls for Assange, who has won dozens of journalism prizes including a Walkley award, to be released to Australia.

A transient who grew up in the bush, Moris says that Assange loves hiking and misses nature.

“I want the kids to see Australia but I want them to have their father showing them Australia. They’re Australian.”

She is in the process of sorting out their Australian citizenship for the country, which they have a huge map of on a wall at home. Max also has a much-treasured plastic cup with a koala on it.

“One of (the boys’) favourite films on Netflix is called Back to the Outback,” says Moris. “They have to get to know Australia.”

It may not be realistic, but making plans beyond the confines of Belmarsh prison is a way of coping, says Moris.

“It’s fine to be in the moment,” she says. “But you also have to think beyond the moment and to remind ourselves and each other this is temporary and that he will be free someday, and to imagine what that might be like.”

Make the most of your health, relationships, fitness and nutrition with our Live Well newsletter. Get it in your inbox every Monday.

Most Viewed in Lifestyle