Millions of people in Indonesia could be at risk from a devastating tsunami triggered by an underwater landslide, scientists claim

Some parts of Indonesia that do not have early warning systems in place for earthquakes could be at increased risk of tsunamis, according to a new study.

Analysis of more than 2.5million years’ worth of geological data revealed 19 enormous ancient underwater landslides around the island nation.

The submarine landslides happened, on average, once every 160,000 years.

Should one of these events happen in the modern world, the most at-risk locations would be the cities of Balikpapan and Samarinda, with a combined population of over 1.6 million people. 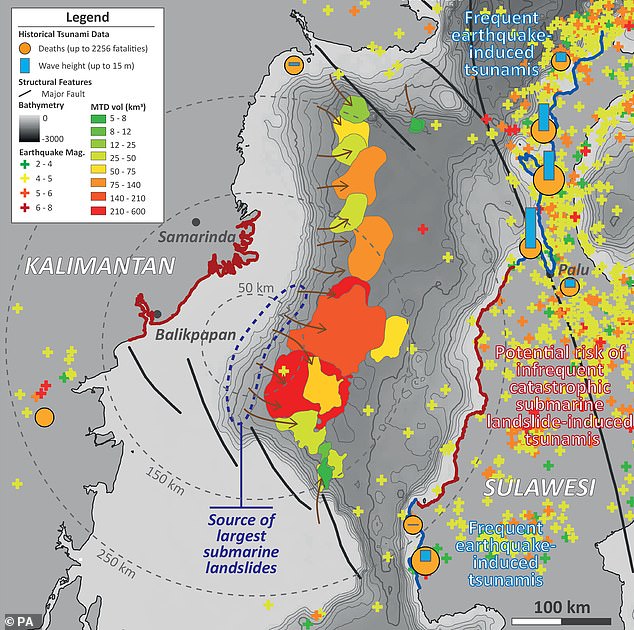 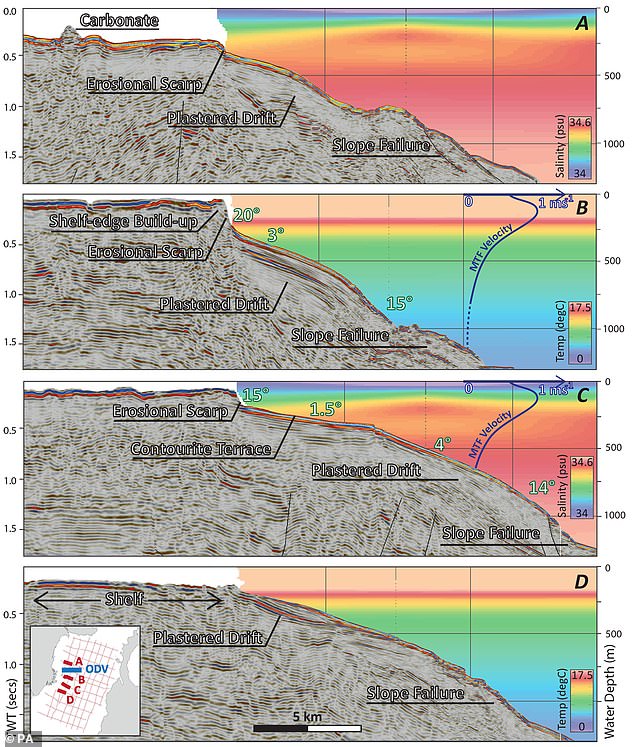 Analysis of more than 2.5million years worth of geological data revealed 19 enormous ancient underwater landlisdes around the island nation

The research team, led by Heriot-Watt University in Edinburgh, said the findings suggest coastal communities in the country without tsunami warning or mitigation systems could be at risk from tsunamis generated by similar landslides.

Researcher Rachel Brackenridge said: ‘The largest of the landslides comprised 600 kilometres cubed of sediment, while the smallest we identified were five kilometres cubed.’

The debris produced by the largest landslides identified would fill Sydney harbour 1,000 times over.

She said: ‘We can see a layered and orderly seabed, then there are huge bodies of sediment that appear chaotic.

‘We can tell from the internal characteristics that these sediments have spilled down a slope in a rapid, turbulent manner.

Areas at risk include the proposed site for the new Indonesian capital on the island of Borneo.

More than 4,000 people across the country have died in the past two years alone from the Palu Bay and Anak Krakatau tsunamis.

The epicentre of the 2004 Boxing Day tsunami that killed around 230,000 people in several different countries was off the coast the Indonesian island of Sumatra, and the nation was the worst affected.

Uisdean Nicholson, who led the research at Heriot-Watt University, said the landslides were a side-effect of a strong current through the strait. 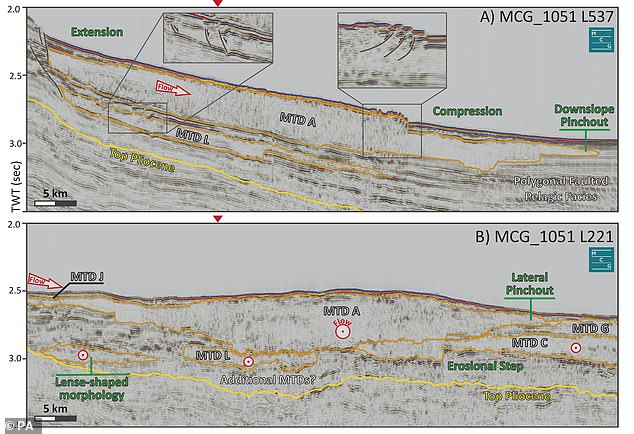 Researchers from Heriot-Watt University mapped underneath the seabed using seismic data. They found a layered and orderly seabed, then there are huge bodies of sediment that appear chaotic  (pictured)

He explains: ‘The current acts as a conveyor belt, transporting sediment from the Mahakam Delta and dumping it on the upper continental slope to the south, making the seabed steeper, weaker and more likely to collapse.

‘We estimate the largest, tsunamigenic events – those that displace 100 kilometres cubed – occurred every 500,000 years.

‘Indonesia has mitigation and early warning measures in place in different parts of the country but not the area that would be affected by a tsunami wave generated from these landslides.

‘This includes the cities of Balikpapan and Samarinda, which have a combined population of over 1.6 million people.’

He added: ‘Such an event could be concentrated and amplified by Balikpapan Bay, the site selected for the new capital city of Indonesia.

‘Our next step is to quantify the risk in this area by building various numerical models of landslide events and tsunami generation.

‘This could help us predict a threshold size that causes dangerous tsunamis and help inform any mitigation strategies.’

The British Geological Survey and University College London were also involved in the study, which was published in the Geological Society London publication Submarine Mass Movements and Their Consequences.