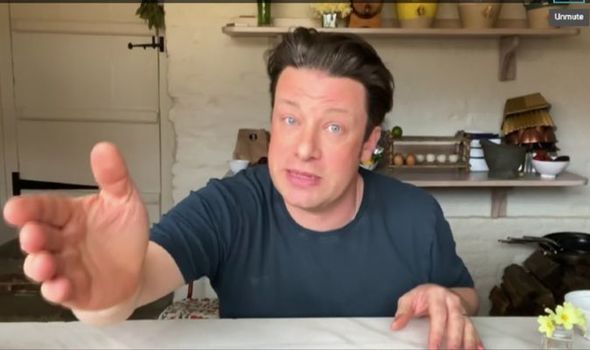 Jamie Oliver filmed tonight’s recipes from his house with the help of wife Jules, who was filming the show. He showed fans how to cook and easy, yet impressive breakfast.

Jamie put one rasher of smokey bacon each and four chipolatas into a pan on a medium head.

He said: “I’d normally have the mushrooms and go to town, but I haven’t got any mushrooms today.

“This is using eggs which were hard to get last week.”

Going on he added: “We are using the eggs to create an edible frisbee, so when you put it on the plate everyone says wow.”

He advised to start in the pan with the thing that takes the longest amount of cooking.

Once the bacon and chipolatas are cooked they are put on the side.

Then a few tomatoes are cooked on the same pan on a low heat, cooking in the fat from the meat.

The chef then cracks four eggs onto the pan in a low heat, encourgaing the white to cook together.

He then put the bacon back on the plate in pieces, and slices the sausages and does the same.

He then out a lid on the pan, helping to cook the eggs through a little more. After a few minutes this can be served up among the family.

“This was invented for a hangover,” Jamie admitted.

He recommend other toppings including prosciutto, olives, basil, parmesan or mozzarella could also be added.

The chef serves it up with hot bread or toast and brown sauce of ketchup.

Jamie also recommended one his older recipes “Allotment Cottage Pie”. He said you can put whatever you like in there. Jamie’s version has suede, celeriac cooked in a flavoured oil.

He mixed tikka paste with white fish in a bowl, putting in a heaped tablespoon. He rubbed the fillets with lemon and the paste, leaving the lemon zest.

Jamie then curried the veg with onions, garlic, coriander, ginger, and lemon zest. Nay veg can do in the curry. 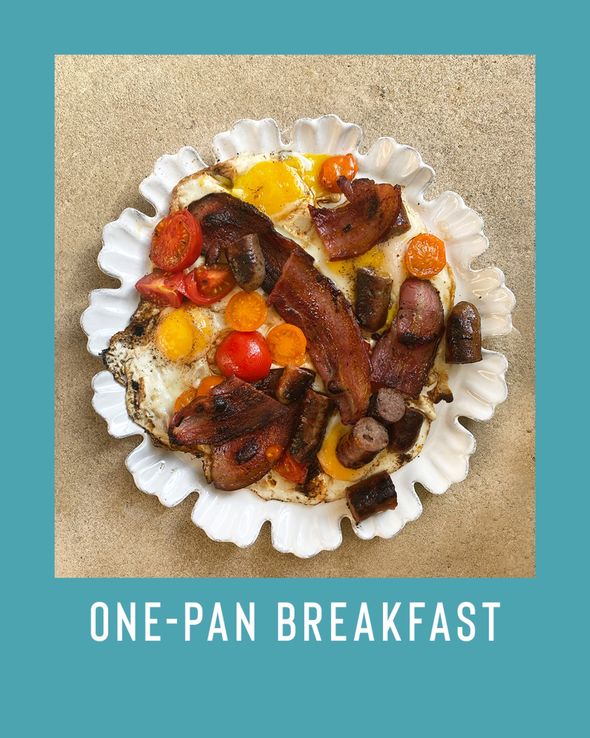 Earlier, Jamie issued an important warning to shoppers amid the coronavirus crisis.

The chef revealed looking to other places for food products could be a good idea.

He said: “This is an opportunity to remember that we are leaning a lot on the supermarkets, but we should really try and use our fishmongers, our butchers and our smaller stores.

“Their supply chain is very different. There is enough food in this country but we are leaning very heavily on the supermarkets, unusually so.

“All of the food that would usually be in schools, pubs and restaurants has to go somewhere.”