ENGLAND should still win the Third Test but they are being made to wait by a rejuvenated Indian batting line-up.

After rolling over India for a paltry 78 all out on day one, Joe Root and his bowlers encountered a different level of resistance and competence. 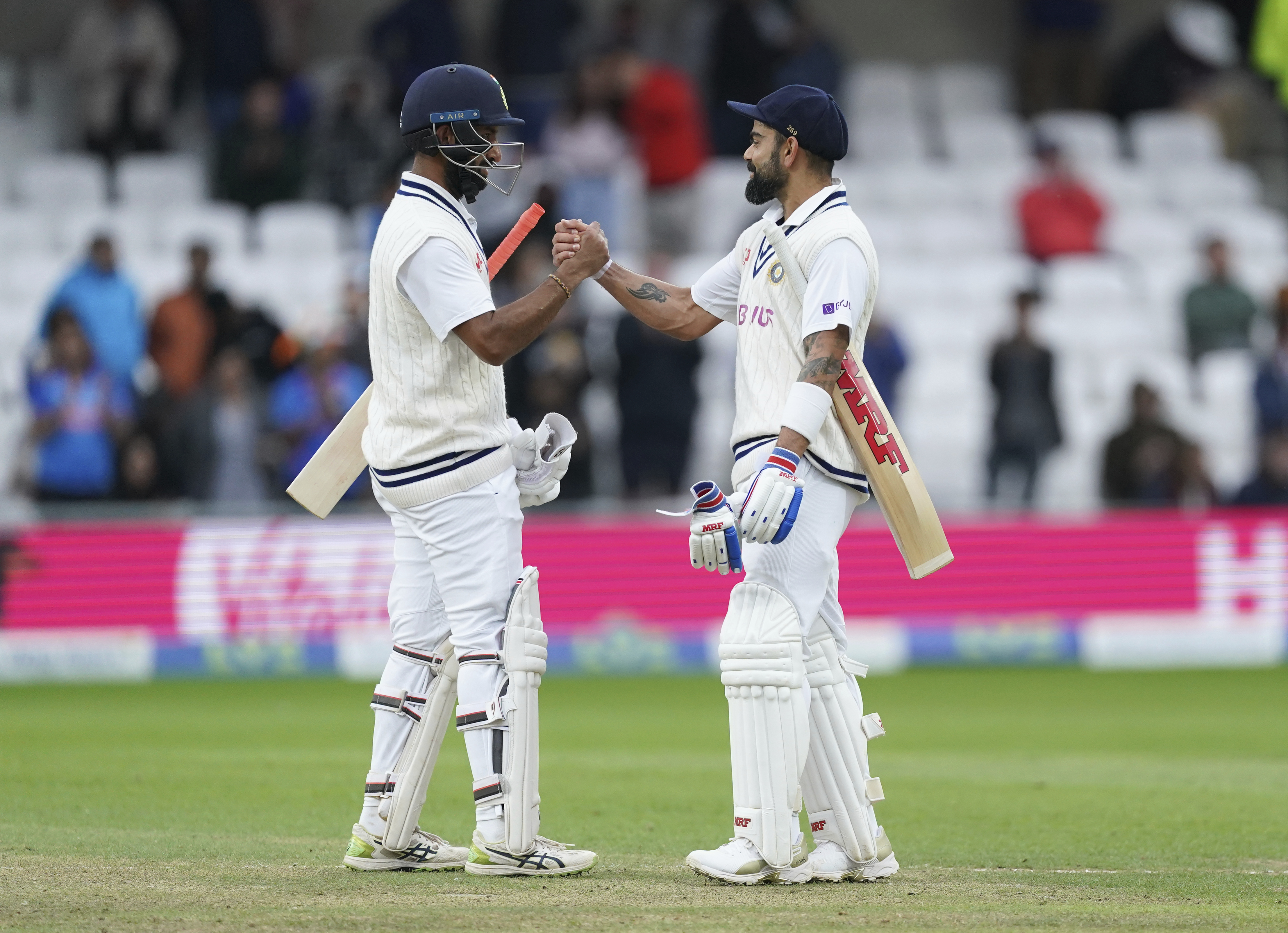 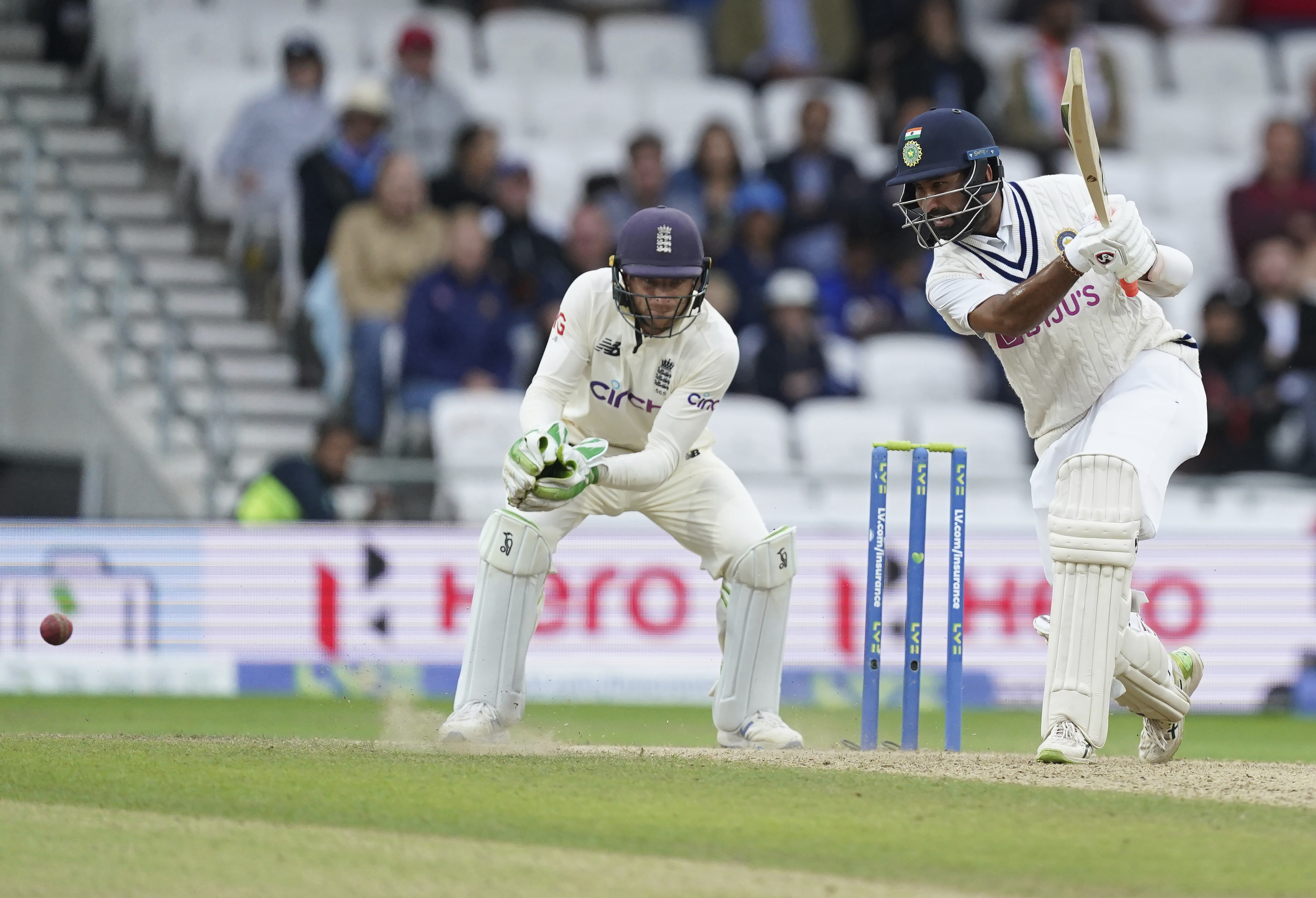 India laid the foundation of an epic rearguard by losing just two wickets in 80 overs and finished day three with 215-2 – still 139 runs behind England.

Cheteshwar Pujara is 91 not out, Rohit Sharma scored 59 and Virat Kohli is ominously poised on 45 not out, his best score of the series.

England know there will be plenty more graft and toil before they can hope to level the series at 1-1.

What a contrast to the opening day when the ball nipped and swung around, the edges were taken and the wickets crashed.

This time, there was still plenty of help for the bowlers but edges rarely came and India applied themselves with resilience and no little skill.

All-rounder Craig Overton, who dismissed opener K.L.Rahul, his fourth wicket of his first Test for two years, said: “We knew they’d fight, we know what their character is like. Credit to the Indian batsmen, they made it hard for us.

“I think we bowled better than two wickets would suggest. We could have taken four or five but we’re still in a great position, especially with the new ball due in the morning.

“We’ll be hunting to try to get them out but maybe in a different way to how they go about things. We must stick to how we work best.

“I think Kohli is one of those characters who wants to get in a battle. We won’t ignore him but must make sure we stick to the basics.”

With Jimmy Anderson below his normal best and Sam Curran largely ineffective, there was a big onus on Overton and Ollie Robinson, playing just his fourth Test.

But it was just one of those days when the ball tended to beat the bat rather than take the edge.

After several months without a big score and being under big pressure, Pujara batted superbly while Rohit was as calm and unhurried as ever.

England would have had Rohit lbw for 39 but Root asked for a review just a moment after the permitted 15 seconds.

Kohli has been second-best in his duel with Anderson so far this summer but Anderson could not bowl at him immediately because he had been off the field.

Credit to the Indian batsmen, they made it hard for us.

And, when the Lancashire swinger did come into the attack, he sent down two wayward overs for 20 runs and exited with a grump and a groan.

Overton and Robinson were quickly dismissed in the morning and England’s first innings was wrapped up for 432.

Opener Rahul was given out lbw by umpire Richard Kettleborough for six. It looked a good decision but DRS showed the ball to be missing the stumps.

Rahul could not capitalise significantly on his reprieve and, from the final ball before lunch, edged Overton into the slips.

The ball was heading towards Root at first slip but Jonny Bairstow thrust out his left hand at second slip and clung onto a fine catch. Bairstow lay on his back, his arms wide, in a near-Paul Gascoigne dentist’s chair celebration. Although nobody squirted anything into his mouth.

The ball was doing plenty but India didn’t lose a wicket in the afternoon session as Rohit and Pujara applied themselves and enjoyed a few slices of luck with plays and misses.

Rohit didn’t last long after tea, however, when this time Kettleborough raised his finger for an lbw.

Rohit reviewed and ball-tracking showed it was just feathering leg stump, so the batsman had to depart.

The same spectator who walked onto the field pretending to be part of the Indian team at Lord’s suddenly emerged from the crowd at the fall of Rohit’s wicket with a bat and wearing whites, pads, helmet and gloves.

Jokes are rarely as funny second time around. He was dragged off by security guards and with a few fleas in his ear from the England players.

Pujara and Kohli remained together until the close with Root having to bowl himself and Moeen Ali for ten overs because the light was too gloomy for the quicker bowlers.