John Major and a sickening final insult to victims like my father: As former Prime Minister says tainted blood scandal that cost so many lives was just ‘bad luck’, victims’ advocate JASON EVANS hits back

Many people see Sir John Major as a ‘nice’ ex-PM, perhaps short on ideology and charisma, but a decent man who did his best.

On Monday, however, a different side of Sir John emerged when he gave evidence to the inquiry into the infected blood scandal of the 1970s and 80s, to a room full of victims and their relatives. It was the worst treatment disaster in the NHS’s history.

It was a scandal that killed more than 2,000 innocent people, including my father, Jonathan Evans.

Yet Major told the inquiry that what had happened to these victims amounted to ‘incredibly bad luck’.

Understandably, his remark was greeted with gasps of shock from those in the room — myself included. For it revealed not only shocking ignorance, but also breathtaking callousness.

Let me be clear: luck had nothing to do with it.

The deaths and suffering of thousands of people were caused by negligence on the part of the state, which then refused to take responsibility, and failed to offer victims and their families the compassion they needed and the compensation they so desperately deserved.

Later, Major offered what he framed as an apology: ‘It wasn’t intended to be offensive . . . what I meant was . . . by sheer bad luck, it was a random sample.’

There was nothing random about it. The deaths were the direct result of treatment given to 5,000 haemophiliacs that continued to be given long after the alarm had been raised over its potential dangers. Treatment that, far from improving patients’ quality of life, sentenced some to death and left others with severe illnesses as they contracted Hepatitis C and HIV from infected blood products.

For three decades, patients and their families have fought desperately for answers. But politicians, civil servants and health officials have repeatedly tried to fob us off, fearing that admission of guilt will result in costly compensation or damage to their careers.

Now, with the inquiry — which began in 2018 — we at last have the chance to get answers. So it is devastating when a former Prime Minister dismisses decades of suffering as ‘bad luck’.

This saga of incompetence, lies and cover-up began in the mid-1970s. Until then, haemophiliacs had been treated with a blood-clotting agent called cryoprecipitate, made from blood plasma. Like a regular blood transfusion, it relied on voluntary donations given through the NHS. 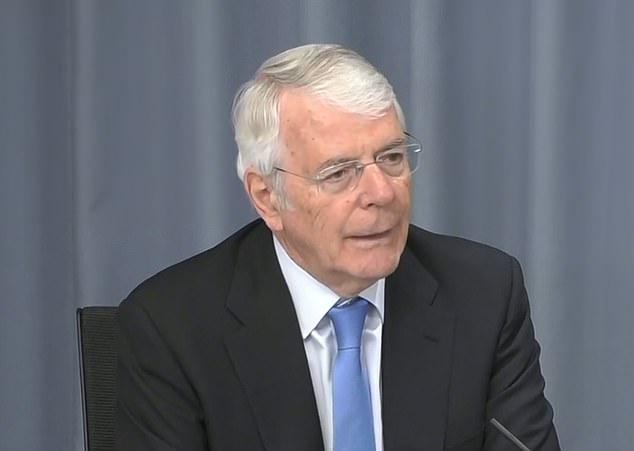 A letter the former Prime Minister wrote warned that a sympathetic response to the infected blood products victims ‘could lead to an open-ended commitment of huge dimensions’ Pictured: John Major gives evidence at the Infected Blood enquiry in London

But then came the new treatment, Factor VIII, using blood plasma collected from tens of thousands of donors. If just one donation was infected, it contaminated the whole batch.

In Britain, blood donors were then, and are still, not allowed to be paid, but the plasma used for Factor VIII, manufactured in the U.S. and other countries, was often paid for.

Plasma collectors set up centres in poor, ‘skid-row’ locations, and — as they paid for donations in cash — attracted intravenous drug users and sex workers, who were more likely to carry viral infections. There were even Pay-for-Plasma operations in U.S. prisons where higher viral-risk activity, such as unprotected sex and needle-sharing, were common and the incidence of HIV and Hepatitis C was high.

As there was no screening of the blood collected from such locations, there was nothing to prevent infected supplies entering the system.

Despite being warned to withdraw the products from use by the UK’s most senior epidemiologist, Dr Spence Galbraith, in early 1983, Britain continued to buy them and give them to people such as my father.

In mid-1983, haemophiliacs started being diagnosed with Aids in Britain, but the inquiry has seen evidence that some clinicians suppressed this information and down-played the risks. Galbraith’s warnings were ignored and the state kept importing large quantities of lethal Factor VIII and continued to administer it.

At Treloar College, a school in Surrey for disabled children, haemophiliac boys were given the new clotting treatment without any warning of the high risk of contamination. Today, of the 89 boys treated at Treloar, fewer than a quarter are alive.

Shockingly, there were often long delays between a diagnosis of Hepatitis C or HIV and the terrible news being conveyed to patients, putting wives and partners at risk.

This was the case with my father. Like all young couples on their wedding day, he and my mother were blissfully happy when they married in 1984. At first, Dad’s haemophilia did not hold him back. His joints got stiff now and then from internal bleeding, but he lived an active life, working as a carpenter.

A year later, he was given the devastating news that he had HIV. It had been on his notes for six months by then. Thankfully my mother had not been infected.

My last memory of him dates back to 1993. Aged four, I was taken to see him as he lay dying, by which time he had been reduced to a skeleton. He died soon afterwards.

Even before his death, my mother was sacked from her job at a bakery because, as the manager said, they couldn’t have someone handling food whose husband had Aids.

My parents’ lives became hell. They received threatening phone calls and were shunned by neighbours.

It wasn’t until much later that I learned the truth: that my father was the victim of grotesque incompetence, negligence and cover-up as doctors, civil servants and eventually Government ministers tried to downplay the connection between Factor VIII and the number of haemophiliacs being infected with Hepatitis C and Aids. 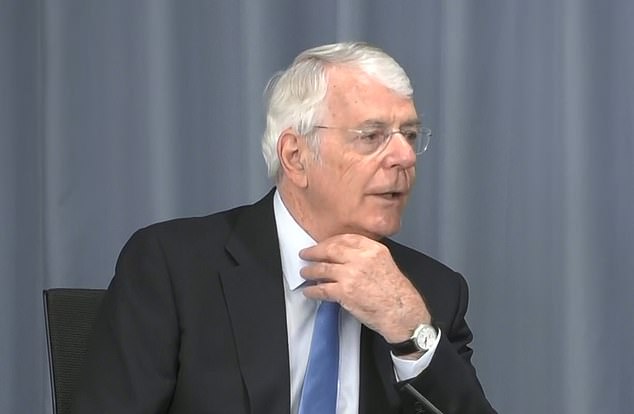 A new treatment called Factor VIII used blood plasma collected from tens of thousands of donors but f just one donation was infected, it contaminated the whole batch Pictured: John Major gives evidence at the Infected Blood enquiry in London

By 1987, John Major was Chief Secretary to the Treasury. On Monday, a letter written by him in November that year was read to the inquiry. It warned that a sympathetic response to the infected blood products victims ‘could lead to an open-ended commitment of huge dimensions’.

‘Might it not give rise to court action against the Government because of the implication of negligence?’ he said.

‘Have the law offices given a view on the possible consequences of a sympathetic response? I do not feel we can afford to offer such a response until the pros and cons have been thoroughly considered.’

It seems to me that these are the cold-hearted words of a politician keen to save the Treasury costs and win himself political capital. What about those devastated lives: children shrivelled to bags of bones, men like my dad dying in agony aged just 31? Were they just numbers on a spreadsheet?

What was more shocking than what Sir John said was what he did not say. Every witness is asked after giving evidence: ‘Is there anything you’d like to add?’

In this inquiry, several officials have taken the opportunity to acknowledge responsibility or express sympathy.

But when asked, Sir John said: ‘No, I think that’s it.’ If he had made a heartfelt apology, it wouldn’t have changed anything, but it would have helped us all psychologically. Yet he neither apologised nor expressed sincere sympathy.

It was a kick in the teeth for people who have waited 30 years. All I can hope is that the inquiry delivers the answers, and compensation, so long delayed. But it will be no thanks to Sir John Major.

n Jason Evans is founder of Factor 8 (factor8scandal.uk), an advocacy organisation for victims of the infected blood scandal and their families.