Kim Kardashian West has spoken out publicly for the first time after husband Kanye West shared a series of erratic and concerning tweets earlier this week.

On Wednesday, the reality TV star shared an emotional Instagram Story where she talks candidly about the rapper’s “complicated and painful” life with bipolar disorder.

“I’ve never spoken publicly about how this has affected us at home because I am very protective of our children and Kanye’s right to privacy when it comes to his health,” she wrote, adding that she felt she should say something because “of the stigma and misconceptions about mental health.”

She said that she and her family are “powerless.” Since West is not a minor, he has to be the one to “engage in the process of getting help,” Kardashian West said. 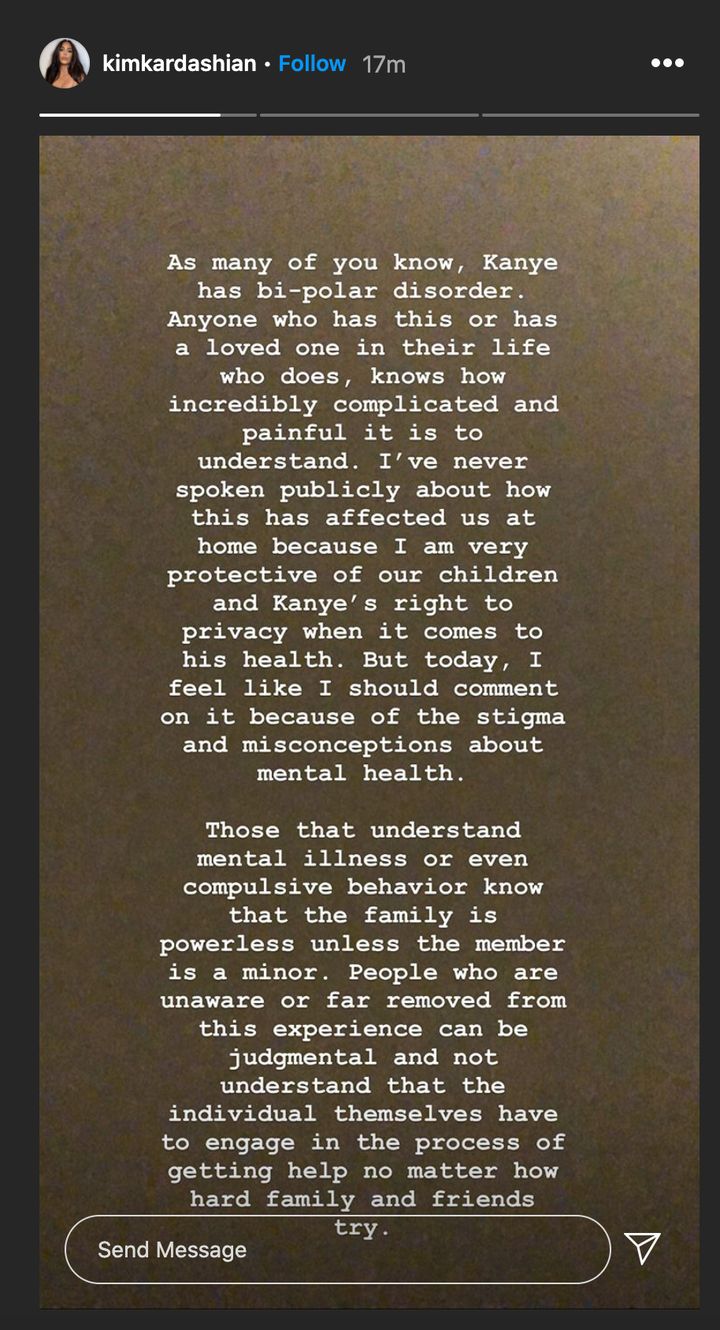 The 39-year-old went on to call West a “brilliant and complicated person” and said that his mental health struggles do not “diminish or invalidate his dreams and his creative ideas.”

She later implored the public to give her family “compassion and empathy” as they “get through this.” 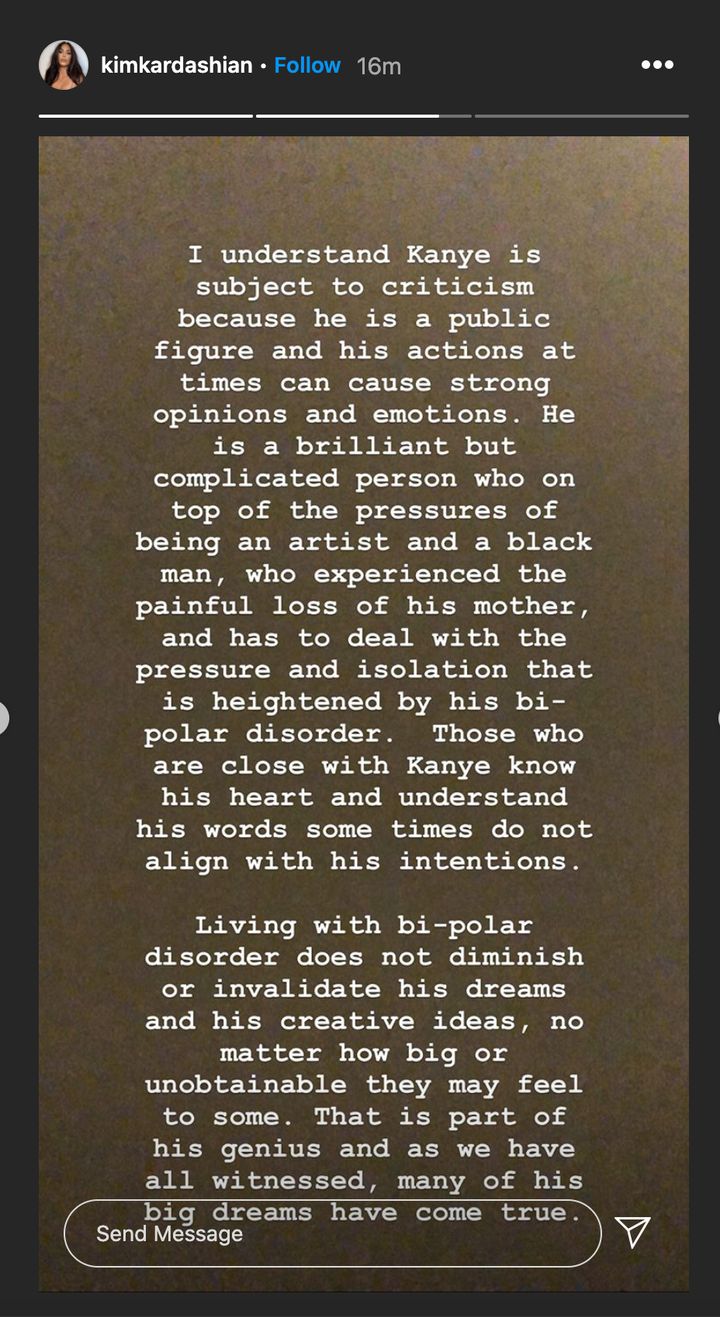 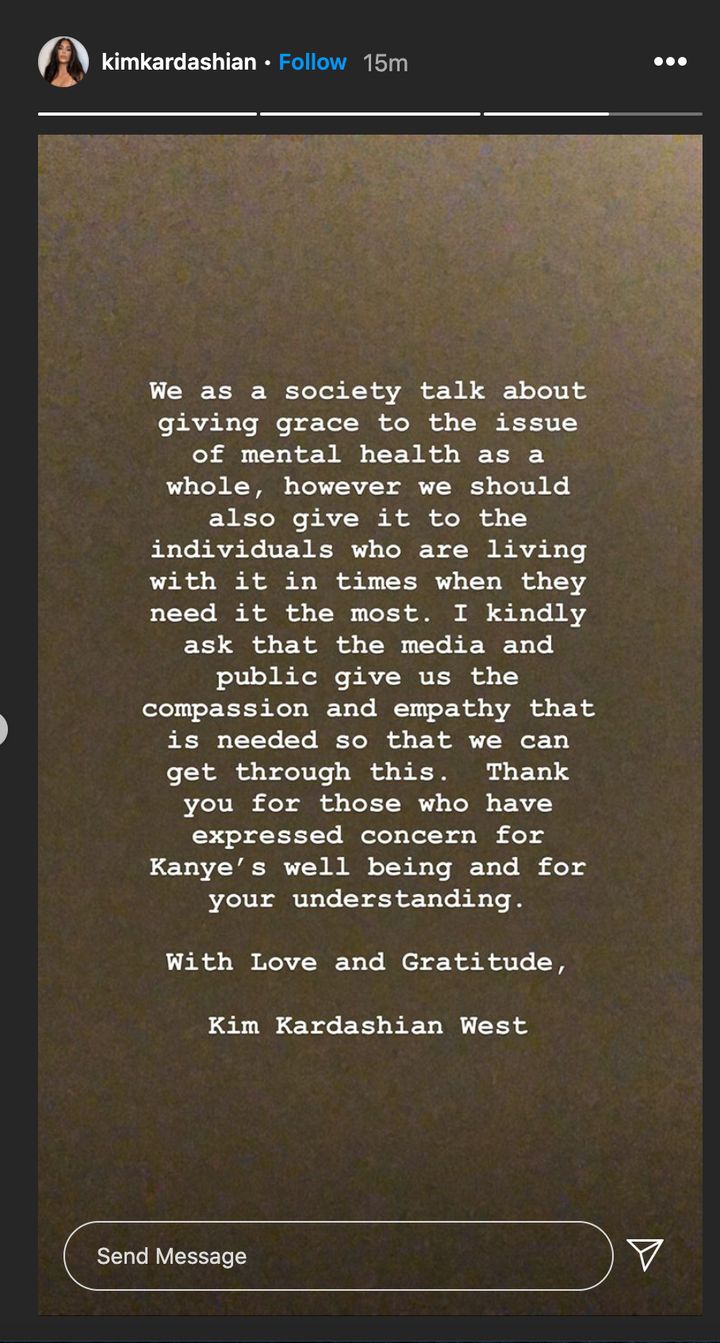 West shared a series of troubling tweets earlier this week, ranging from single words to seemingly nonsensical phrases. In addition to declaring that “NBC locked up Bill Cosby,” he also said that the movie “Get Out” is about his life and that “Kim was trying to fly to Wyoming with a doctor to lock me up.”

The rapper has been open about his life with bipolar disorder, talking candidly in an interview on David Letterman’s show “My Next Guest Needs No Introduction” last year after revealing in 2018 that he had been diagnosed with a “mental condition” at 39.

“If you don’t take medication every day to keep you at a certain state, you have a potential to ramp up and it can take you to a point where you can even end up in the hospital. And you start acting erratic, as TMZ would put it,” he said, explaining that “ramping up” — or experiencing an episode of psychosis — can mean he is “hyper-paranoid about everything.”

He went on to say that when that happens, it feels like the “government is putting chips in your head.”

“You feel you’re being recorded. You feel all these things. You have this moment [where] you feel everyone wants to kill you. You pretty much don’t trust anyone,” he said.

Over the last few years, West been at the center of much controversy for his public remarks. In addition to his feelings toward President Donald Trump, he also made headlines for calling slavery a “choice” and that voting based on your skin color is “mental slavery.”