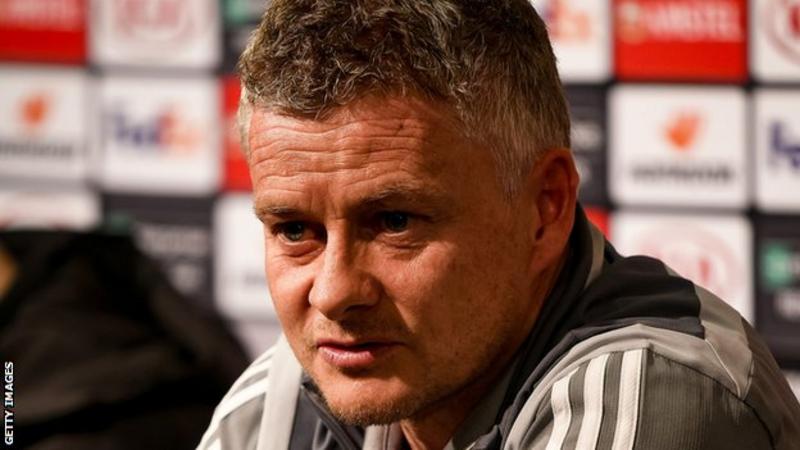 Manchester United manager Ole Gunnar Solskjaer says he will “understand” if the season is cut short because of coronavirus.

The disease has had an impact on sporting events across the world with United’s Europa League last-16 first leg at LASK among those affected.

The Austrian government has limited those who can attend Thursday’s game to 500 people.

“It’s up to the experts to decide,” Solskjaer said.

“I would understand yes, under the circumstances [if the season was to be cut short].

“The main concern must be the health of the general public and the decision that will be made we’ll back.”

A number of European club competition fixtures will be played behind closed doors this week, while the Europa League fixtures between Sevilla and Roma, and Inter Milan and Getafe, have been postponed.

“Of course, these are difficult circumstances – not just for football, but in the whole society,” Solskjaer added.

“For us, we just have to do what we’re told and get on with the game if the authorities think that’s what we should do. We are going to have to create our own atmosphere within the team, within the game.

“They are used to training with no spectators anyway and we do have some behind-closed-doors friendlies at times.

“I am in no doubt that my players are focused and ready to perform, even if there are no spectators there.”

United released a statement on Wednesday saying that once they return to Old Trafford “all home matches are currently scheduled to go ahead as planned”.

Solskjaer also added that none of his players had been tested for coronavirus and he was unaware of any plans to play the second leg against LASK behind closed doors in Manchester.

Odion Ighalo is likely to start up front for Manchester United, who will be without Anthony Martial, Paul Pogba and Marcus Rashford in Austria.

Forward Martial picked up an injury in the club’s Manchester derby win on Sunday, while midfielder Pogba has an ankle injury and Rashford has a back problem.

LASK will be without midfielder Thomas Goiginger, who suffered a serious knee injury in their Austrian Bundesliga win over Mattersburg on Sunday.