The Easter break looms as a major test of Sydney's reaction to the coronavirus lockdown, as opinions differ in popular beachside towns over whether enough is being done to keep holiday makers away.

Four weeks ago, Byron Bay residents Marc and Katie Wilson shut down their 180-bed Backpackers Holiday Village, and their five-bedroom bed and breakfast. 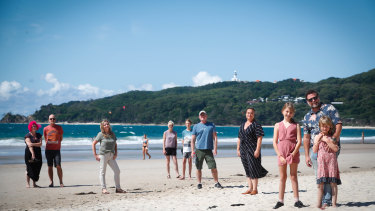 Byron Bay mayor Simon Richardson, his daughters Frida and Matilda with annoyed Byron residents who are worried about the health risks posed by visitors to their town. Credit:Danielle Smith.

Mr Wilson said he decided to act early and cease bookings despite the "huge strain" it put it on their businesses.

"I am at the front desk in the hostel, I check people in and out. The more I learnt about coronavirus, I decided to get my family, staff and guests in the safest place possible.

"Also, backpackers can get a bad rap in this town anyway. I didn't want that to happen now so that's why we took a stand."

Mrs Wilson said residents were worried an increase in visitors would "put our mayor in the position where he needs to close the beaches".

"There's plenty of space for us now. We need it for mental health and recreation. But, if visitors come, they could be less caring than locals and not heed to social distancing warnings," she said. 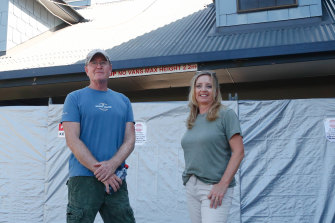 Marc and Katie Wilson who own the Backpackers Holiday Village in Byron Bay are urging visitors to stay away. Credit:Danielle Smith.

Byron Bay mayor Simon Richardson said people in his town were "dealing with … fear and confusion, even hysteria in some cases".

"People aren't at their best right now. We don't want locals to have to act as vigilantes, but all that could be avoided if those facilitating travel were shut down," Cr Richardson said.

He criticised the Transport for NSW website "still selling tickets to Byron for a hundred bucks" and singled out the popular accommodation website Airbnb for continuing to advertising bookings.

Australian College of Rural and Remote Medicine president Ewen McPhee, a GP in Emerald, Queensland, said, "The idea that you will be safer by taking yourself into a small community is magical thinking.

"If you have COVID-19 in the asymptomatic phase and take the virus into a rural community you may cause a crisis there and find yourself dying alone, unable to return home.

"Health services have a finite level of capability and that limit is more readily saturated in a country town than a city."

South Coast homeowner Peter, who didn't want his surname used "for fear of retribution" from angry residents, is planning to relocate from Sydney, and he was confident he could do so safely.

"I have a house in Sydney and the South Coast, so I am very lucky. I returned from overseas a couple of weeks ago and went into isolation in Sydney, because it made sense to stay there and not go driving to the coast where I normally live," Peter said.

"My plan is, once I'm finished with isolation and I know I'm clear [of coronavirus], I will relocate to the coast. I am watching the advice as it comes out, but it's quite difficult to keep up with what's an announcement and what's opinion."

Peter said he would follow the advice listed on the NSW public health order website, which says people can "move to a new place of residence, or between your different places of residence".

Copacabana resident John, who also declined to use his surname fearing a backlash from his neighbours on the Central Coast, said there were a "fair few people coming up here, and we have a lot of locals who are cranky about it, and others who are realistic".

John said he was concerned about the "real vigilante feel" in the area, and local Facebook groups were awash with photos of alleged social distancing breaches.

"If you own a house and pay rates, or even if you rent, if you want to come to a beach house, or even hire a house, as long as you do the right thing who cares where you're from?" John said.

NSW Tourism Minister Stuart Ayres told The Sun-Herald the message to Sydneysiders was very clear. "You are not allowed to travel for a holiday this Easter."

Mr Ayres said NSW's health order states "taking a holiday in a regional area is not a reasonable excuse" for travel. Individuals can be slugged for breaches with up to six months' imprisonment, or fines of up to $11,000.