Opposition Leader Matthew Guy has vowed to halve elective surgery waiting lists in a single term and ruled out any new taxes if the Coalition is elected at this year’s state election.

The Liberal and National parties announced their plans to “recover” and “rebuild” the state in a campaign pitch at a rally in Geelong on Sunday, pledging to no longer impose lockdowns, fix Victoria’s healthcare and mental health “crisis”, keep schools open, cut the cost of living and support businesses to recover and to employ more Victorians. 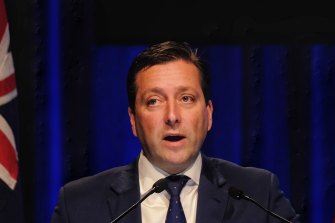 Evoking former US president Donald Trump’s 2016 election slogan, Mr Guy said he wanted to “make Victoria number one again”, in reference to the state suffering one of the world’s longest lockdowns and Melbourne losing its crown as the world’s most liveable city.

“This government is the worst government since the war,” Mr Guy said on Sunday morning. “The arrogance, the mismanagement, the lies, the corruption, we’ve all seen it.

“I’m here to tell every single Victorian [wherever] you live, what your background might be – you all matter to us, you’re all part of our recovery. We’re not here to pick winners and losers like the government does. We’re not here to scowl at people, lecture them, berate them like the Premier does. We want you to come with us, we want to solve your problems.”

Mr Guy reiterated his earlier comments that it was time for the state to move on from the COVID-19 pandemic and that mask rules, QR code check-in requirements and density quotients should be scrapped.

He also called for elective surgery to be immediately reinstated at 100 per cent capacity, and said a Guy government would hire 2500 extra mental health workers, predominantly based in schools, to address growing mental health problems among young people.

“We are going to fix this healthcare crisis that this government created; we will halve hospital waiting lists in our first term in office,” Mr Guy said.

“[Under] the Liberal Nationals Coalition government from November, there will be no new taxes in Victoria, and the money we do collect, we will spend it wisely because Victorians are sick of reading about cost blowouts: Metro Tunnel blown out, North East Link blown out, level crossing removals blown out; West Gate Tunnel blown out … this is a government that can’t touch a project without blowing it out.”

Victorians will head to the polls on November 26, with the latest Resolve Political Monitor showing support for the Labor government had lifted to near its highest level since the last election.

The Victorian poll, based on a survey of 1039 voters taken in November and January, found the state government’s primary vote increased to 41 per cent, up from 38 per cent in October last year.

Resolve does not calculate two-party-preferred results and there is a 3 per cent margin of error built into its state results, creating the potential for some volatility.

Deputy Nationals leader Steph Ryan told the rally at Geelong that Victoria was “broken” and the state could not afford another four years of the Labor Party. 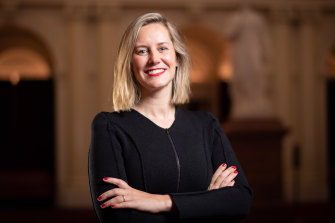 “The cost is just too great,” she said. “Those suffering in pain on endless hospital waiting lists … they need us to win. The small businesses that Matthew has met with and spoken to … who have been ruled by the uncertainty caused by lockdowns, they need us to win for them.

“The mums and dads who have watched their kids over the last couple of years suffering from stress, from fear, from anxiety as they have endured school closure after school closure, they need us to win for them.”

When asked about the opposition’s campaign event, Mr Andrews – who usually refuses to say anything more than “they’re irrelevant to my plans” – said: “I’ll leave the talk to others. We get on and build things.

“I’ll leave it to others to do the talking, and we’ll get on and do the building. That’s what Victorians voted for, and that’s what we’re all about.”