A married man who claims conversion therapy stopped him ‘longing’ for a homosexual relationship says he should be ‘celebrated’ in the same way as Philip Schofield.

Last month, Philip, 57, who shares two children with his wife of 27 years, emotionally revealed his sexuality in a lengthy social media post this month, before speaking about his sexuality to co-host and friend Holly Willoughby, 39, on This Morning.

Mike Davidson, from County Down, Northern Ireland, runs gay conversion charity Core Trust Issues and claims that while he ‘once longed’ for emotional, sexual and romantic relationship with a man, he ‘no longer’ has such feelings.

The father-of-two told NewsLetter how he is grateful to those who ‘helped him’ remain married to his wife for 41-years and believes there is an ‘appalling determination’ to promote LGBT’ ideology’ at the ‘expense of others’. 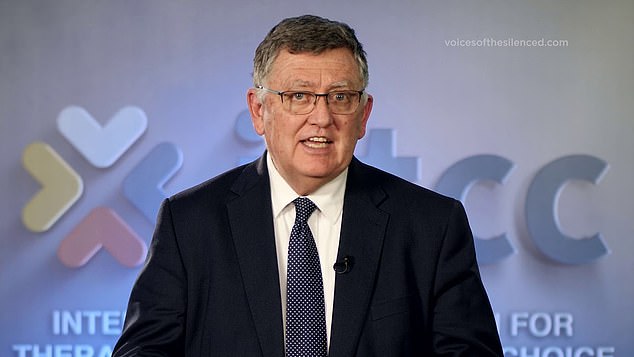 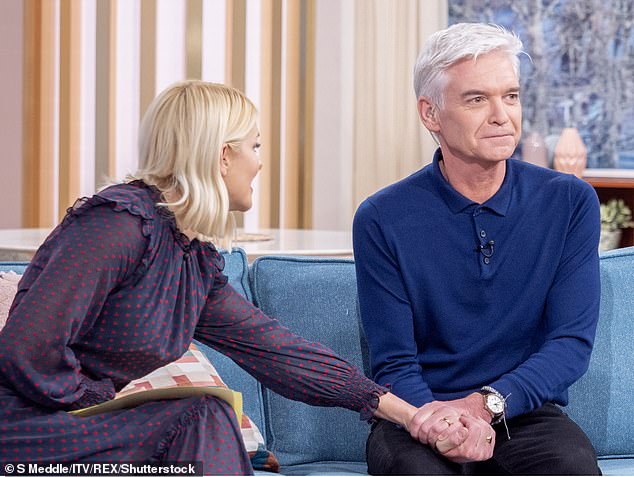 Last month, Philip (pictured right) spoke about his sexuality to co-host and friend Holly Willoughby (pictured left) , 39, on This Morning after coming out on social media 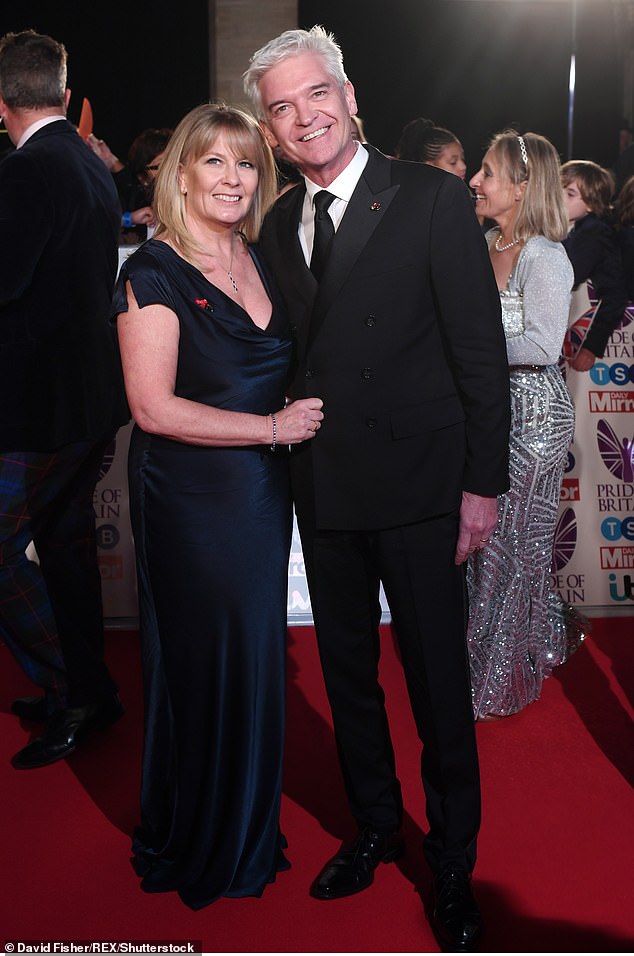 The presenter shares two children with his wife of 27 years Stephanie Lowe. They are pictured at the Pride of Britain Awards in 2017

He added: ‘There is an appalling determination to promote LGBT ideology at the expense of people’s lives.

‘If Philip Schofield is allowed to celebrate his choice, people who leave unwanted same-sex attractions should also be celebrated.’ 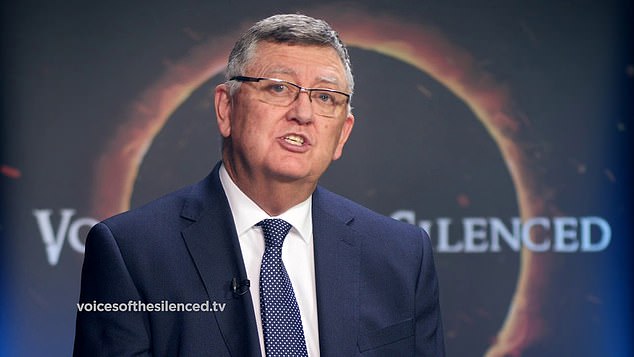 Davidson believes that homosexuality is not ‘hard wired’ and challenges the view that those who experience them in later life have simply repressed them.

Their mission statement says that while they ‘respect’ the rights of the gay community, they do not support gay marriage and think human sexuality is fluid for some, and ‘therefore changeable in some cases’.

He claims that his organisations are aimed at those who view homosexuality as a ‘threat’ to those who wish to remain a ‘faithful spouse’ or feel their home is the ‘best’ place raise their children.

Alleging that homosexual feelings are based on other unmet emotional needs, he insisted that clients ‘work to free themselves’ from changes in their ‘sexual patterning’. 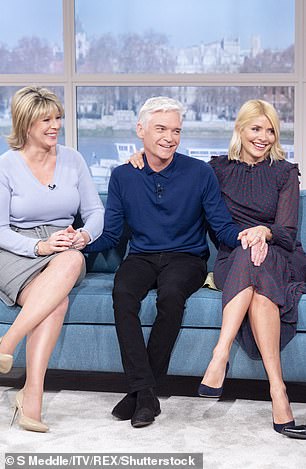 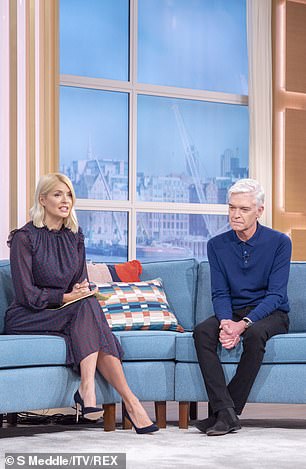 Last month, Philip, emotionally revealed his sexuality in a lengthy social media post this month, before speaking about his sexuality to co-host and friend Holly Willoughby, 39, on This Morning

Davidson himself feels his own homosexual feelings were  in part, because of a poor relationship with his father as a child.

Phillip previously told The Sun On Sunday that he does believe he’s known he was gay throughout his marriage to Stephanie, saying: ‘Whatever was ”there” I thought, ”OK, whatever this is, you stay back because I am happy.”

The veteran TV star added that he was ‘naive’ to think he could suppress his sexuality when he married Stephanie 27 years ago, but he didn’t consider his sexuality as it was such a ‘joyous time’ for him.

‘If you ask anyone who is gay, they know — there is no confusion.’

Phillip admitted he battled depression as he struggled with his sexuality, and even sought therapy to come to terms with it, before deciding he found it more helpful speaking to friends in private. 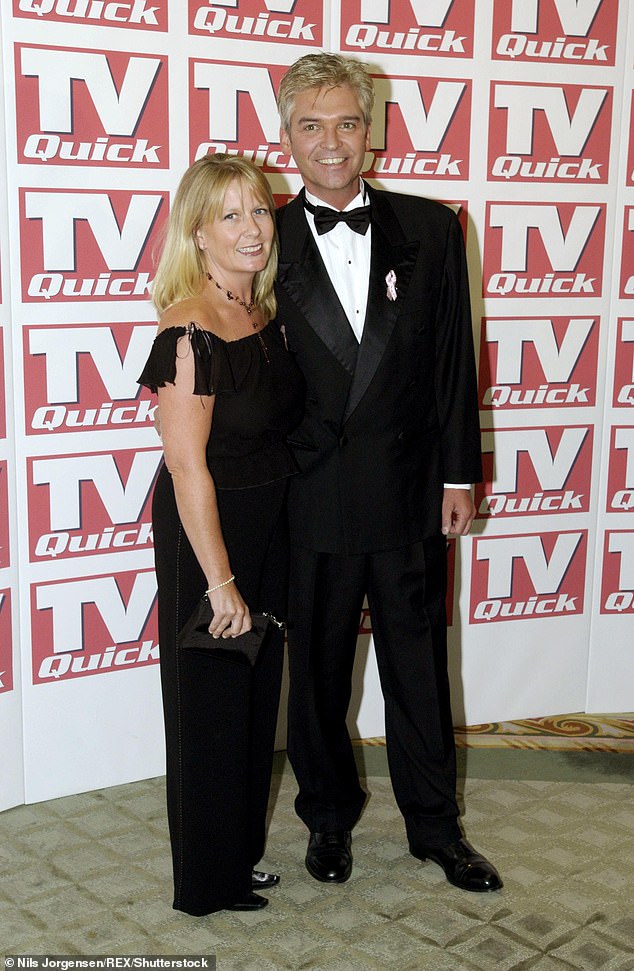 Phil previously admitted that he does believe he’s known he was gay throughout his marriage to Stephanie. They are pictured in 2003 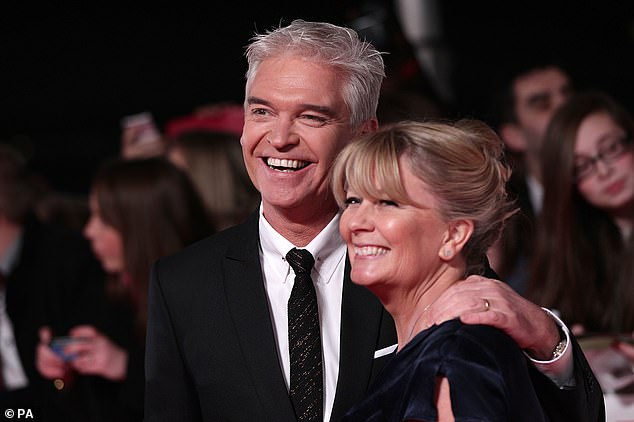 When asked about the future of his marriage to Stephanie, Phillip was unsure about whether they will divorce in the future. They are pictured in 2014

He admitted: ‘I went to seek professional help, I sat down and poured out my heart.’

Phillip added that the strain of keeping his sexuality a secret even took a toll on his physical health and his weight plummeted as he threw himself into work.

When asked about the future of his marriage to Stephanie, Phillip was unsure about whether they will divorce in the future, and declined to comment on whether he is in a relationship with a man or has been in the past.

Phillip also admitted that for a time he thought he was bisexual, and it took time for him to be honest with himself and accept that he was gay.

He added that the mental struggles have left him in tears on numerous occasions.

Phillip also highly praised his wife Stephanie for being such a supportive figure following his decision to come out, and explained that he finally spoke out to her after she and his two daughters noticed he had been ‘low’ in the previous months.

Amid the fallout around his decision to come out, Phillip insisted that he is still the same person that viewers see on their television every day, and wants to focus on the most important people in his life.

‘I have been coming to terms with the fact that I am gay’: Phillip’s statement in full

You never know what’s going on in someone’s seemingly perfect life, what issues they are struggling with, or the state of their wellbeing – and so you won’t know what has been consuming me for the last few years. With the strength and support of my wife and my daughters, I have been coming to terms with the fact that I am gay.

‘This is something that has caused many heart-breaking conversations at home. I have been married to Steph for nearly 27 years, and we have two beautiful grown-up daughters, Molly and Ruby…

‘My family have held me so close: they have tried to cheer me up, to smother me with kindness and love, despite their own confusion. Yet still I can’t sleep and there have been some very dark moments.

‘My inner conflict contrasts with an outside world that has changed so very much for the better. Today, quite rightly, being gay is a reason to celebrate and be proud. Yes, I am feeling pain and confusion, but that comes only from the hurt that I am causing to my family..

‘Steph has been incredible – I love her so very much. She is the kindest soul I have ever met. My girls have been astonishing in their love, hugs and encouraging words of comfort. Both mine and Steph’s entire families have stunned me with their love, instant acceptance and support.

‘Of course they are worried about Steph but I know they will scoop us both us.

‘My friends are the best, especially Holly, who has been so kind and wise – and who has hugged me as I sobbed on her shoulder. At ITV, I couldn’t hope to work with more wonderful, supportive teams…

‘Every day on This Morning, I sit in awe of those we meet who have been brave and open in confronting their truth – so now it’s my turn to share mine. This will probably all come as something and I understand, but only by facing this, by being honest, can I hope to find peace in my mind and a way forward. Please be kind, especially to my family. Phillip’.