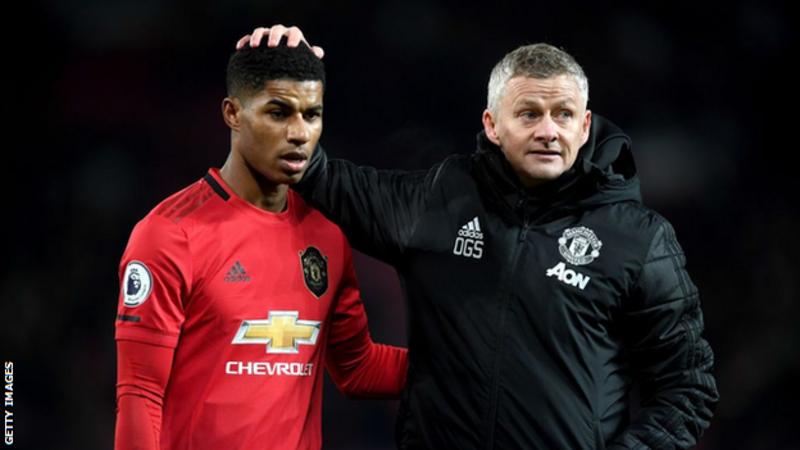 On Tuesday, the government extended a free school meals scheme outside term time after Rashford wrote to MPs.

It will benefit about 1.3m children in England.

“He has changed the lives of so many kids this summer,” said Solskjaer.

“That is more important than any game of football he could play.”

Solskjaer has watched with pride at the way 22-year-old England forward Rashford has kept pushing the agenda, unafraid to recount his own experiences of using breakfast clubs and free school meals at times when his mother was unable to earn enough money to feed her children adequately.

“It has been fantastic to follow Marcus throughout the lockdown period,” he said.

“It’s not only that he got the Prime Minister to change his mind, but also what he’s done over the last few months. He is a top human being who has brought his own experiences as a kid into this conversation. He is using his position as a role model at Manchester United, one of the biggest names in the country, to affect people in a good way.

“We’re really proud of him and his family must be so proud of what he has achieved. He is a future leader, a future captain, maybe, of England, Manchester United, who knows?”

Rashford’s intervention has been part of a wider contribution to social debate by high-profile footballers.

Raheem Sterling, Tyrone Mings and Troy Deeney have also been prominent amid the Black Lives Matter campaign, which saw every player from all four clubs involved in yesterday’s re-opening of the Premier League take a knee before kick-off.

Players’ names have also been replaced on the back of their shirts with ‘Black Lives Matter’ for the first 12 matches of the restarted season, including United’s visit to Tottenham on Friday (20:15 BST).

“Footballers as a group have been criticised a lot, even over this lockdown period. We are an easy target at different times but we can also affect people in a good way,” said Solskjaer.

“The lockdown period has made people think about larger issues and given them a different perspective.

“Black Lives Matter has been an event in history. We all know this (racism) shouldn’t happen in 2020. It has been on the agenda for many years. We have talked about it and then it gets forgotten. We can all make a stand to say enough is enough.”