After a weekend of indecision, Rachelle Bingham made a last-minute call on Monday morning and kept her two young children at home rather than sending them to primary school. She was not the only one.

Ms Bingham who lives in Forest Hill, in Melbourne’s east said that her Whatsapp groups with other parents were sites of “mass confusion” on Monday, with some families going in to isolation early because they think the government is acting too slowly in the face of the coronavirus threat. 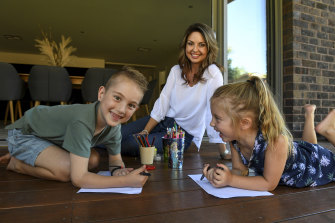 Rachelle Bingham has decided to keep her kids Hudson, 7, and Scarlett, 5, out of school.Credit:Penny Stephens

“Today a lot [of parents] have kept their kids home and now other parents are saying they feel bad for sending theirs to school," said Ms Bingham. "It’s stressful, for sure.”

She doesn’t expect Hudson, 7, or five-year-old Scarlett to go back to school before the end of term on March 27.

While only a handful of Victorian private schools have officially shut down, there were fewer faces in the classrooms of many other schools at the start of the week as parents, wary of risks to their children and themselves, withdrew students en masse.

Victoria's Chief Health Officer Brett Sutton said on Monday that school closures were not on the immediate horizon because only a “prolonged closure” would be effective and would present other costs, such as forcing up to 30 per cent of healthcare workers to miss work while caring for their children.

“I think when things are relatively controlled, why don’t we get on the front foot?" Ms Bingham said.

"For now it’s only two weeks of school and to slow the virus down, I’m fine with pulling them out early.”

“The main thing for me is just to protect the vulnerable people in the community.”

She said other parents were unsure how “social distancing” guidelines released on Sunday, such as staying 1½ metres away from each other and not shaking hands, applied to children.

“I feel for the teachers – they’re tasked with keeping the kids apart or having minimal contact but it’s just not possible in primary schools. My daughter spends most of her day at school holding hands with her friends.”

At six months’ pregnant and an asthmatic, fellow Melbourne mum Emma Roberts is herself in a higher risk group. As of Monday she will be keeping her four children, ranging from ages 16 to 1½, away from school and social events.

“We thought ‘well if they’re going to close all schools down eventually, is it more beneficial for us to keep them home now?’ ” Ms Roberts said.

“If our kids were to catch something and bring it home they may not be sick but it could make me very unwell.”

As a teacher on maternity leave, Ms Roberts feels confident enough to keep her children’s learning on track, at least until the end of term.

“If it were to go beyond six months, I’d start to worry my kids will fall behind. You just can’t do six hours of work at home … we’ll have another baby around soon as well,” Ms Roberts said.

With sport and other extra-curricular activities off the table, parents will also have the challenge of maintaining household harmony.

“My husband works as a landscaper and can’t take time off, so I’ve sat down with them and said ‘we’re going to be together for at least a month essentially, so we really need to work on this together’."

The symptoms of coronavirus include:

If you suspect you or a family member has coronavirus you should call (not visit) your GP or ring the national Coronavirus Health Information Hotline on 1800 020 080.