Meghan Markle wowed former gang members when she spoke ‘perfect’ Spanish during a visit to a Los Angeles charity with Prince Harry.

‘She spoke Spanish perfectly with one young woman,’ he told People. ‘She just went right into Spanish, which was a revelation — and it was very good.’ 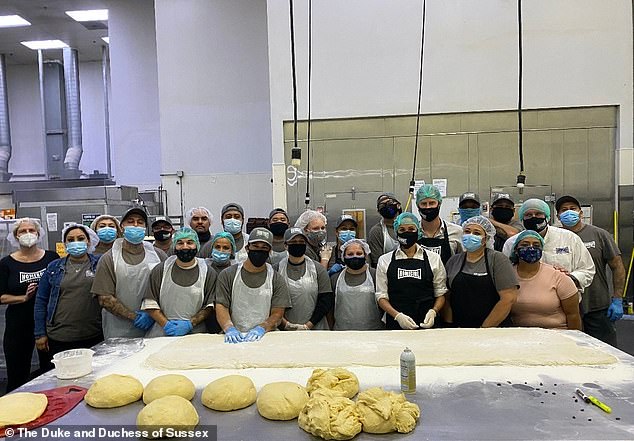 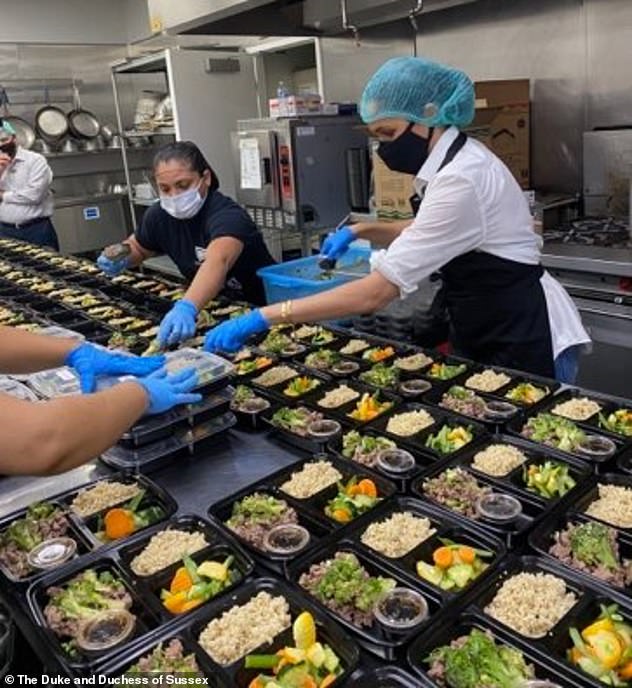 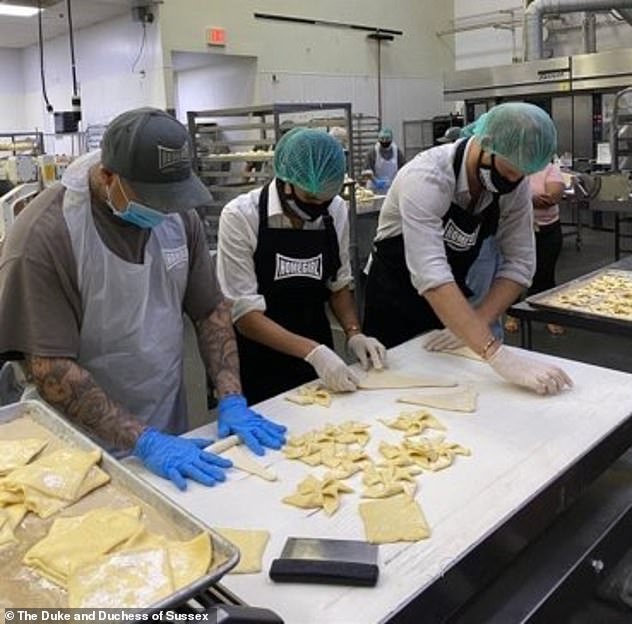 Learning: Father Boyle joked that Meghan was ‘quite good’ at baking in the kitchen, while Harry was ‘less’ skilled than his wife

Meghan is said to have learned Spanish during her time interning at the US Embassy in Buenos Aires, Argentina, while she was a student at Northwestern University; she also studied French for several years while filming Suits in Canada.

But it wasn’t just Meghan’s linguistic skills that impressed Father Boyle and the other volunteers during the Duke and Duchess of Sussex’s charity visit in June.

The charity founder also praised the mother-of-one’s baking skills, revealing that she was ‘quite good’ at preparing the croissants and other baked goods that Meghan and Harry made alongside the other volunteers during their trip to the charity – which works with ex-gang members and helps to provide food for the vulnerable.

However, while Meghan excelled in the kitchen, Father Boyle joked that Prince Harry didn’t possess the same natural abilities as his wife, joking: ‘Meghan is quite good at it… and Harry probably less so.’

Still, the couple – who wore gloves, face masks, and hairnets during the visit – made a very positive impression on their fellow volunteers, and on Father Boyle, who described them as being ‘completely engaged and very informal’.

He also praised the couple’s very obvious connection, explaining that, while they went out of their way to connect with the other volunteers in the room, ‘they’d always find their way back to each other’.

‘It was just sweet,’ Father Boyle added. ‘They seem to have a good time together. We all felt special that they chose to come to our place.’

He also revealed that the former royals arranged the visit shortly after the murder of George Floyd, who died at the hands of white police officer Derek Chauvin and three colleagues during an arrest over Memorial Day Weekend.

Father Boyle said that the mother-of-one – who has previously attended a Homeboy Industries workshop alongside her mom Doria Ragland – made very clear when she spoke to him that the couple wanted to get stuck in during their visit, explaining that the mother-of-one ‘didn’t want to have a long-table discussion or presentation or even a tour’.

The charity founder added that Meghan’s focus was ‘helping to address food insecurity in the country’ – an issue that she and Harry have centered much of their volunteer work around since moving to LA, where they were previously spotted delivering food to critically-ill residents in April.

At the time of the couple’s visit, Homeboy Industries shared snaps of Harry and Meghan working away in the kitchen on Instagram, while stating in the caption: ‘Thank you to Harry and Meghan, The Duke and Duchess of Sussex, for visiting and standing in kinship with our Café and Bakery teams yesterday!

‘Our staff were thrilled to work alongside them as they helped prepare food and learned more about our newly launched #FeedHOPE program, which employs our program participants to provide meals to food-insecure seniors and youth across Los Angeles in the wake of the COVID-19 pandemic.’

Meghan donned a smart white shirt and relaxed denim jeans for the volunteering effort, sweeping her hair into a low bun to tuck into her net.

Meanwhile Prince Harry opted to match his wife in a similar smart white shirt as he joined her on the production line.

The couple could be seen helping out to bake bread, as well as folding dough and sorting out food boxes for the vulnerable in their new hometown.

Meghan first met Father Boyle 20 years ago at a Homeboy Industry cooking workshop where she and her mother Doria made tamales.

Father Boyle, who has worked closely with Meghan’s alma mater, Immaculate Heart High School in Los Angeles, said: ‘The Duke and Duchess of Sussex were just “Harry and Meghan” to the homies.

‘They rolled up their sleeves and deeply engaged with our workers in the bakery and cafe. It was immediate kinship and heartening in its mutuality.’

Harry and Meghan’s spokesman said ‘the duchess mentioned that the spirit and style reminded her of the times she visited the Luminary Bakery in London’, a social enterprise that offers disadvantaged women in the UK new opportunities.

Mariana Enriquez, manager at Homegirl Cafe, said: ‘It was remarkable to share our Feed Hope program with Harry and Meghan.

‘They are both down to earth and kind. The staff was honored they took the time to see us, hear us and walk on our journey today. We will never forget it.’

A representative of the couple said the Duke and Duchess ‘connect deeply’ with the organization’s mission (which includes resources such as counseling, education, legal assistance, addiction recovery and employment ops) and feel it’s ‘a perfect example of how empathy, kindness, and compassion can change the world.’

The organization describes itself as ‘a beacon of hope in Los Angeles to brave men and women seeking to transform their lives after gang-involvement and incarceration.’

It also helps provide space for our clients to heal from intergenerational cycles of violence in a community of radical compassion. 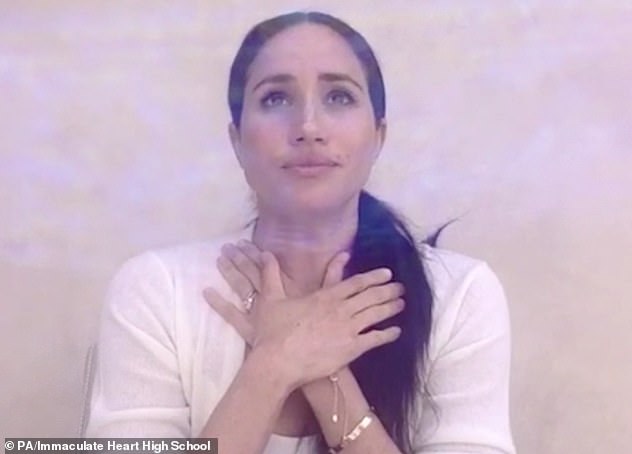 Heartfelt: Father Boyle said that Meghan got in touch with him after the death of George Floyd, which she addressed during a speech to graduating students at her alma mater (pictured) 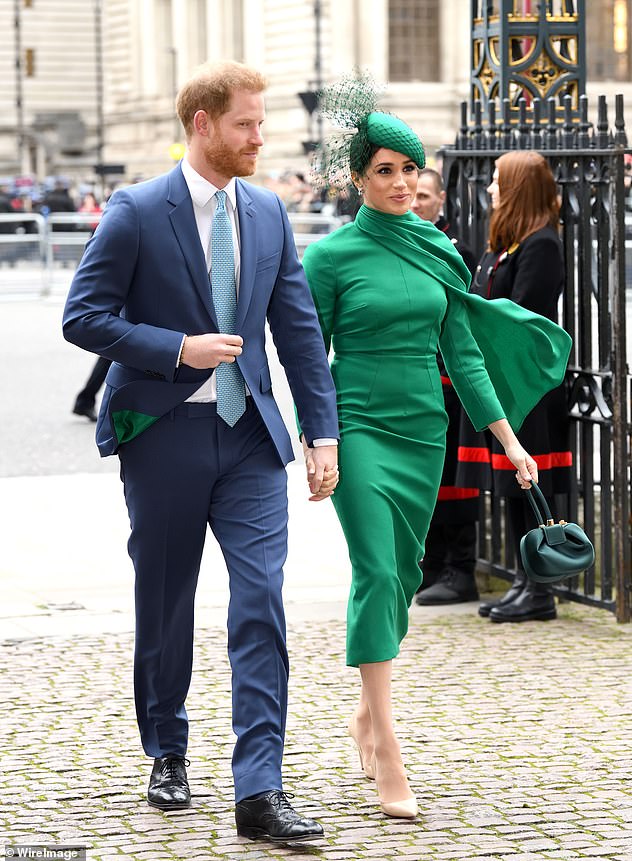 ‘Engaged’: Father Boyle said that Meghan and Harry (pictured in March in London) ‘seem to have a good time together’

It is the third time the couple have been seen volunteering during the course of the coronavirus pandemic. In April, Meghan and Prince Harry were spotted out on the streets of LA as they continued their volunteering work for charity amid the crisis.

The couple were seen linking arms and holding hands as they delivered packages to residents from the back of their $35,000 Cadillac XT5, having seemingly downgraded from the Porsche SUV they had used previously.

It emerged that the couple, who moved to Los Angeles with 11-month-old son Archie a month ago, have been distributing meals to the needy in LA for the Project Angel Food charity

A source close to the couple told the Daily Mail that they had hoped to keep their volunteering private but were glad the charity was being recognized.

Three weeks prior to the couple’s visit to Homeboy Industries, Meghan addressed Floyd’s tragic death in a speech made to her former high school, Immaculate Heart, telling graduating students during the video message that his life ‘mattered’.

Meghan, who attended the school from the age of 11 to 18, also named other African Americans who were killed in the US by police in recent years.

On speaking out about Mr Floyd, she said: ‘I wasn’t sure what I could say to you. I wanted to say the right thing and I was really nervous that it would get picked apart. And I realized the only wrong thing to say is to say nothing.’

The Sussexes initially moved to Canada after stepping down as senior working royals on March 31 but are now forging out new lives for themselves as they set up home in California.