Oh, the sweet and familiar sight of comedy festival! The throngs giving away flyers outside the town hall, the other throngs trying to avoid eye contact with them as they run the gauntlet of Swanston Street, the shy backpacker realising they really shouldn’t have taken this flyering job… 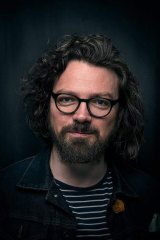 Every year, the town hall looks comfortingly familiar. The banners may change colour (they’re orange this year), but the rest remains the same. Hundreds queue to see their favourite breakfast radio host, trams roll by sporting posters of American sitcom stars you didn’t realise were quite that dirty live, and comedians nervously smoke rollies off to the side, three days into their inevitable festival flu. Or will it be coronavirus this year? Hopefully it will, and next year’s show will write itself.

But while the physical landscape may appear unchanged, the zeitgeist has made a secret shift in recent years. Comedy is getting weird, and it’s really quite delightful. In her 2018 show I Wish I Owned a Hotel for Dogs, Claire Sullivan put on a series of hats she’d made, played with picture books, gave out lollies, and sang. She also made pointed political statements in among the mess and absurdity and left faces beaming. And there were a lot of faces; despite being relatively unknown, Sullivan sold out her entire run.

Absurdist comedy is on the rise, and it’s not just Sullivan’s sold-out audiences that think so. Three of the past five Barry Awards (now known by the slightly less catchy name of Melbourne International Comedy Festival Award for Most Outstanding Show) have gone to acts that sit outside of the classic ‘‘man in neat casual observes the world with a microphone’’ genre. Sam Simmons put a burrito on his foot to talk about child abuse; Zoe Coombs Marr simultaneously mocked the Daves of comedy and trained clowns while cutting her head open from head-butting a glass ceiling; and Sam Campbell … well you just have to see Sam to get it.

It’s a shift that’s happening not just within the festival but culturally as well. Look at memes. The visual in-jokes that dominate daily online discourse for younger generations, memes are a phenomenon that has taken over social media, to the consternation of many. Why are the kids so obsessed with that image of Bernie Sanders once again asking for their financial support? Why is that lady arguing with the cat?

Historically there are precedents for such nonsense. The Dada art movement came about as a response to the atrocities of World War I, and this new shift towards the absurd seems to be doing the same. The climate is all over the place, there are housing crises across the world, and the US President has been charged with almost everything it’s possible to be charged with, yet also had a cameo in Home Alone 2. To say the world has stopped making sense would be an understatement, and culture is responding in the only way that seems fitting: by putting a burrito on its foot. 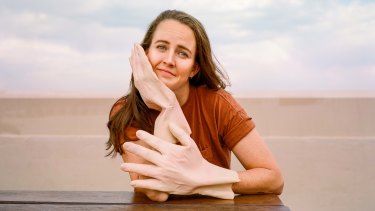 Absurd it may be, but it’s hardly nonsensical. Coombs Marr, who won the 2016 Barry Award and whose work in theatre includes playing a critic by literally speaking out of her arse (including contemplative pencil nibbles) agrees there’s a line between nonsense and absurd.

“I think that’s a misconception with a lot of surreal or absurd work,” she says. “‘Oh, it’s totally random',” she says, dropping into the character of befuddled punter. “‘Do you just take a bunch of drugs?’ No! It’s actually very nerdy, considered, constructed stuff!” 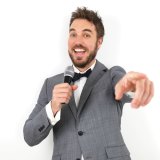 “Stupidity is a great mirror,” Joshua Ladgrove tells me. Ladgrove, along with his sometime alter ego Doctor Professor Neal Portenza, has been filling rooms on the festival circuit for years now. Last year he won a long overdue Golden Gibbo for his surreal, interaction-intensive comedy. Ladgrove’s shows are often chaotic. One Ladgrove-as-Portenza show I saw ended with the stage littered with clothes, a trampoline, broken chairs and Ladgrove himself covered in fake blood. The audience held their water pistols and cried laughing. It made sense at the time.

“I’m asking the audience to scratch a bit deeper and look behind the randomness,” Ladgrove says. “Absurdity is a great method of reflecting back on the world how stupid it is. We all dress in the same clothes and do the same things, but we don’t stop to appreciate how dumb it all is.”

These artists are asking audiences to consider narratives beyond the linear tropes we’ve come to expect. “The way I think of stuff isn’t in a straightforward stand-up way,” Sullivan says. “It makes sense in my mind but for other people it’s absurd. I can’t think in the same way as a stand-up.”

Coombs Marr agrees. “It’s not the way that I view the world. I find linear narrative very difficult, so I see my shows more in shapes and patterns and loops and callbacks and reprises.”

This structural shift towards the unpredictable mirrors a cultural one. Whereas taboos of the past centred on profanity, sexuality and scatology, non-linear absurd comedy asks us to look at the most current of taboos: certainty, or the lack thereof. 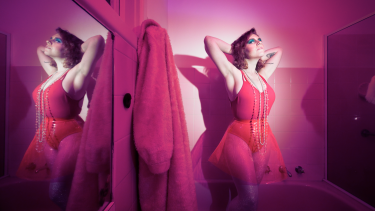 “It’s OK to be silly,’’ Sullivan says. “The world’s on fire! We’re all going to die!” She says it in a chipper way, but it underlines a concern shared by many. “I’ve been thinking a lot about the future and will there be one,” Coombs Marr says. “I think it’s a very difficult thing to be a teenager right now.”

Given bushfires, coronavirus, and the doomsday clock's moving closer to midnight, doom seems imminent. “I think it’s a part of humanity to think about ‘well, what if this actually ends?’," says Coombs Marr. “It’s a driving human force in a way. What if we all die? And what can we do to prevent that happening?”

If that all seems a bit too gloomy, I’ve done both the comics and their beaming audiences a disservice. And if the accolades and sold-out rooms are anything to go by, it seems the growth of absurdism will continue. “I think audiences have changed a lot,” says Coombs Marr. “With YouTube and the amount of comedy specials that are out there, audiences now are so comedy-savvy. People are seeing a lot of comedy so they want to be kept on their toes and they need to be surprised.”

Surprise is one thing these artists are not lacking, and for those detractors who lament the shift from old-school stand-up, Coombs Marr has a simple message. “Comedy’s changed? Yes! That’s it’s job.”