A mother who used a maternity bracelet tracker to keep an eye on her baby’s movement throughout her pregnancy claims the accessory prevented her daughter from being stillborn.

Lyndsey Thompson, 30, who lives in Telford, Shropshire, admitted herself to hospital a week before her due date after she noticed her unborn child’s activity had drastically slowed down.

The mother-of-two claims her daughter may have died due to complications she experienced during her pregnancy, but the fate was avoided by her early admission and induced birth. 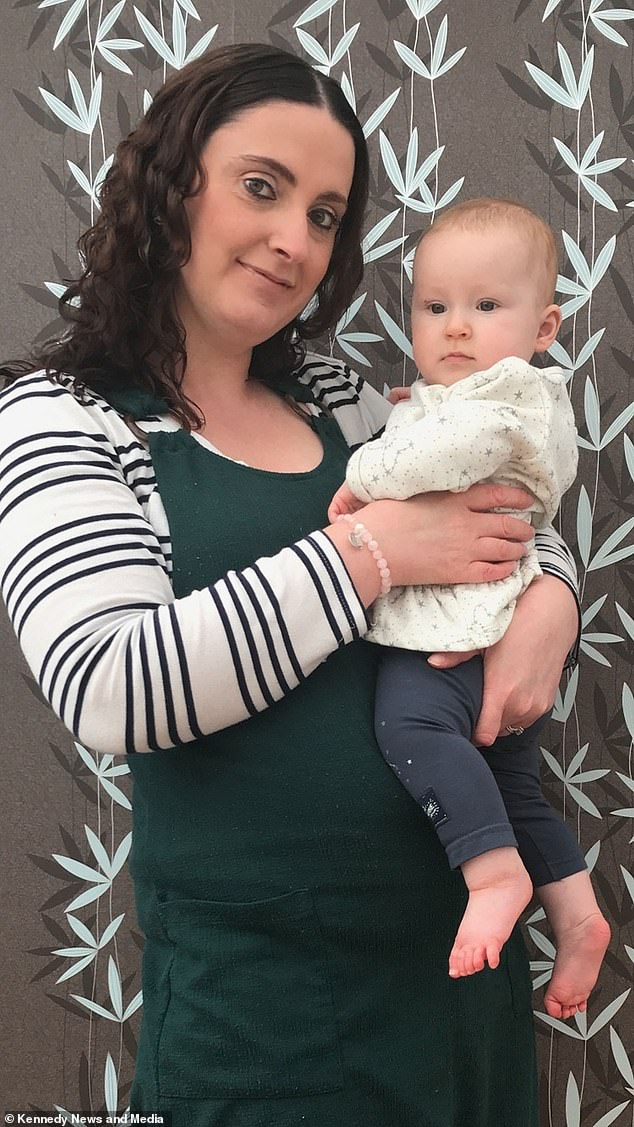 Lyndsey Thompson, 30, who lives in Telford, Shropshire, explained how a maternity movement bracelet tracker helped to prevent the stillbirth of her daughter. Pictured: Lyndsey wearing the bracelet while holding seven-month-old Emily Thompson 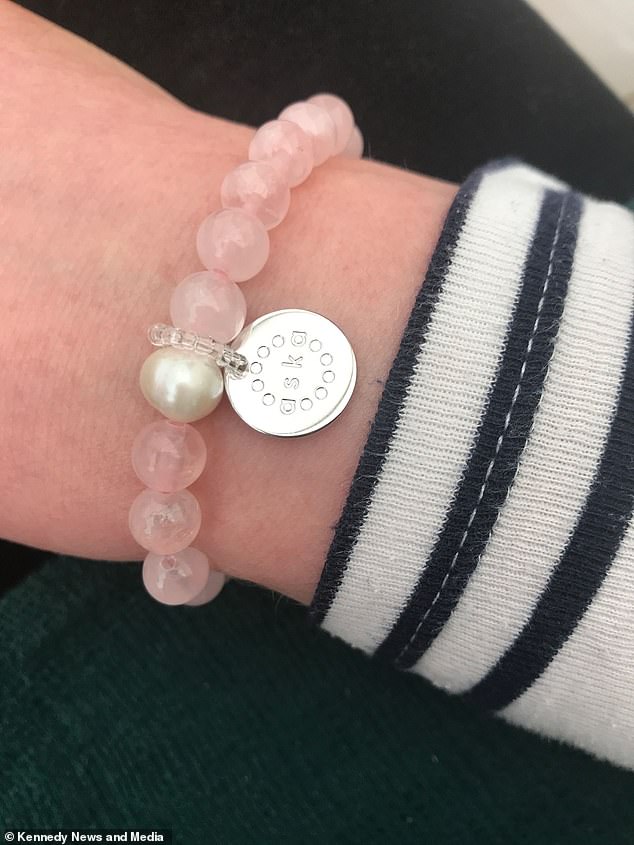 Mother-of- two Lyndsey, said the bracelet (pictured) gave her the confidence to go to the doctors with her concerns when she noticed a change in her baby’s movements

Lyndsey said: ‘The bracelet saved my baby’s life. I definitely credit it for ensuring she made it safely into the world because I was worried something was going to go wrong.

‘It gave me the confidence to go to the doctors with my concerns because I had proof from the bracelet and could tell them exactly how many times she’d moved.

‘It was great having that reassurance and to know I wasn’t wasting the doctors’ time. It’s incredible that something as simple as a bracelet could do all that.’

Also mum to six-year-old Chloe, Lyndsey had previously used a phone app to track movements but found the bracelet more practical as she was able to wear it and easily log on the go. 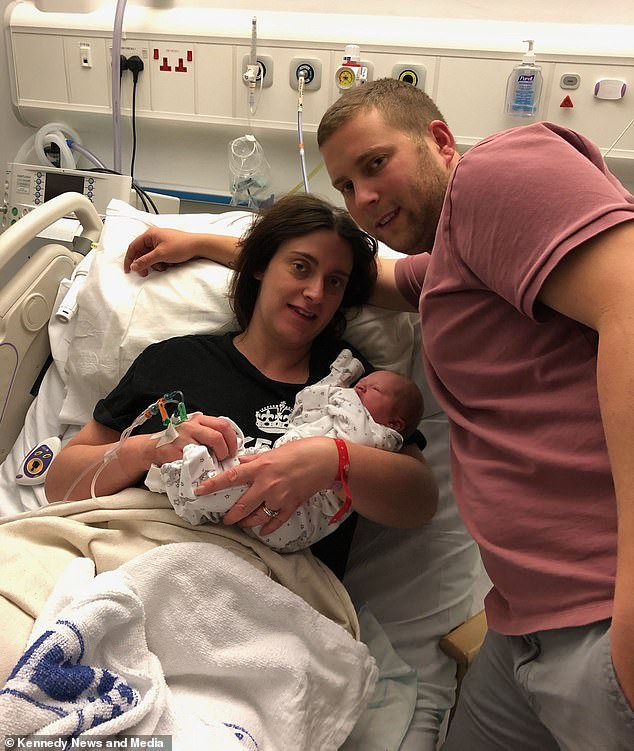 Teacher Lyndsey, who is married to Christopher Thompson, 33, revealed that she began using a bracelet to track her baby’s movement because she couldn’t use her phone while at school. Pictured: Lyndsey and Christopher at the hospital after Emily’s birth

The mother-of-two, who is married to engineer Christopher, 33, used a prototype of the Aska Maternity Movement Bracelet.

The bracelet features a small loop and charm that the wearer slips across each bead on the bracelet every time the baby moves.

Lyndsey said: ‘When I was pregnant with my first I tried a phone app to track movements but obviously you can’t have a phone at school.

‘I was so busy even at lunchtime and by the time I got to the end of the day I wouldn’t be able to remember what movements I’ve had.

‘At my 20-week scan my midwife offered me a bracelet that was being used in trials as I’d mentioned reduced movement in my first pregnancy. 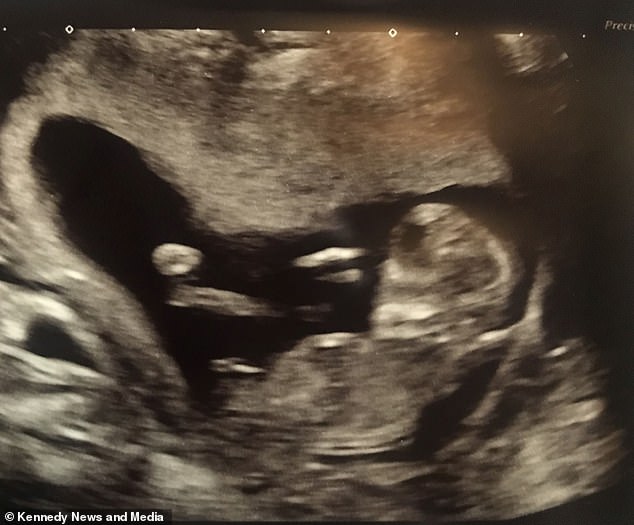 Lyndsey experienced a number of complications throughout her pregnancy including respiratory problems and having to take antibiotics after catching a sickness bug. Pictured: A scan Lyndsey had when she was six months pregnant

‘Having the bracelet reassured me that I’d had a certain number of movements. The bracelet helped if I felt movement while I was teaching; I might be sat with a group of children and could just put my hand on the bracelet and move it across.

‘I would also show the children the bracelet and involve them too, which was nice.’

Lyndsey had already faced numerous complications in the pregnancy including respiratory problems due to her severe asthma and having to be put on antibiotics throughout after catching sickness bugs.

But when she noticed that Emily’s movements started to slow down at 34 weeks, concerned doctors took growth scans every few weeks to monitor her progress.

NHS guidance states that if mothers-to-be notice their baby is moving less than usual, or there’s a change in the pattern of movements, it may be the first sign their baby is unwell. 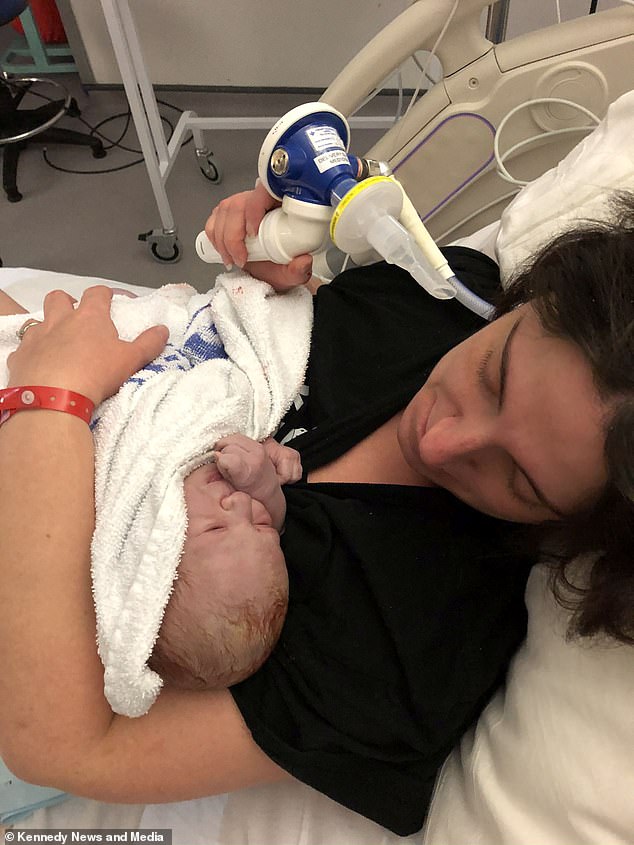 Lyndsey, who noticed her baby moving less around the 20-week point, said a scan revealed her baby was slightly on the low side in terms of movement. Pictured: Lyndsey in hospital after having Emily

The NHS also urges mums-to-be to contact a midwife or local maternity unit immediately if the baby’s movements have slowed down so their wellbeing can be assessed.

Lyndsey said: ‘As the weeks went on, past the 20-week point, I felt the movements were getting less and less.

‘After having a growth scan they said she was slightly on the low side and to monitor them as time passed.’

When Lyndsey noticed she wasn’t moving the bracelet charm as often due to reduced movement a week before her due date, she decided to go to Princess Royal Hospital in Telford. 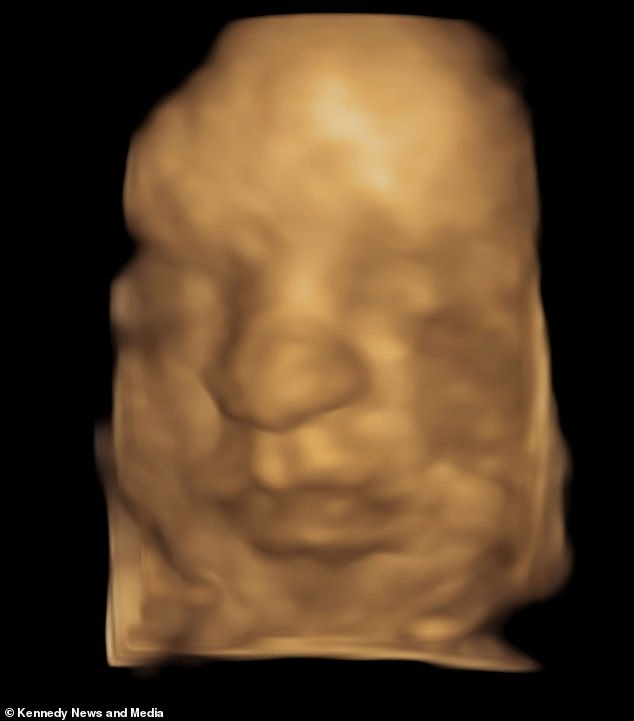 Lyndsey was induced by doctors at Princess Royal Hospital in Telford, after they examined her and checked the baby’s heart. Pictured: A 4D scan from when Lyndsey was seven months pregnant 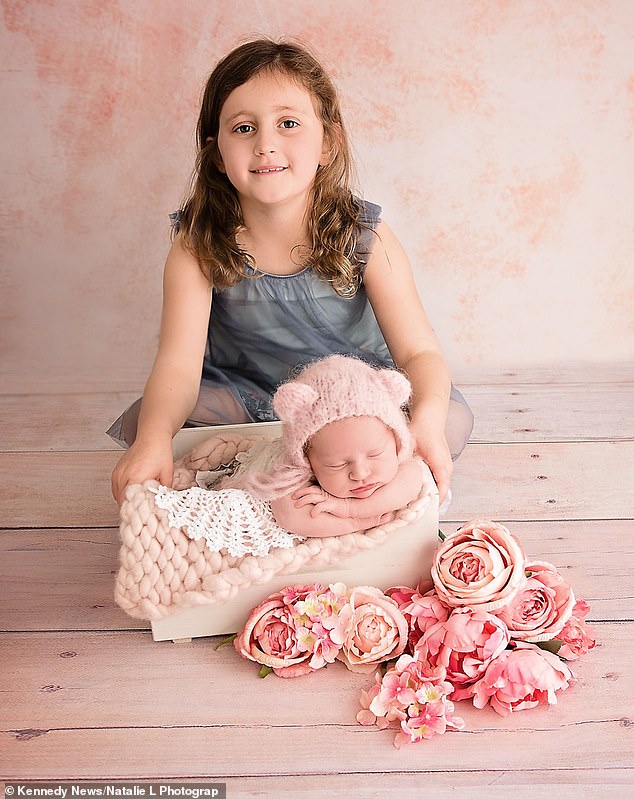 Lyndsey admits she had sleepless nights worrying that something would go wrong during her pregnancy. Pictured: Her daughters Chloe, six, and newborn Emily, seven-months-old 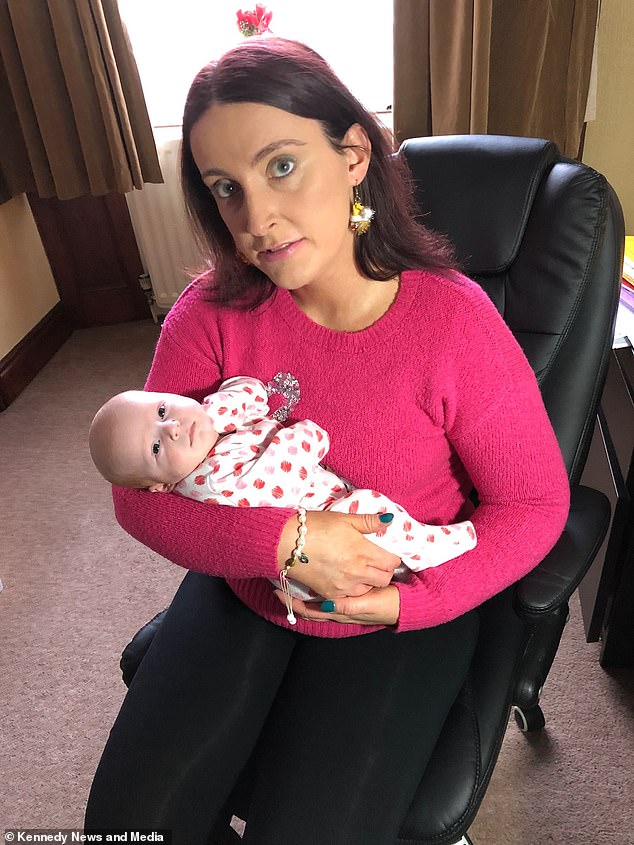 Lyndsey who is keeping the bracelet as a keepsake, said she would definitely recommend it to other expectant mothers. Pictured: Lyndsey and Emily

Doctors examined Lyndsey, monitored the baby’s heart and decided to induce her due to the numerous issues she’d faced during the pregnancy.

Lyndsey said: ‘I would normally have between six and eight movements a day, when I was only having three and it was later in the day I decided to get it checked out.

What is the Aska Maternity Movement Bracelet?

The bracelet was created by mother and NHS worker Louise Macleod.

The beaded bracelet is a practical tool for tracking a baby’s movement in the womb.

Mothers are tasked with slipping a bead across each time they feel their baby moving.

A white freshwater pearl is used to show the start of the counting process each morning.

Once all of the beads have reached the end, mothers then work the jewels back to the start.

‘Directly off the back of me saying she hasn’t moved as much as she should have done they put the bands round and monitored her heart rate.

‘Because I’d had a number of issues in the pregnancy – including reduced movements – they offered to induce me.

‘I was a bit worried at first, and had a sleepless night worrying something would go wrong, but there was a real risk of leaving it and not doing anything.’

Seven months on, Lyndsey has kept the bracelet as a memento and plans to show Emily the life-saving piece of jewellery when she’s older.

Lyndsey added: ‘I’m keeping the bracelet as a keepsake – to show my daughter what I used to make sure she was OK. I would definitely recommend it to other mums.’

The bracelet is the brainchild of mum and NHS worker Louise Macleod who has now teamed up with Davidov London Jewellery.

Davidov London Jewellery CEO Natasha Davidov said: ‘We are extremely proud that we are able to support expectant mums with a pretty and practical tool in the form of a lovely piece of jewellery that can provide reassurance and potentially save babies’ lives, which now is as important as ever.

‘The bracelet can be used even after the pregnancy like a feeding reminder and that makes it every mum’s loyal companion and a sentimental memento to treasure forever.’ 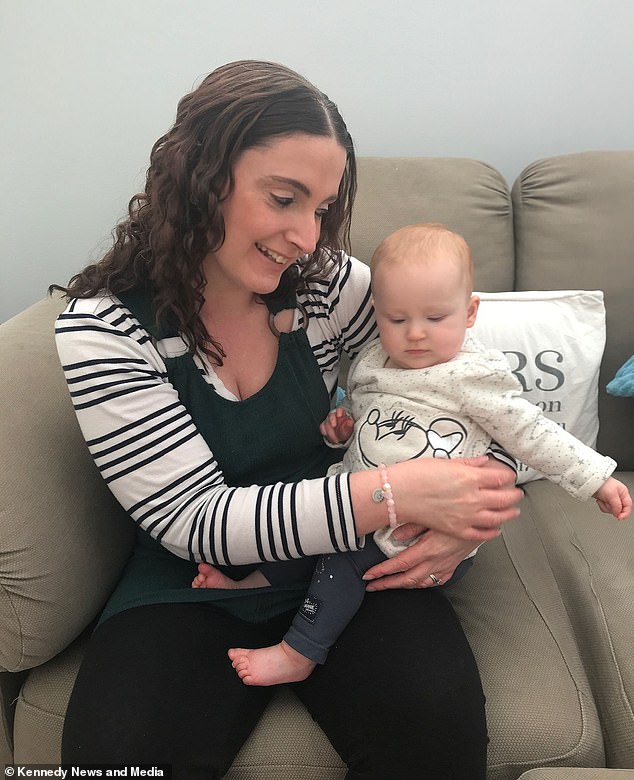 The Aska Maternity Movement Bracelet is available from www.askamaternitymovementbracelet.com