One of the abiding storylines of stately home fiction centres on the housemaid who becomes pregnant to the lord of the manor or his son. But in this delicate adaptation of Graham Swift’s novella, Mothering Sunday, something very different is going on.

The aristocrat is considerate enough to arrange reliable birth control and the housemaid has plans that don’t include a wedding, which is fortunate since her lover is reluctantly going ahead with marriage to someone else. 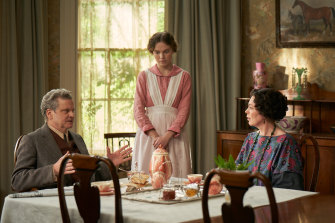 Swift is known for the kind of layered, allusive narratives that are not easily wrangled into the three-act structure favoured by commercial filmmakers yet this is the fourth of his books to find its way on to the screen. It’s probably because he’s a magician when it comes to conjuring up the mood and atmosphere of a particular time and place.

It’s a gift that tends to disarm any scepticism you might be harbouring over implausible bits of plot and characterisation and Mothering Sunday is a highly effective example of his style. It’s not an easy film but if you can adjust to its tempo, you’ll find much to like.

Its most decisive events take place on a single day but their reverberations go on sounding down the years, allowing Swift to offer up observations on memory and how it works in the making of a writer. He takes you a long way from Downton Abbey and in Alice Birch, who wrote the film’s script, he has a like-minded interpreter. She’s just been adapting the best-selling novels by Ireland’s Sally Rooney, another writer with a highly developed taste for shades of gentle melancholy.

The housemaid, Jane Fairchild – played by Australian Odessa Young – has grown up in an orphanage and gone straight into service but along the way she’s acquired a love of books. The story doesn’t explain how. Nor does it try to account for her confident way of carrying herself. Instead, it successfully lulls you into a willingness to set aside these questions about her past to concentrate on where she’s going next.

It’s 1924 and her employers, the Nivens (Colin Firth and Olivia Colman) are still in mourning for the sons they lost on the battlefields of World War I. He copes by camouflaging his grief with a nervy pretence at cheerfulness. She has lapsed into long, sullen silences but once a year, on Mothering Sunday, they meet old friends to have lunch by the river.

In keeping with stately house tradition, downstairs takes the day off, and Jane has a rendezvous with her longstanding lover, Paul Sheringham (Josh O’Connor). They’re about to spend the morning making love in his family’s empty manor house.

It’s a meeting of equals in both body and mind. Between the long, languorous sex scenes the pair also find pleasure in conversation, with Paul reminiscing ruefully about his happy childhood with his older brothers, all of whom were killed in the war. Aware of Jane’s fascination with writing, he seems to feel she might give form to these memories with her writer’s eye.

O’Connor is an actor who always seems to be regarding life with a raised eyebrow and the rapport between him and Young turns them into loving co-conspirators meditating on the fluidity of time – the way in which past, present and future overlap.

And to mirror the theme, the script frequently flashes forward to Jane’s later life in London, where she’s begun to realise her ambition. What’s more, she’s involved in another affair. It’s touched on briefly in the novel but Birch’s script delves more deeply into it and Young, who was 22 when the film was shot, glides into the role of a 40-something with remarkable ease. It’s a very assured performance.

The countryside and its manor houses make their own comment on the passing of time. After Paul has gone off to meet his fiancee, Jane, still naked, wanders through the house, knowing it will be her last visit and doing her best to imprint its history and character on her memory. It’s as if the death of Paul’s brothers has left the house becalmed and that Jane is absorbing its sorrows, already foreseeing the fact that she will return to them in her maturity as a writer.