The coronavirus has canceled events across the globe, but the outbreak is not stopping the US from regaining its human spaceflight launch capabilities.

NASA and SpaceX officially announced plans to send the first American astronauts aboard an American rocket to the International Space Station in mid-May – the first time since 2011.

The space station has been accessible to astronauts only through the purchase of seats on Russian capsules launched from Kazakhstan.

SpaceX’s Falcon 9 rocket will launch Crew Dragon, with NASA astronauts Bob Behnken and Doug Hurley aboard the spacecraft, from Launch Complex 39A at NASA’s Kennedy Space Center in Florida. 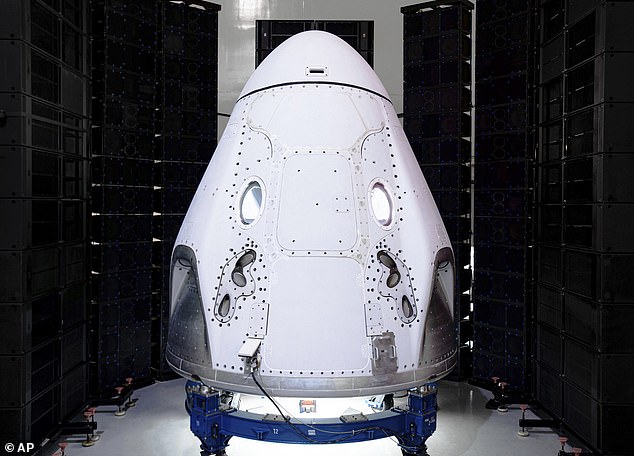 NASA and SpaceX officially announced plans to send the first American astronauts aboard an American rocket to the International Space Station in mid-May – the first time since 2011. Pictured is the Crew Dragon set to take the men to the ISS

NASA said it is ‘proactively monitoring the coronavirus (COVID-19) situation as it evolves.’

‘The agency will continue to follow guidance from the Centers for Disease Control and Prevention and the agency’s chief health and medical officer and communicate any updates that may impact mission planning.’

The launch is part of NASA’s Commercial Crew Program, which has partnered with the American aerospace industry.

‘The goal of the program is to provide safe, reliable, and cost-effective transportation to and from the space station, which will allow for additional research time and will increase the opportunity for discovery aboard humanity’s testbed for exploration,’ explained NASA. 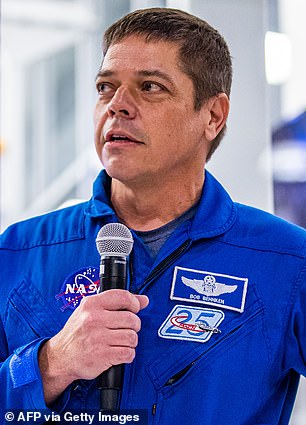 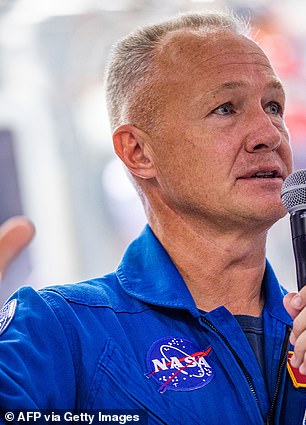 NASA astronauts Bob Behnken (left) and Doug Hurley (right) are two of the four set to launch aboard Crew Dragon, but will be the first to board the craft this year.

The official announcements comes a week after SpaceX’s president and COO Gwynne Shotwell revealed the California company is ‘gunning for May’ to fly astronauts aboard its Crew Dragon to the International Space Station.

Shotwell noted that NASA astronauts set to take the craft are currently in training by should be ready to go in two months.

The Commercial Crew Program will not position SpaceX as a front runner for space travel, but will also return human spaceflight capability to the US – a feat that has not been done in a decade.

NASA astronauts Bob Behnken and Doug Hurley are two of the four set to launch aboard Crew Dragon, but will be the first to board the craft this year.

After Crew Dragon’s demonstration mission with crew is complete, Victor Glover and Mike Hopkins will be the first two NASA astronauts to launch aboard Crew Dragon to the International Space Station (ISS) for a long-duration mission. 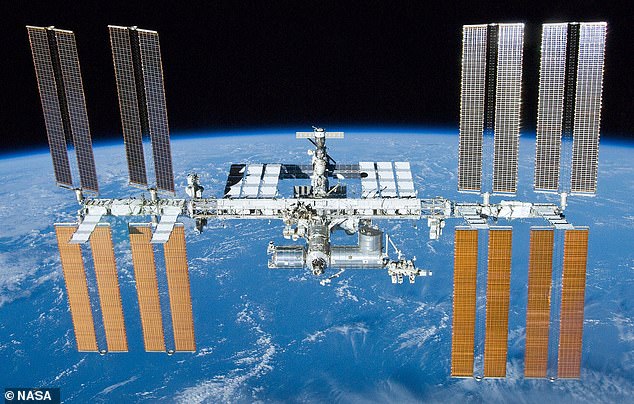 The Commercial Crew Program to the International Space Station (pictured) will not position SpaceX as a frontrunner for space travel, but will also return human spaceflight capability to the US – a feat that has not been done in a decade

Shotwell also explained that SpaceX has plans to reuse the Crew Dragon capsules when sending crew into space.

Altogether, SpaceX has reused three of the earlier versions of the capsule, called Cargo Dragon, to deliver payloads to the ISS.

‘Working date for SpaceX’s Demo-2 launch is May 7,’ tweeted Berger.

‘Dragon is in good shape. Launch date is fluid and mission may move into late April, or push later into May depending on a number of variables not hardware related. No final decision yet on duration.’

During the test, the craft launched into high-altitude and the boosters were exploded while the capsule was aborted at high-velocity – the most stressful point of the launch.

NASA’s commercial crew program manager said at the time that the launch abort test was ‘our last open milestone’ before sending astronauts Doug Hurley and Robert Behnken to the International Space Station.

The capsule has gone through ups and downs throughout the past several years. In April last year, an explosion engulfed the empty capsule in fire and smoke. 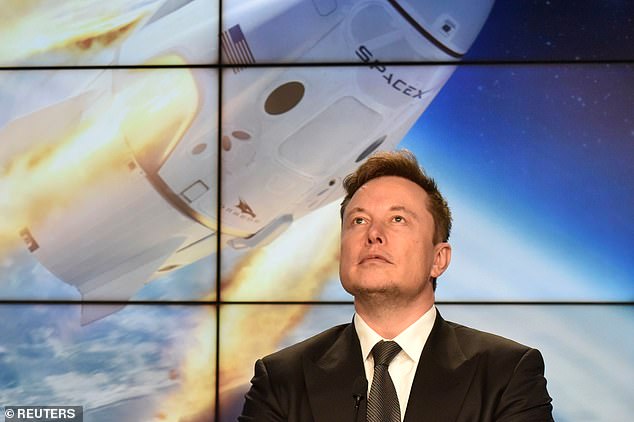 SpaceX CEO Elon Musk, pictured with an illustration of the Crew Dragon capsule, has long sought to bring Crew Dragon back to form after an explosion derailed progress last April

The incident was set off by a leaking component and completely destroyed the capsule – a glitch that has contributed to SpaceX’s delayed timeline for Crew Dragon, which it’s developing for NASA

As SpaceX works to get its Crew Dragon operational the company is working to reach a similar milestone in a test of its other craft, Starship.

The company hopes to fly its Starship rocket 12 miles into the air and then land it back on the ground, upright.

The test, which the company filed a permit with the FCC for, could take place as soon as mid-March.

Once the the capsule will be cleared for launching astronauts but also eventually clear the way for civilian space tourism.

WHAT IS SPACEX’ CREW DRAGON CAPSULE?

The March 2 test, the first launch of U.S. astronauts from U.S. soil in eight years, will inform the system design and operations (Artist’s impression)

The capsule measures about 20 feet tall by 12 feet in diameter, and will carry up to 7 astronauts at a time.

The Crew Dragon features an advanced emergency escape system (which was tested earlier this year) to swiftly carry astronauts to safety if something were to go wrong, experiencing about the same G-forces as a ride at Disneyland.

It also has an Environmental Control and Life Support System (ECLSS) that provides a comfortable and safe environment for crew members.

Crew Dragon’s displays will provide real-time information on the state of the spacecraft’s capabilities, showing everything from Dragon’s position in space, to possible destinations, to the environment on board.

Those CRS-2 Dragon missions will use ‘propulsive’ landings, where the capsule lands on a landing pad using its SuperDraco thrusters rather than splashing down in the ocean.

That will allow NASA faster access to the cargo returned by those spacecraft, and also build up experience for propulsive landings of crewed Dragon spacecraft.