NASA’s SLS launch today marks the first day of a landmark six-week trip around the moon, the first of its kind since 1972. Rather than land on the lunar surface like previous flights, the system will test an empty Orion capsule by carrying it in a loop before crashing down in the Pacific Ocean in October. Engineers hope to test the payload’s hardware before astronauts climb in for a manned flight in 2024 that could pave the way for a Mars mission, meaning today’s launch could prove monumental.

Where can you watch the Artemis moon launch today?

The SLS is due to take off from Florida’s Kennedy Space Center this afternoon at 8.33am local time (1.33pm BST).

The time marks the start of a two-hour launch window allotted to NASA crews today, meaning it could set off any time from then.

When ready, those crews will kick the 98-metre system’s engines – the most powerful NASA has ever made – into gear, starting a 320,000-mile journey. 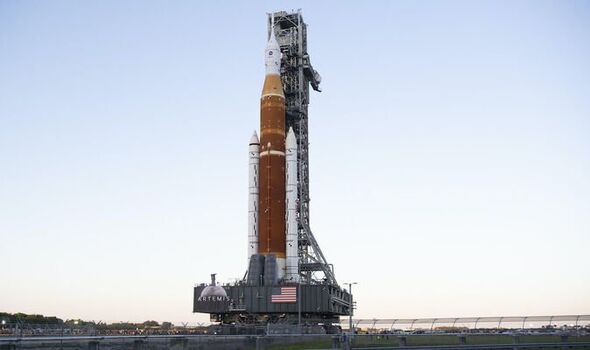 People who want to watch the landmark event can watch the launch unfold via several avenues.

Those living nearby in Florida can attend in person, as NASA typically opens its Cape Canaveral station to the general public.

The centre offers commentary and “bleacher seating” and has exhibits and attractions for those who want to stay longer.

Most people won’t live nearby, but they can enjoy an even closer view via a series of cameras mounted near the launchpad.

NASA carries a dedicated livestream for each of its launches, with monitors watching each of its main sites.

The agency also has its own television channel app which people can download via IOS and Android.

People can also watch on the following platforms:

People watching today may have end up waiting for some time before they see the SLS depart, according to engineers.

In an update, they said they have identified a fuel link on the SLS that could delay the launch.

The update reads: “While liquid oxygen loading into the interim cryogenic propulsion stage continues and core stage tanks continue to be replenished with propellants, engineers are troubleshooting an issue conditioning one of the RS-25 engines (engine 3) on the bottom of the core stage.

“Launch controllers condition the engines by increasing pressure on the core stage tanks to bleed some of the cryogenic propellant to the engines to get them to the proper temperature range to start them. Engine 3 is not properly being conditioned through the bleed process, and engineers are troubleshooting.

“Teams also are assessing what appears to be a crack in the thermal protection system material on one of the flanges on the core stage. The flanges are connection joints that function like a seam on a shirt, are affixed at the top and bottom of the intertank so the two tanks can be attached to it.”