Former News Corp chairman and chief executive John Hartigan believes the NRL and broadcasters should look to immediately re-negotiate long-term television deals in an effort to shore up their uncertain futures amid the coronavirus crisis.

With sport forced into COVID-19 lockdown around the globe, competitions such as the NRL and AFL stand to be cruelled financially if they lose significant portions of their seasons to the virus and they are left stranded without the millions in broadcast rights revenue that prop up the games. 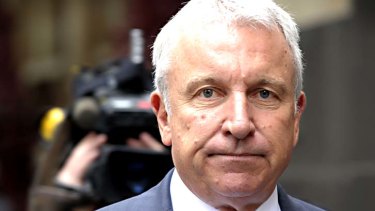 John Hartigan says now is the time for pragmatism.Credit:Craig Abraham

“That’s something they would have to be contemplating, just because of that cash flow and the certainty of it. It’s an opportune time,” Hartigan said on Tuesday.

“The overriding thing for the broadcasters and the sports is certainty. When you’ve got unprecedented uncertainty … the ability to ensure cash flows becomes imperative but also into the future. There is only one thing that gives all the codes certainty and that’s the tie-up with the broadcasters.”

As sports wrestle with what the future looks like, another prominent media figure, who wished to remain anonymous, said it needed to be explained to players that “maybe they’re not going to be paid a million dollars [a year] anymore, that maybe it’s more like $500,000, and if not it could be zero.”

ARL Commission chairman Peter V'landys has called for support for rugby league under the federal government's stimulus package and has said he does not expect broadcasters to continue paying their instalments without content being provided.

Asked on Tuesday about the prospect of re-negotiating its television deal, V'landys said: "Every option is on the table, and that's another option, absolutely. We've never come across anything like this before that actually puts the game at risk. We will take any action necessary to ensure the viability of the game. We don't know where this is going to land."

While the NRL is bracing for the worst, Rugby Australia’s own negotiations for a new deal have been thrown into turmoil just as it had been in talks with its latest potential partner, Optus.

Hartigan, who believes it is a “certainty” that the football seasons will be suspended due to COVID-19, said it was also in the interests of the broadcasters not to allow popular sports to fall over. But they are no longer in anywhere near as healthy a position as they once were, with Foxtel’s debts rising to $2.3bn, Seven’s borrowings topping $700m and Hugh Marks, the CEO of Nine, publisher of this masthead, announcing last month the company would cut $100m from its free-to-air business.

“The reality is they need long-term arrangements with the most popular sports,” Hartigan said of the broadcasters. “If it means taking advantage of this downturn then so be it.

“But you’ve got to recognise that with the changing nature of audiences, all of a sudden you’ve got a position where the free-to-air broadcasters have got nowhere near the deep pockets they once had and you’ve also got the sporting codes in equally bad shape, so pragmatism becomes essential. Broadcasters have always talked about sports rights going down and if they’re going to, the landscape is ripe now.”

The NRL is pressing on with the second round of its competition this week behind closed doors and plans on trying to make up for any games lost later in the year even if the season has to run until November.