Tasmania has drastically tightened its borders from the mainland, forcing all non-essential travellers arriving in the island state to quarantine for two weeks to stop the spread of the coronavirus.

Premier Peter Gutwein declared a state of emergency on Thursday morning, announcing Tasmania was introducing "the toughest border measures in the country". 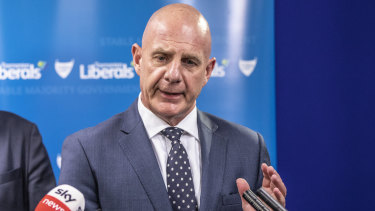 Tasmanian Premier Peter Gutwein: “We are going to introduce the toughest border measures in the country.” Credit:AAP

Anyone seeking entry to Tasmania, including returning residents, from anywhere else in Australia will be required to self-isolate for 14 days from midnight on Friday.

Only essential travellers – such healthcare workers, emergency workers, defence personnel, air and ship crews, specialists and essential freight personnel – will be allowed into the state without having to self-isolate.

A breach of the quarantine period could result in a $16,800 fine or up to six months' imprisonment. The Tasmanian government is considering using GPS tracking to enforce the quarantine.

Mr Gutwein said he "made no apologies" for the drastic restrictions.

"We are going to introduce the toughest border measures in the country. Only essential travellers will be allowed into Tasmania without going into quarantine," Mr Gutwein said.

"We know that for some it will create disruption, but our aim is to ensure that we protect the health, wellbeing and safety of Tasmanians and we would ask people to work with us as we implement these measures and as they are managed over coming weeks."

He suggested the new measures might not apply to people travelling to Tasmania for medical treatment and stressed commercial freight would continue to arrive.

"Our ships will continue to run, the TT Line (the operator of the Spirit of Tasmania ferry), will have, I expect, more opportunity to carry more freight into the state as a result of the fact that there will be, I expect, less people travelling," Mr Gutwein said.

"I want to be clear to all Tasmanians – we are not going to shut the borders to those supplies that we need."

Tasmania has had 10 confirmed cases of COVID-19 – the illness caused by the most recently discovered coronavirus – including three new cases reported on Wednesday. By contrast, NSW has had 267 and Victoria 121.

The move by Tasmania comes after a group of doctors in Western Australia called for its state government to close its borders from the rest of the country. WA has had only 35 confirmed cases of COVID-19.

The Tasmanian Premier said the measures were needed to stop the spread of the virus from the mainland.

"Today we take that next step to ensure that we provide the toughest border measures in the country," he said.