Victoria Evans is an ordinary woman about to take on an extraordinary challenge.

Despite having barely even picked up an oar, the 32-year-old has decided to attempt to break a world record for rowing solo across the Atlantic this time next year.

The record for a female rower is 49 days, 7 hours and 15 minutes, but only 15 have successfully completed the Trade Winds 1 route.

Evans isn’t fazed. A self-proclaimed ‘non-sporty girl’, she says she didn’t find sport until her mid-twenties. And that discovery was life-changing.

“I haven’t done any rowing,” she laughs.

“I’ve learnt to row for the challenge. I wanted to do something that I could train for in the UK. We have plenty of water.

“It was at a point in life where I’d endured a reasonable amount of adversity and suffered with issues as a result of that adversity.”

Evans suffered a turbulent upbringing which led to the problems in her adult life.

“I had an eating disorder for a long time and depression. There’s only so long you can outrun things like that.”

So how do you outrun your problems? The answer for Evans was simple.

“I started running. I think running is a good gateway into sport for most people, and once I got into that I took up cycling and then I did my first triathlon.”

Triathlons led to marathons. Marathons led to hill runs. Hill runs led to mountain climbing. In 2017 Evans conquered Kilimanjaro, Gran Paradiso and Mont Blanc in the space of five weeks! All whilst having a successful and demanding career as a sports lawyer.

“I found that with each of those sporting achievements that you expand your definition of who you are and what you’re capable of. You have a reason to look after yourself and fuel your body properly and a sense of purpose, I guess.

Amazing morning at Stamford Bridge giving a speech to 130 school girls about the Atlantic Row, a career in sport and using sport to overcome adversity and drive change. The theme was “Inspire to Empower”. Spending time around young minds is so invigorating! #empower @ChelseaFC pic.twitter.com/idVPeTKXlq

“Now I’ve overcome those things, I really want to use that to encourage other people to benefit from what sport has to offer.”

And that’s why Evans is entering uncharted waters… She hopes to raise £50,000 for the Women In Sport charity.

“I’ve found sport to be a huge driver of positive change in my life and want to bring other people along on that journey.

“It’s a lot harder to bring women and girls with you because they don’t have the same opportunities, so I wanted to take on a challenge of sufficient magnitude that it allowed me a platform to leverage the conversation around those issues and hopefully inspire a few women and girls along the way.”

It’s not just training for the physical demands of rowing – two hours on, two hours off for the entirety of the world record attempt – Evans is also trying to prepare for the loneliness she’ll experience at sea.

There are points in the ocean where the closest person to her will be in space. 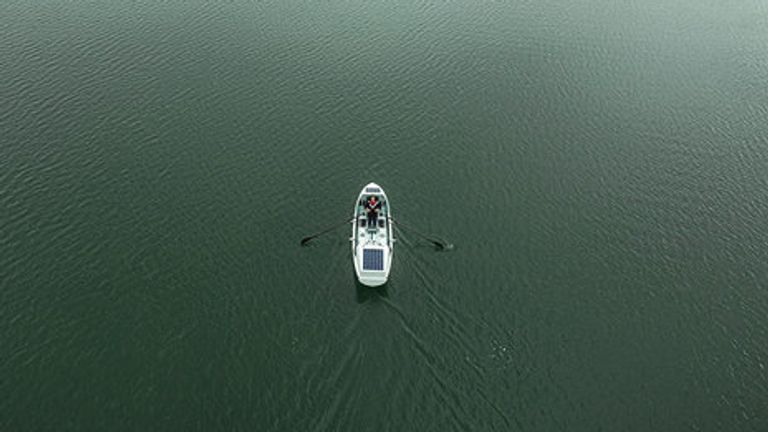 “I’ll spend a certain amount of time rowing on my own to simulate what it’s going to be like, but you can’t ever fully 100% prepare to spend the best part of two months on your own.

“There’s no one on the water nearby. You’ll have a team on land who’ll track the weather and your routing and talk tactics but it’s really just you out on the ocean.”

Evans will set off from Gran Canaria in early 2021 – spending her 34th birthday alone in her boat – before she reaches the end of the route in Barbados.

She wants her story to inspire other women to challenge themselves.

“Back yourself,” she says. “And know that you’re capable of far more than you think you are.