Australia's swimmers are being urged to deal with their emotions before deciding their Olympic futures.

Swimming Australia's head coach Jacco Verhaeren says athletes could take months to digest their disappointment of the likely postponement of the Tokyo Games. 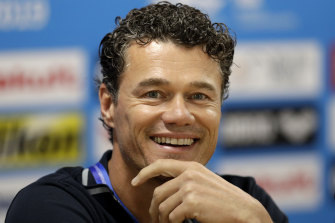 Australia has pulled out of the Games, due to start on July 24, because of the coronavirus pandemic, believing the sporting showcase will be delayed until next year.

"We are focusing on providing immediate care for the ones who need it," Verhaeren said on Tuesday.

"But also long-term care because [for] some people reality will kick in, in a matter of weeks or months even.

"This is not going to be a quick fix.

"… Any big decision about the future we would make now would be too emotional and would definitely be without enough knowledge."

With the government banning indoor sports activities indefinitely, Verhaeren said it was as yet unknown what impact halting training would have on swimmers.

"Nobody is obviously pleased with the fact that the Olympics can't go on as planned, I think that is a normal response," he said.

"Everybody understands that this decision had to be made given the situation we're all in … it's the right thing to do.

"I think we have to wait and see a little bit … it will become emotional in the next few hours, the next few days, the next few weeks, maybe even months, because people have seen their immediate goal suddenly disappear.

"In saying that, we definitely told the coaches and the athlete leaders that we're potentially looking at a postponement for 12 months.

"And without knowing all the details, 12 months is definitely an overseeable amount of time."

Meanwhile, Australia's Olympic cyclists have also been given the unfamiliar advice to slow down by performance boss Simon Jones before they ponder a potential Games in 2021.

Cycling Australia's performance director admitted he was shocked but understanding of the AOC's decision on Monday to plan for the Games' likely postponement.

His first order to cyclists – some of who had been selected for Tokyo 2020 last week – was to "take stock" and focus on their mental health, while he also confirmed the CA staffer who had contracted coronavirus was recovering well.