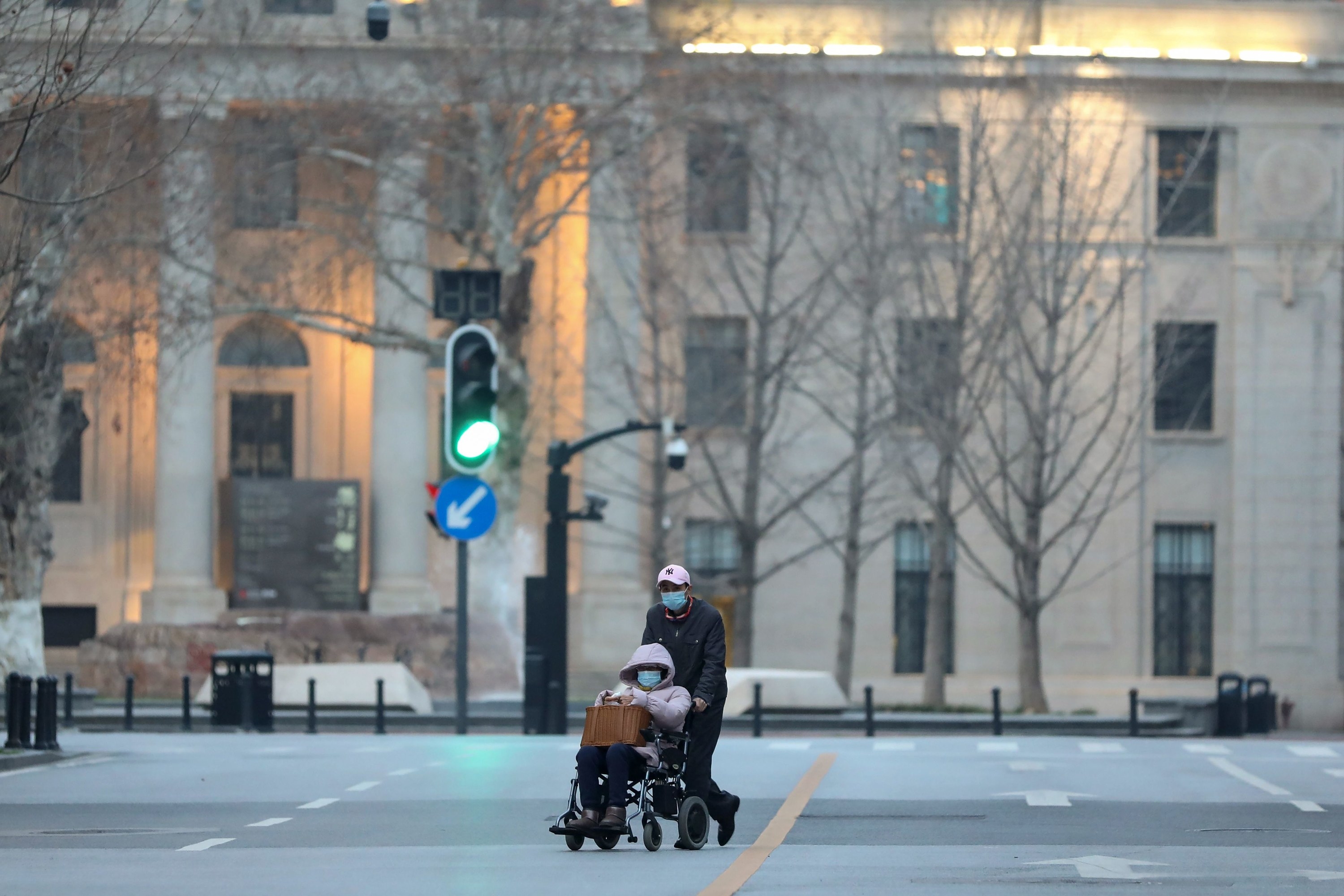 Public health officials escorted by armed police through the epicenter of an outbreak. Government officials, in an effort to contain an epidemic, announcing rules forcing people off the streets. City residents fearing for their lives as a new virus kills the frail and infirm among them. That same fear leads to widespread support for draconian public health measures as long as they keep people safe.

The spread of the coronavirus has reminded us of the darker side of epidemic control. These kinds of “security-forward” responses are among the most common ways we deal with epidemics. While the COVID-19 epidemic has made these scenes familiar to us all, the above description applies just as well to the disease epicenter of Wuhan, China, as it does to how authorities right here in the US have responded to both real and perceived local epidemics.

Consider Los Angeles, where the same enforcement-based approach favored by China’s government is, with little fanfare, being deployed to fight a more localized outbreak. The epidemic in question? Flea-borne typhus (Rickettsia typhi), a relatively benign member of a group of bacterial pathogens better known for causing deadly epidemics in Medieval Europe starting in the 15th century. Since the advent of modern antibiotics, typhus has been a preventable disease, and flea-borne typhus is rare in the US. So when the Los Angeles County Department of Public Health announced in 2018 that the number of yearly cases of flea-borne typhus had suddenly doubled to over 60 — and that a majority of the ill were people who were homeless — the reaction was swift.

News articles with headlines like “California Sees Resurgence of ‘Medieval Diseases’” and “Are LA’s Medieval Diseases Coming to Your City?” stoked a climate of fear and made the city’s residents who were experiencing homeless their main target. The result was a new layer of security imposed upon Skid Row in the name of public health: sanitation workers wielding hoses, bleach, and trash compactors, escorted by a platoon of police to do daily cleanups. Their mandate? Destroy or seize any encampments and belongings that might contribute to the spread of disease.

The battle to clean up Skid Row has been waged for decades, but the added dimension of disease transformed it from a gentrifying mission into a wholescale public health battle against a terrifying epidemic. Suddenly, “cleaning up the streets” took on a more literal — and urgent — dimension.

Just 130 miles due south of Skid Row, in the Mexican border town of Tijuana, we recently saw another example of public health deployed as a useful pretext to take action against undesirable populations. When a caravan of Central American migrants numbering in the thousands arrived in Tijuana in 2018, the Trump administration made clear how vehemently opposed it was to even considering their claims for asylum. The extent of the administration’s hostility soon became obvious, with the deployment of 15,000 troops to the border amidst the announcement of a national emergency.

While Trump has from the outset of his presidency articulated a xenophobic vision of America, it was notable that the justification for his heavy-handed response to the migrant caravan was articulated in the language of public health and disease. Within a subset of right-leaning media, the trope that the 2,700-strong caravan was riddled with HIV/AIDS, tuberculosis, and chickenpox was repeated ad nauseum, even reaching as far as the words of the president himself. It was a chilling case of the dehumanizing potential of epidemic language, and a defining moment in the presidency of Donald Trump.

While COVID-19, LA’s Skid Row, and Tijuana’s migrant caravan have little in common, they have all produced a common outcome: a fear of epidemics that has made us willing to accept restrictions that we would otherwise decry as infringing deeply upon our inalienable rights. In China, which has gone further than anywhere else in combining totalitarian politics with state-of-the-art surveillance technology, the fear of a generalized pandemic has given President Xi Jinping’s government maximum leeway to crack down on its citizens.

The international community has mostly applauded the Chinese government’s response. In January, four weeks after the initial outbreak, the World Health Organization praised China for the “commitment from top leadership, and the transparency they have demonstrated.” By late February, the scientist who led a WHO mission to assess the situation on the ground in China stated it plainly: “Hundreds of thousands of people in China didn’t get COVID-19 because of their aggressive response.”

It’s clear that epidemics of this magnitude require a dedicated response, and that at least some of the controls that China put in place likely saved lives. What’s less clear, though, is which ones actually moved the needle, and which ones — like censoring coronavirus posts on the popular social messaging app WeChat — may have inadvertently caused more cases to go undetected.

While perhaps meant to defuse global panic, the praise from the international body allowed the Chinese government to sidestep mounting criticisms of delays, censorship, and the detention of doctors who publicly voiced concerns about the epidemic. And with the number of cases still growing — roughly 93,000 cases and over 3,100 deaths globally so far — some experts are starting to question the effectiveness of blanket curfews and police-enforced quarantine zones.

But it’s not just China’s extreme responses to the COVID-19 epidemic that are under scrutiny. Much closer to home, experts are recognizing that one of the most dangerous symptoms of any epidemic — be it real or fabricated — is fear. Dr. Ricky Bluthenthal, associate dean of social justice at the University of Southern California’s Keck School of Medicine, works just a few miles east of Los Angeles’ Skid Row, though he is often found in the neighborhood meeting with frontline workers and homeless residents. From his vantage point, the single biggest impact of the flea-borne typhus outbreak has been a ratcheting up of fear of the homeless. That, in turn, has provided the city government with broad impunity to achieve long-standing security and beautification goals.

Under the direction of Mayor Eric Garcetti, the city of Los Angeles launched the aggressive, daily sweeps in 2018 at a cost of $30 million per year. Given the stakes, officials claim that the city government had been left with no choice but to take draconian steps to, in the words of a city spokesman, “keep our streets and sidewalks safe for everyone.”

Bluthenthal sees a direct link between epidemic fear and widespread public acceptance of policies that would otherwise be recognized as nakedly authoritarian. “It’s kind of a disaster. We just keep digging the ditch deeper by making people more vulnerable and disrupting their lives.”

The upshot is that effective solutions to homelessness, which are often more complicated and take longer to implement, are a hard sell with scared citizens who favor the quick fix of daily crackdowns. “Mobile or walk-in centers where people can deal with their natural needs and get cleaned up,” says Bluthenthal, running down a list, “Daily trash pickup and deploying garbage cans so that people can throw their stuff away easily. Giving people lockers that are publicly available so that they can store their most valuable things on a regular basis.” These, he says, are just some of the ways that the city could reduce the risk of disease while also increasing the resilience of homeless people.

In the case of the migrant caravan, the use of epidemic language was wildly successful in helping the Trump administration gain support for its anti-immigration goals, despite the absence of an actual epidemic. After migrant families—including mothers with infants and small children—gathered at the border fence in Tijuana, the U.S. military fired tear gas and rubber bullets to violently disperse the asylum seekers. That military response foreshadowed the cruelty that the migrants would endure once detained by the Department of Homeland Security, which includes the ongoing separation of migrant families and long-term detention of young children.

While the street sweeps in Skid Row and the caging of migrant children have little to do with the spread of COVID-19, all three episodes make plain the power—and peril—of stoking fear of epidemics. Bluthenthal, the public health expert, has seen firsthand how ineffective the security-forward approach can be in trying to stem disease. “It seems crazy to try to quarantine your fifth largest city,” he says of Chinese efforts to create a perimeter around a city of 11 million people. “From a public health history standpoint, I don’t think that anyone’s tried to do that before.”

Bluthenthal is right: The scale of the security perimeter that Xi Jinping’s government has imposed on China to contain COVID-2019 is truly unprecedented, and it speaks to the faith the Chinese government has in its own capacity to control its population by any means necessary.

And despite that, there has been a surge of COVID-19 cases in Italy, South Korea, Japan, and Iran in recent weeks, with many observers now convinced that a global pandemic is more than likely. All of this has renewed questions about the effectiveness of a Chinese authoritarian response that leaned heavily on twin fears: of the virus itself, and of severe punishment for those that contravene the government quarantine.

What’s clear, though, is that far from the exception, China’s muscular response is a prime example of how governments tend towards authoritarianism in the face of epidemic fear. As the COVID-19 epidemic continues to spread, our ability to recognize the line between effective public health and all-out repression will continue to be tested. With COVID-19 now spreading to every continent except Antarctica, we can start to compare different governmental responses to the virus and tease out which components — even those as basic but effective as calls for people to consistently wash their hands — can help stem the epidemic, and which — like threats of severe punishment — might make things worse.

Only then will we really know which aspects of China’s response were effective, and which were simply pretext for authoritarian action. Let’s hope the line between the two doesn’t disappear completely in the face of our terror at becoming infected.

Dan Werb, PhD, is an epidemiologist and assistant professor at the University of California, San Diego. He is the author of City of Omens: A Search for the Missing Women of the Borderlands.