Victoria will soon become Australia’s first state with tailor-made pandemic laws, with the state government’s contentious legislation poised to clear its final hurdle and pass the upper house on Thursday.

The responsibility to declare pandemics and issue health orders during such a health crisis will shift from the chief health officer to the premier and health minister from December 16, when Victoria’s state of emergency expires.

Upper house MPs debated the Public Health and Wellbeing Amendment (Pandemic Management) Bill 2021 for an epic 21 hours from 3pm Tuesday until noon Wednesday, before it was sent back to the lower house with minor amendments and ushered through just after 7pm on Wednesday.

Debate on the bill in the upper house was scheduled to resume just after 11.30am on Thursday, so that it could face a final vote. It was expected to pass without much fanfare, thanks to crossbench support from Greens leader Samantha Ratnam, the Reason Party’s Fiona Patten, Andy Meddick, of the Animal Justice Party, and Transport Matters representative Rod Barton.

The proposed laws were the focus of intense public debate over the past month, and central to a series of protest rallies in Melbourne’s CBD.

Under the rules, Thursday’s debate was restricted to the minor amendments previously approved by the lower house. 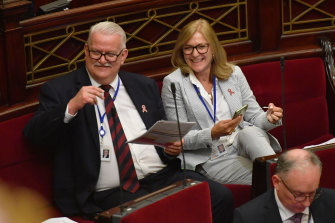 Outside Parliament on Thursday morning, before that final debate, Health Minister Martin Foley said he was hopeful the Legislative Council would pass the bill.

Victorian Ombudsman Deborah Glass on Wednesday warned it was inevitable there would be future questions about the bill, considering the speed at which it was drafted. A review of the legislation was enshrined in the law to happen 18 months after it gets royal assent.

“This is why I have … encouraged the government to ensure the pandemic legislation is subject not only to review, but to independent review; to subject it to proper scrutiny in the light of experience,” Ms Glass said.

Our Breaking News Alert will notify you of significant breaking news when it happens. Get it here.